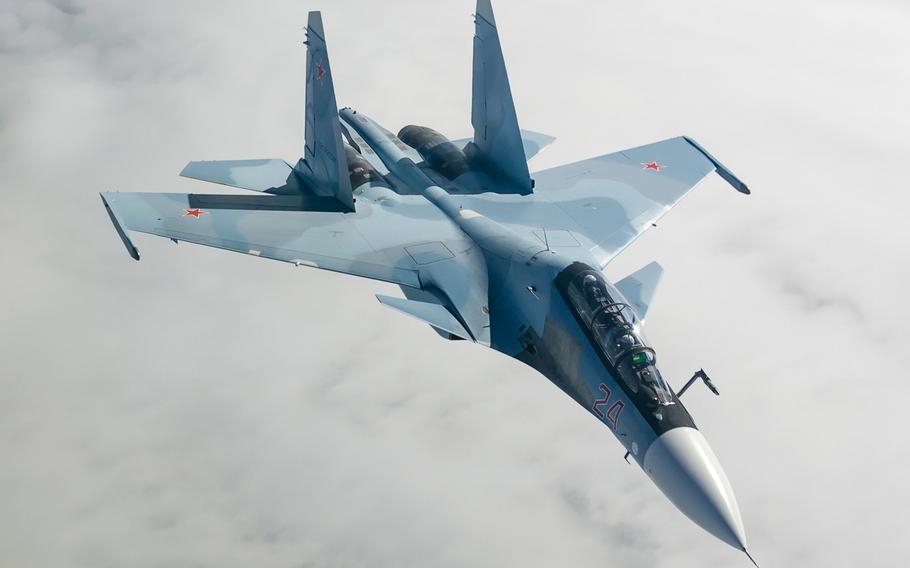 But analysts say the presence of the Coots — a naval electronic intelligence version of the old airliner bristling with phased-array side-looking radar, long-range cameras, infrared sensors and sophisticated eavesdropping equipment — is evidence of Russia’s long-term plans and the way nations participating in the Syrian campaign view one another as potential foes.

Western leaders, including President Barack Obama, have warned that Russia — whose forces started bombing Syrian rebels at the end of September — were risking getting bogged down in the five-year Syrian conflict.

“Of course (Russian President Vladimir) Putin doesn’t have an exit strategy,” said Labib Kamhawi, a Jordanian analyst. “The Russians are in Syria to stay.”

Moscow’s forces launched their first attacks in Syria to prop up President Bashar Assad against rebels — not only the Islamic State but against insurgent groups supported by the United States and its allies. The U.S. believes there can be no lasting peace in Syria or final victory over the Islamic State as long as Assad remains in power.

“Using the Russian air force to support Syrian President Bashar Assad’s ailing war effort went against all that (the U.S.-led) coalition has been trying to achieve in the past year,” said Alan Warnes, editor of Air Forces Monthly magazine.

Not only is the Russian campaign designed to keep Assad in power, but it is offering Moscow the opportunity to test weapons and doctrine as Putin rebuilds his military, which was decimated after the collapse of the Soviet Union.

“Through its operations in Syria, Russia is testing its capabilities to conduct air campaigns. It is a first for post-Soviet Russia and will shape Russia’s future air campaigns,” said a recent report by STRATFOR, a global intelligence firm based in Austin, Texas.

Russia has already demonstrated it can strike targets throughout Syrian and Iraqi territory if necessary, it said.

On Thursday, Bloomberg News reported that the U.S. Air Force had temporarily halted manned flights inside an area known as “Box 4,” in northern Syria because of the threat posed by newly deployed Russian SA-17 surface-to-air missiles. The area along the Turkish border, also known as the Azaz Corridor, is a major infiltration route for jihadist and other anti-government forces. It is now being squeezed by government troops, supported by Russian air stirkes, and militias pushing east from Aleppo and by fighters of the Kurdish Democratic Union Party pushing westward.

Analysts have pointed out that the array of warplanes, missiles and support aircraft deployed to the region are not the types of weapons needed for fighting the Islamic State or other rebel groups — mostly a light infantry force equipped with basic weapons. Instead, the Russians are using weapons intended for countering modern conventional powers.

These include the Sukhoi Su-30SM Flanker multirole fighters and Su-34 Fullback all-weather fighter-bombers. All are designed to operate in conditions against sophisticated air defenses — which the Islamic State doesn’t possess.

The Russians aren’t the only parties using equipment designed for opponents far better armed and sophisticated than the Islamic State, the Nusra Front and other rebel groups in Syria.

The U.S. arsenal also includes top-of-the-line equipment, including the stealth Lockheed F-22 Raptor air superiority fighters, intended to provide air dominance in conflicts with the world’s most advanced militaries. And coalition partners such as France and Britain have used their latest Eurofighter Typhoon and Dassault Rafale interceptors in the air campaign against Islamic State forces.

Analysts say that it is overkill to use sophisticated weapons against a low-tech opponent like the Islamic State. The old, low-flying A-10 Thunderbolt II ground-support jets employed by the U.S. Air Force from its base in Incirlik, Turkey, are far more effective against such light infantry forces, they say.

“It’s worth keeping an eye out for such deployments, because they’re an indication of where the parties see danger coming from” said Ed Blanche, a Beirut-based analyst and member of London’s International Institute of Strategic Studies.

He noted that after the Turks shot down a Russian Su-24 Fencer fighter-bomber, Moscow immediately deployed its ultrasophisticated, long-range S-400 air defense missiles to the Bassel al-Assad airbase near the Syrian port city of Latakia, from where the Russian squadrons have been operating.

They also equipped their attack jets and fighter escorts with the off-boresight Vympel R-27 dogfighting missiles, “in a clear indication that their potential opponents are Western fighters rather than Islamic State forces,” Blanche said.

Early in the five-year conflict in Syria, NATO deployed several Patriot anti-aircraft and anti-missile batteries in southern Turkey, but these have never been used.

Hisham Jaber, a retired Lebanese general and military analyst, said that all parties were using Syria as a testing ground for high-tech weapons systems.

He said that Britain and France appeared to be using the bombing campaign in Syria to show off the capabilities of their warplanes to potential buyers in the lucrative Middle East arms bazaar.

Although U.S. plane makers still dominate regional markets, in the past year, Dassault has won deals to supply its twin-jet fighter-bomber to Egypt, India and Qatar, while the Eurofighter consortium has sold its multirole aircraft to Kuwait, Saudi Arabia and Oman.

The Russians, in particular, have surprised military experts by launching long-range Kalibr cruise missiles at extremist targets from both frigates in the Caspian Sea and from a brand-new diesel-electric submarine in the Mediterranean, Jaber said. The Kalibr, compact enough to be carried by small submarines and warships, is changing perceptions about the reach and effectiveness of small warships.

The conflict has afforded unprecedented opportunities for the powers involved to monitor and learn from one another’s operations and tactics, Blanche said.

A good example is the Il-18, the rough equivalent to the Air Force’s RC-135 and the Navy’s P-3 Orion aerial spies. In 2001, a signals intelligence Orion was involved in a midair collision with a Chinese fighter over the South China Sea.

The main purpose of sophisticated platforms like that on all sides appears to be the collection of intelligence on other powers involved in the campaign, rather than snooping on the Islamic State, said Miroslav Lazanski, defense correspondent for Serbia’s Politika daily, who visited the al-Assad airbase last month and noted the presence of the Il-18s.

“What’s immediately obvious at the airbase is that the Russians are preparing it for a very long deployment,” he said.

Previously, the only Russian presence in Syria was a small naval installation in the Mediterranean port of Tartus, established in 1971 and located about 50 miles south from the airbase. Western defense analysts have long speculated that Russia’s strategic goal in Syria was to preserve its only military bridgehead in the Middle East.

Lazanski listed base infrastructure improvements at al-Asad, such as runway and apron extensions, a refurbished control tower, new housing, canteens, parking lots and other facilities, as signs that the Russian military had long-term plans for the facility.

“In the future, the Russians won’t need aircraft carriers in the Middle East,” he said. “They’ll just have their airbase in Syria.”