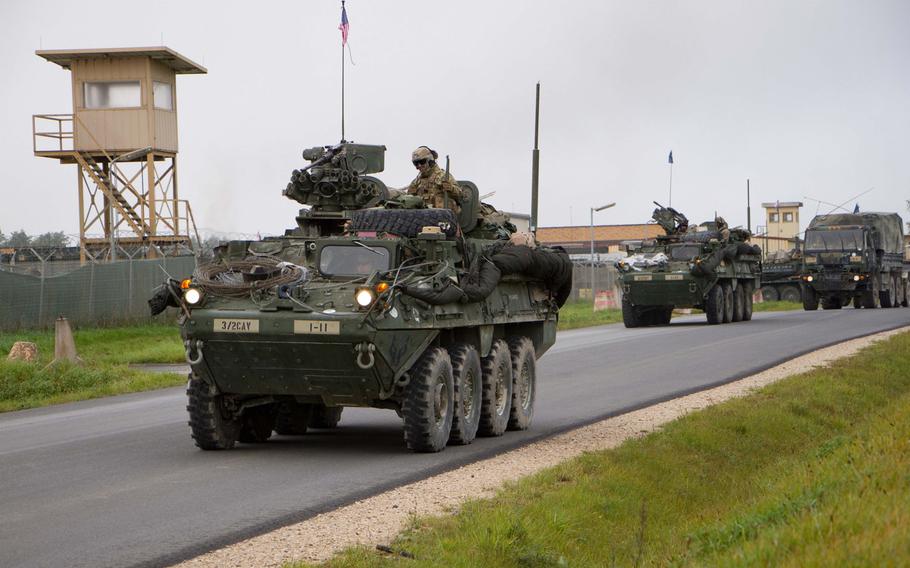 U.S. soldiers with the Army's 2nd Cavalry Regiment drive their Stryker armored fighting vehicles during their 680-mile road march from Vilseck, Germany, to Orzysz, Poland. They will be part of Battle Group Poland in support of NATO's Enhanced Forward Presence initiative, which is intended to deter potential Russian aggression. (Jennifer Bunn/U.S. Army)

The Russian military has renovated an underground bunker 50 miles from Poland that could be an active nuclear weapons storage site, a nuclear watchdog group said Monday.

A series of satellite images analyzed by the Washington-based Federation of American Scientists show one of three underground bunkers in the Russian enclave of Kaliningrad being excavated, renovated and then covered, the group said in a report.

“The latest upgrade obviously raises questions about what the operational status of the site is,” wrote Hans M. Kristensen, director of the nuclear information project at FAS.

Kaliningrad borders Lithuania to the north, Poland to the south and the Baltic Sea to the west. The pictures used for the analysis came from Digital Globe and TerraServer, two commercial providers of satellite images.

It isn’t clear whether the bunkers are currently storing nuclear warheads or that they will in the future. The site could potentially function as a forward storage center for warheads, the FAS report said.

“The features of the site suggest it could potentially serve Russian Air Force or Navy dual-capable forces. But it could also be a joint site, potentially servicing nuclear warheads for both Air Force, Navy, Army, air-defense, and coastal defense forces in the region,” the report said.

Moscow has steadily boosted its military capabilities in Kaliningrad in recent years, including sophisticated air defense and missile systems. In addition, Russian nuclear-capable submarines and strike aircraft are based in Kaliningrad.

“There are also ongoing upgrades to other weapons storage sites in the Kaliningrad region, but they do not appear to be nuclear,” FAS said.

Meanwhile, NATO has increased its own presence in the area. A multinational battle group, led by soldiers from the U.S. Army’s 2nd Cavalry Regiment, is stationed in Poland, not far from the country’s border with Kaliningrad. The unit is part of NATO’s Enhanced Forward Presence, which is intended to deter potential Russian aggression.

Last week, the U.S. Senate approved a measure to require the Pentagon to assess the need for permanently stationing U.S. forces in Poland to counter Russia’s more assertive military posture. That move came several weeks after Warsaw said it was seeking such a permanent presence.

Russia has lashed out at NATO’s buildup in Poland and the Baltics and threatened countermeasures.