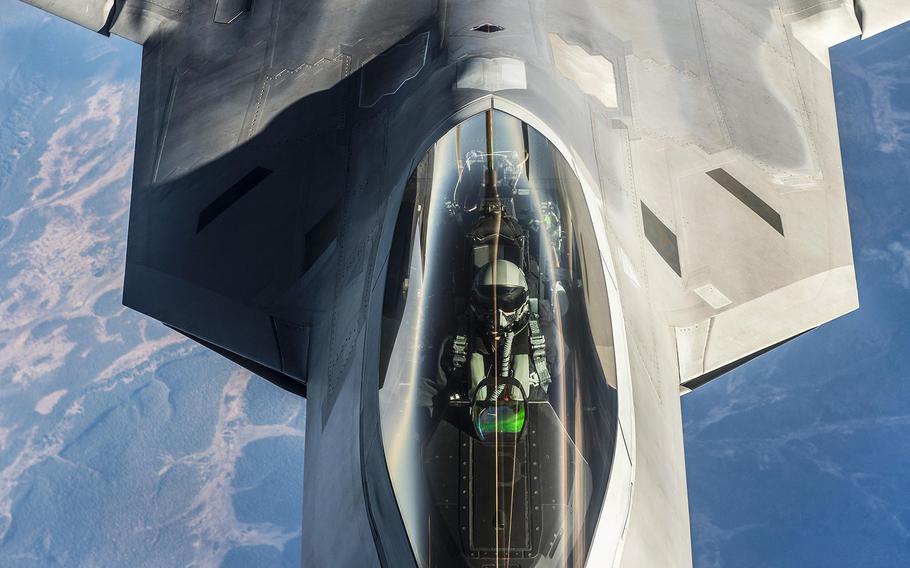 An Air Force F-22 Raptor receives fuel during a training exercise, in the high Arctic, on Oct. 18, 2016. The Pentagon said Thursday, May 4, 2017, that Raptor fighter jets intercepted a formation of Russian bombers and fighters in international airspace off the coast of Alaska on Wednesday. (Gregory Brook/U.S. Air Force )

The U.S. planes were launched to identify the twin Russian Tu-95 Bear bombers and two Su-35 Flanker fighters as they approached and entered the Alaskan Air Defense Identification Zone, an area about 200 miles off the Alaskan coast, said Army Maj. Jamie Davis, a Pentagon spokesman. The Air Defense Identification Zone is almost entirely within international airspace, but the United States expects aircraft to identify themselves to air traffic controllers and defense authorities when flying inside them.

The intercept occurred about 5 p.m. Alaska time. Davis said a Russian A-50 “Mainstay” Airborne Early Warning Aircraft later entered the Alaskan Air Defense Identification Zone but was not intercepted. It also did not enter U.S. airspace.

It was the first time the United States has observed the Su-35, an advanced fighter aircraft that entered the Russian arsenal in 2014, near Alaska, a defense official said on the condition of anonymity. Russian bombers have flown near Alaska on at least four occasions within the last month.

They were the first known flights of Russian warplanes near the U.S. coast since July 2015 when American fighter jets intercepted a Russian warplane in international airspace off the coast of California.

The defense official described the Wednesday interaction as safe and professional and said it should not be cause for alarm.

The official said the Russian flights were “fairly routine” and said the United States conducts similar flights in international airspace near Russia and other sovereign nations.

Tensions between the United States and Russia have been strained in recent years and appeared to intensify in the weeks after the U.S. missile attack April 6 on a Syrian air base in response to Syrian President Bashar Assad’s forces using chemical weapons against civilians. Russian planes and personnel were at Shayrat Air Base when the Tomahawk missiles were launched, but they were warned of the impending attack.

President Donald Trump said a week later that the United States was “not getting along with Russia at all.”

“We may be at an all-time low in terms of relationship with Russia,” Trump said April 12.

Trump spoke by phone to Russian President Vladimir Putin this week. In a readout, the White House described Tuesday’s conversation as “a very good one.”