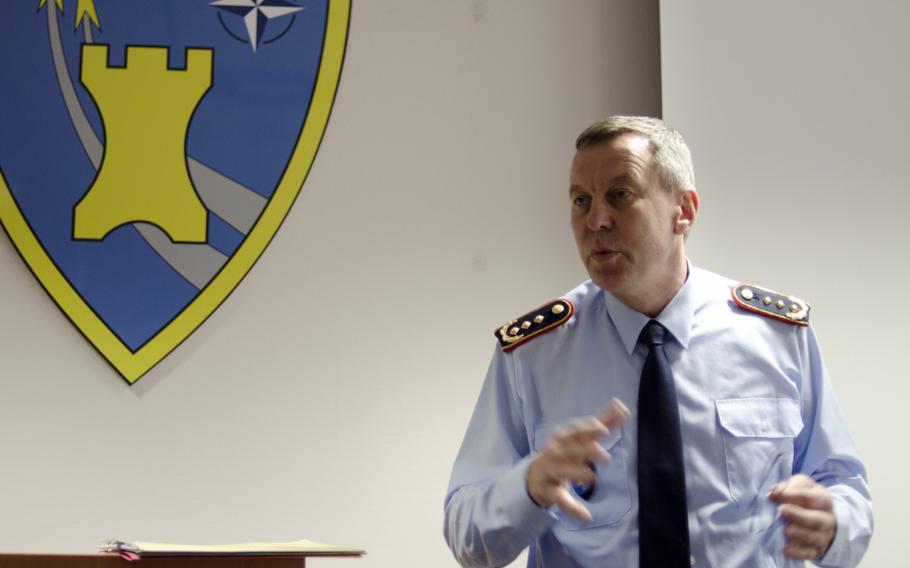 Buy Photo
An L-39 Albatros sits on display near a gate at Siauliai air base, Lithuania, on Tuesday, April 1, 2014. The base is host to NATO's Baltic Air Policing mission, and the U.S. currently provides F-15C Eagles and airmen for the mission. (Adam L. Mathis/Stars and Stripes) 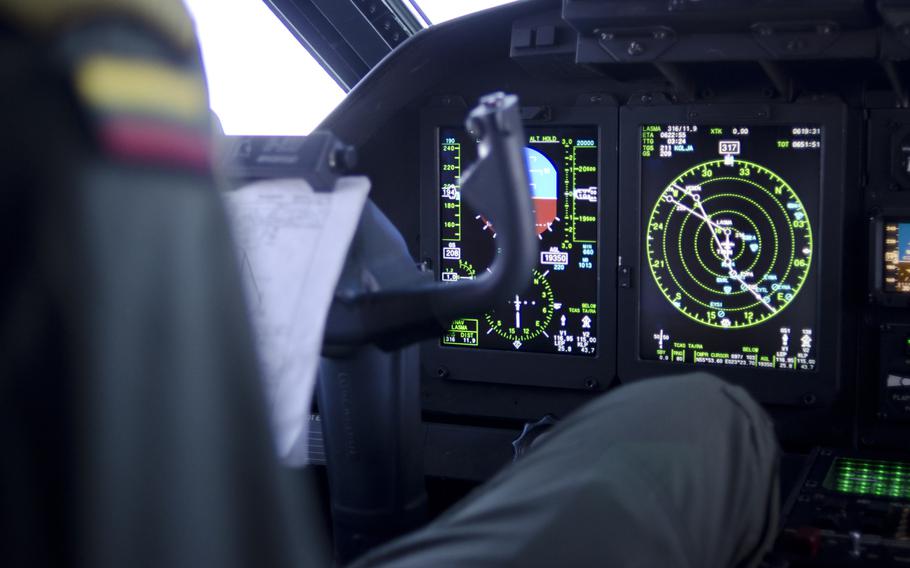 Buy Photo
A Lithuanian C-27 aircraft flies toward Sweden from Siauliai air base, Lithuania, to participate in a training event on Tuesday, April 1, 2014. The training gave fighter pilots a chance to practice intercepting a plane that ceased communicating with officials on the ground. (Adam L. Mathis/Stars and Stripes) 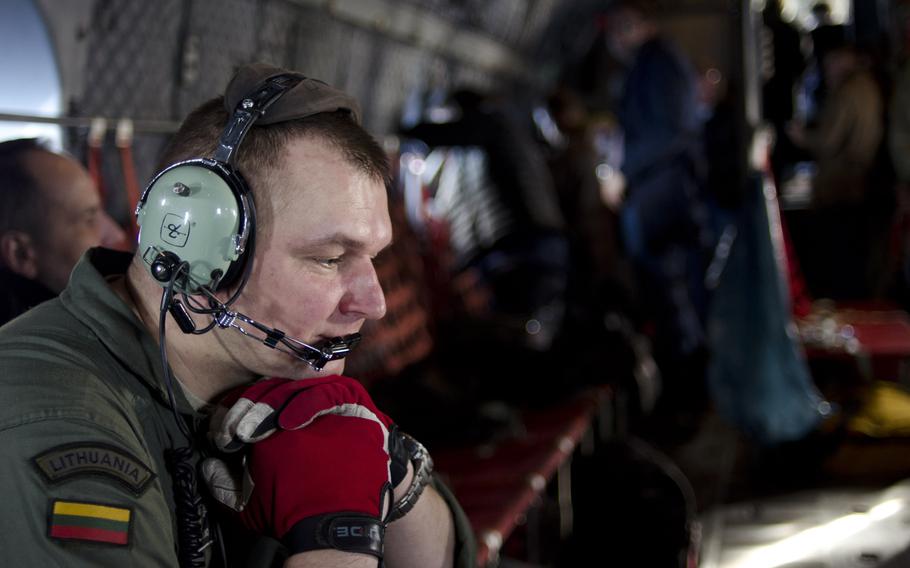 Buy Photo
A Lithuanian servicemember sits in the back of a C-27 flying toward Sweden as part of a training exercise with NATO on Tuesday, April 1, 2014. The training gave fighter pilots a chance to practice intercepting a plane that ceased communicating with officials on the ground. (Adam L. Mathis/Stars and Stripes) Buy Photo
An F-15C Eagle, foreground, stationed at Siauliai air base, Lithuania, and a Swedish JAS-39 Gripen Fighter fly next to a Lithuanian C-27 that is headed for a training event over the Baltic Sea on Tuesday, April 1, 2014. The C-27 was simulating a communications failure and the fighters intercepted the plane. (Adam L. Mathis/Stars and Stripes) Buy Photo
An F-15C Eagle lands at Siauliai air base, Lithuania, on Tuesday, April 1, 2014. Fighters from the base escorted a plane simulating a communications blackout from the Baltic Sea as part of a training event with NATO and Sweden. (Adam L. Mathis/Stars and Stripes)

SIAULIAI, Lithuania — What NATO considers normal Russian military activity over the Baltic airspace has heightened the security concerns of the Baltic states in the wake of Moscow’s recent annexation of the Crimean peninsula in Ukraine.

A routine military exercise involving Baltic air forces earlier this week took on greater significance because of the Ukraine crisis.

On Thursday, Estonian Prime Minister Taavi Roivas called for NATO to deploy “boots on the ground” to the region in order to improve deterrence and the collective defense of the region.

“I think it’s very important that the alliance has decided … to increase NATO presence and defend all allies,” Roivas said in Brussels after meeting NATO officials. “We’ll go to specific details in a later phase but I personally believe boots on the ground is a clear presence indicator.”

Speaking at the 17th Baltic Region Training Event at Siauliai air base in Lithuania, Lithuanian Defense Minister Juozas Olekas said Tuesday he wanted more NATO troops to be stationed in the Baltic region.

He said his request was prompted by an increase in Russian military activity around the Baltic states and Russia’s actions in Ukraine.

Russia, Olekas said, has been engaged in “very active” movements along Lithuania’s western borders. NATO ground forces in the region and visits from NATO navies would counteract these movements and military exercises in Kaliningrad, a Russian territory separate from Russia proper that borders on the Baltic Sea, Lithuania and Poland.

The training event, usually held three times each year, offers an opportunity for NATO and other militaries to train their air forces. This year’s brought together NATO and Sweden, a nonmember whose government is also concerned about recent Russian foreign policy moves.

In response to the Ukraine crisis, the U.S. Air Force last month deployed six additional F-15C Eagle fighters to Siauliai along with KC-135 aerial refueling aircraft to reinforce the four F-15s already there as part of NATO’s regular Baltic air policing contingent. The program was set up 10 years ago to protect the airspace of alliance members Estonia, Latvia and Lithuania, which don’t have their own fighter aircraft. Britain, France, Germany and Denmark have proposed sending additional fighters because of the crisis.

Though NATO’s Combined Air Operations Center in Uedem, Germany, has detected increased Russian activity in the airspace over the Baltics, officials there have downplayed its significance. The center, which monitors the airspace for NATO nations in northern Europe, said they had scrambled NATO fighters to intercept planes in the Baltic region 46 times in 2012.

This number is not unusual, officials at the center said. Rather, it represents an increase in Russian activity since 2006 and a recovery of power lost after the Soviet Union’s collapse.

“It’s just Russia’s political aims writ large, and so we’re seeing post-Cold War, when Russian air activity really did take a real nose dive, we hardly saw any activity at all, we’re now back in more positive times for Russia in terms of their air force, and we’re seeing a slow increase in activity,” said Group Capt. Stephen Richards, director of the air operations center, during a press briefing at the center.

Lt. Gen. Joachim Wundrak, commander of the center, said that some Russian aircraft fly over international waters and do not file flight plans or send out transponder signals that can be monitored by civilian air traffic controllers. While this practice doesn’t violate international law, it is potentially dangerous for civil air traffic, so NATO jets will scramble and broadcast the position of the Russian aircraft to the civilian authorities.

“We would like to see (the Russians) more following international civil procedures, and that would make our life easier,” Wundrak said.

Lithuania takes a much more suspicious view of Russian aerial activity. Before NATO established the Baltic air policing mission in 2004, Olekas said, many Russian aircraft crossed the border, and NATO’s presence is what currently deters them from the area.

The air policing mission does more than just provide security for NATO states. It also helps train other countries in the region for possible air encounters. On Tuesday a Lithuanian C-27 from Siauliai Air Base flew over the Baltic Sea and simulated a loss in communications with officials on the ground. The Swedish air force responded, sending two JAS-39 Gripen Fighters to practice intercepting the plane and communicating with the pilots through visual means.

Svenska Dagbladet reported in April last year that Russian aircraft in conducted simulated attacks on two areas of the country with military assets in March of last year. However, they did not leave international airspace.

Wundrak said as long as Russians fly in their own or international airspace, matters like the simulated attack on Sweden are matters of perception.

Asked about his own perception of the incident, Wundrak said: “I’m not here to perceive things, I’m here to follow my rules and to fulfill my mission. We are working to a clear, agreed set of rules, so for the time being I cannot see any really problematic action against NATO airspace.”