Russia: US tanks near border would prompt countermeasures 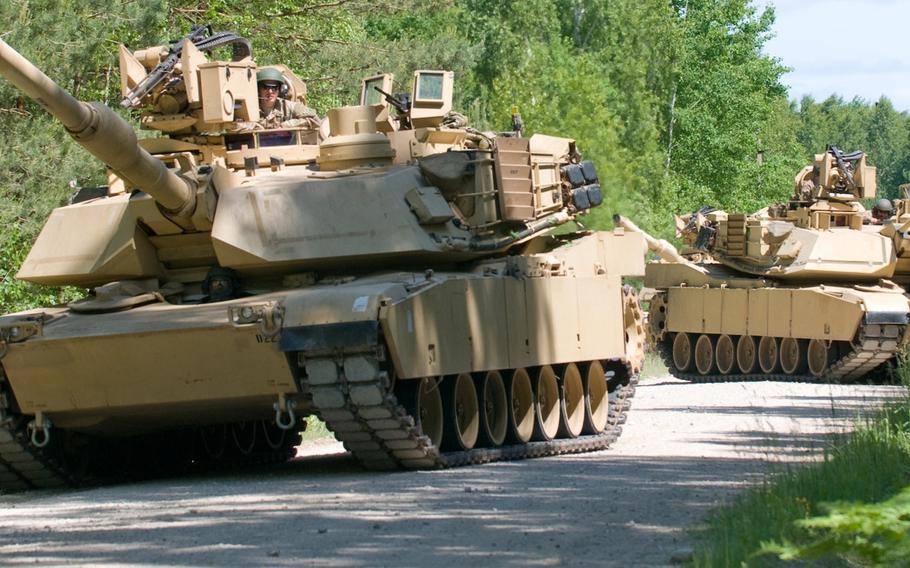 STUTTGART, Germany — Moscow is warning the U.S. that any decision to position tanks and other heavy equipment in eastern Europe to reassure allies nervous about Russia’s intentions, would be countered by an increased Russian military presence along its borders with NATO-aligned countries.

For several months, the U.S. military has been examining the pros and cons of positioning tanks and various heavy vehicles in countries along NATO’s eastern periphery, such as the Baltics and Poland, where U.S. troops have been a near-constant presence since Russian’s intervention in Ukraine more than a year ago. A decision has been expected soon, but Russia’s warning Monday appeared to be in response to a New York Times story over the weekend about the pending U.S. announcement.

“If U.S. heavy hardware, including tanks, artillery systems, or other fighting vehicles does appear in some Eastern European and Baltic countries, this would mark the Pentagon and NATO’s most aggressive step since the Cold War time of the past century,” Russian Army Gen. Yury Yakubov, a coordinator from the Russian Defense Ministry general inspectors directorate, told Interfax-AVN on Monday.

The Pentagon said it has yet to decide on positioning what it called training equipment.

“We are constantly assessing where best to position our equipment to make our ability to train more efficient,” Pentagon spokesman Col. Steve Warren said. “So the locations, they have been evolving.”

Warren acknowledged the U.S. is beefing up an existing equipment battalion into a brigade but denied it was a reaction to Russia’s intervention in the Ukraine.

“Everyone wants to link this to Russia but long before Russia ever had anything to do with Ukraine we had already had one battalion set prepositioned in Europe,” he said. “Since then, back in March we put a second battalion equipment set into eastern Europe.”

Additional battalions will likely come in the near future, Warren said.

Russian counter moves would involve the reinforcement of its entire western border with more tanks, artillery and air force units, including the rearming of a brigade in Kaliningrad — the Russian enclave nestled between Poland and Lithuania on the Baltic Sea — with a new tactical missile system, Yakubov said.

Earlier this year, U.S. Army Europe dispatched a survey team to eastern Europe to scout locations for tanks and other military hardware as part of a longer-term effort to increase the U.S. military presence in a region rattled by a more assertive Russia. Placing more gear east would ease the logistical strain on the Army, which must convoy military vehicles by road, boat and rail for its expanded series of training missions in the Baltics and other eastern European countries.

“We are doing surveys here in the next few weeks up in Estonia, Latvia, Lithuania, Poland, Romania and Bulgaria to see if there is a place where perhaps some of that equipment could be stored there,” USAREUR commander Lt. Gen. Ben Hodges told Stars and Stripes in January. “Maybe it’s a company, maybe it’s a whole battalion, we don’t know yet until we do the survey.”

At the time, Hodges said there was strong demand among allies for U.S. military hardware in the region.

“The big question for us right now is ‘where are they going to go?’” Hodges said. “We really want to put some in southeastern Europe, some in the Baltics, some in Poland.

“Those countries want them bad — an obvious reason, they’re a deterrent aspect,” he said.

On Sunday, the Polish Defense Ministry said Warsaw was discussing with the U.S. permanent placement of weapons.

EUCOM spokesman Capt. Greg Hicks on Saturday declined to characterize the nature of Breedlove’s recommendation, saying that the decision rests with Carter.

For the U.S., placing tanks across the Baltics and Poland would help achieve one of its goals, which is to reassure NATO partners in the east that the alliance stands united. However, those moves would likely need to be balanced against concerns that it might serve to escalate tensions with Russia, which are at their worst since the end of the Cold War.

The New York Times on Saturday, citing unnamed U.S. officials, reported that the U.S. was expected to approve a plan to position equipment in the east sometime ahead of next week’s NATO defense ministers conference in Brussels. The plan would ultimately require White House approval.