Russia seizes upper hand as US flounders in Syria 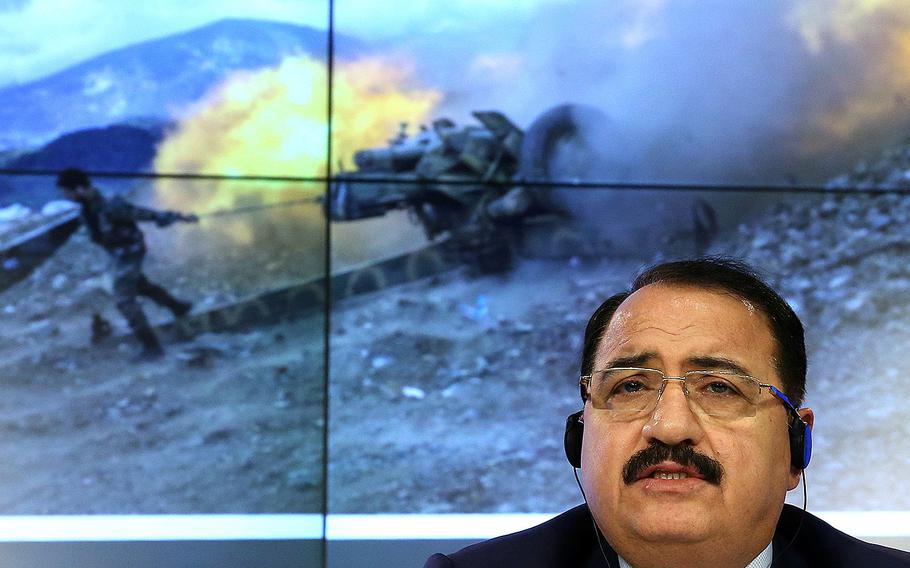 Syria's Ambassador to Russia Riyad Haddad looks on during a press conference in Moscow on Oct. 1, 2015. According to one former European Union ambassador to Syria, Russian forces "have mastered the game by very effective tactics and they are on the winning side.” (Sharifulin Valery/TASS/Zuma Press/TNS)

STUTTGART, Germany — Unity between air and ground forces and a clear objective have enabled the Russians to turn the tide of the Syrian civil war, reverse the fortunes of their longtime ally President Bashar Assad and leave the already muddled American strategy in Syria in tatters.

Rather than finding himself stuck in a Mideast quagmire, as was widely predicted in the West, Russian President Vladimir Putin has seized control of events and established himself — and not President Barack Obama — as the indispensable power broker in a crisis that has killed more than 250,000 people, displaced half the Syrian population and unleashed waves of refugees whose presence threatens to wreck the European Union.

“They have mastered the game by very effective tactics and they are on the winning side,” said Marc Pierini, a former European Union ambassador to Syria. “The best the West can hope for is a political arrangement dominated by the regime.”

And unlike the U.S., which failed at attempts to develop enough reliable local forces, Russia has been able to coordinate its air campaign with effective partners on the ground — the Syrian army and its Iranian allies.

Those tactical advantages are now on full display around Aleppo in northwestern Syria, whose fall to the regime could deliver a decisive blow to the five-year rebellion, carving out an expanding swath for Assad in Syria’s west.

Meanwhile, the U.S. efforts to train a Syrian opposition force have widely been deemed a disaster. The lone effective ground partner for the Americans have been Syrian Kurds, who now are taking advantage of Russia’s airstrikes around Aleppo to seize territory north of the city along Turkey’s border.

The U.S. support of the Kurds, is putting at risk the U.S’s 60-year alliance with Turkey, which views the Kurdish militia in Syria, the YPG, as its top enemy and fears that they could secure an enclave along the Turkish border and link up with the Kurds in southern Turkey, whom Ankara has been battling for months.

Turkey, whose Incirlik Air Base is key to a U.S. airstrike campaign against the Islamic State group in Iraq and Syria, has lashed out at Washington over the issue in a sign of conflicting priorities.

Now, German Chancellor Angela Merkel, under pressure to stem the flow of refugees pouring into Europe, has revived talk of instituting a no-fly zone over Syria, a move Washington has long been cool to.

Merkel, during a news conference Wednesday, said rather than establish such a safe zone by force, her plan would require the consent of the Assad regime, underscoring how little leverage the West possesses when dealing with Russia in Syria. Russia already has brushed the idea aside.

Short of a dramatic reversal in American policy — one willing to risk confrontation with Moscow — Western calls for a halt to hostilities in Syria amount to more wishful thinking than strategy, critics of U.S. policy say.

“I think we need to establish a no-fly zone to start to stabilize parts of Syria,” said Stephen Szabo, a security analyst with the Transatlantic Academy in Washington. “If it comes to a conflict with Russia through miscalculation, so be it.”

Merkel’s public flirting with the idea of a no-fly zone, a reversal from past statements, is part of a percolating focus on the idea of setting up safe havens for civilians in Syria.

In a Feb. 9 op-ed in the Washington Post, Syria observers Michael Ignatieff and Leon Wieseltier argued that failure to establish such a zone would make the U.S. complicit in war crimes given the toll on civilians in Aleppo.

“Operating under a NATO umbrella, the United States could use its naval and air assets in the region to establish a no-fly zone from Aleppo to the Turkish border and make clear that it would prevent the continued bombardment of civilians and refugees by any party, including the Russians.”

“If the Russians and Syrians sought to prevent humanitarian protection and resupply of the city, they would face the military consequences,” the authors said.

A series of safe zones backed by U.S.-led coalition fire power could force Putin to the negotiating table on less favorable terms, said Szabo, the security analyst. However, he said, the chances of the White House taking such action were remote.

“They (the Russians) know we have air superiority. He (Putin) will push as far as he can until he gets push back,” Szabo said.

The question is whether the strategic stakes for the U.S. in Syria are high enough to test Putin’s resolve.

“A no-fly zone is a very difficult bet,” said Pierini, a security analyst at the Carnegie Europe think tank in Brussels. “This was a good idea the day before yesterday. Doing it in 2012 would have meant something. Now, with this massive and highly capable Russian presence, it is a very dangerous situation.”

Despite a deal negotiated last week in Munich between the West and Russia for a cessation of hostilities, international observers say Russian airstrikes continue in force.

For years, the U.S. has largely stood on the sidelines as the civil war steadily intensified in Syria, focusing its energy on the campaign against the Islamic State group in Iraq and arguing that fighting in Syria could only be ended through political dialogue. Early on, long before the Russian military campaign, the White House resisted calls to arm rebel forces in Syria. While the policy of the administration was that “Assad must go,” the White House was skeptical about whether a credible opposition force existed that was worth arming.

Critics from all sides, such as Republican hawk Sen. John McCain and former Secretary of State Hillary Clinton, who is now running for president, have argued that a more robust plan to support a secular Syrian opposition would have made a difference. Obama also rejected calls to establish a no-fly zone over Syria, which would have prevented regime fighter planes from carrying out strikes on rebel and civilian positions in Syria, but also immersed the U.S. in a messy civil war.

The debate over a no-fly zone now comes as the Assad regime’s siege on Aleppo sends thousands more civilians to Syria’s border with Turkey, an upheaval that could eventually result in another tide of Europe-bound refugees.

And it further complicates the U.S. relationship with its NATO ally Turkey and its nominal allies on the ground in Syria, the Kurds.

For Russia, there are no such complications, and in recent months its willingness to align with those willing to hammer anti-Assad forces, has brought about an alliance between Russia and the Kurds, who view Washington as an unreliable partner.

“The intentions of Russia are very clear and very transparent,” said Pierini. “Now we have alliances and allegiances shifting for good and bad reasons. Syrian Kurds fighting in support of the U.S. and Russia to the great despair of the Turks. It could all get a lot worse.”

One concern is Turkey, anxious about Syrian Kurds carving out territory near its border, could launch a ground offensive that would bring it into direct conflict with Russia. That could prompt Turkey to appeal to the U.S.-led NATO alliance for support. However, the U.S. has warned Turkey against sending in forces, and Ankara appears reluctant to step inside Syria for direct confrontation without U.S. backing. But it has been shelling Kurdish positions for several days and demanded they withdraw from territory near the border.

“Turkey’s original objectives in Syria’s civil war — to extend its regional influence and ensure the swift removal of Bashar al-Assad — now seem a distant dream,” said the Soufan Group, a New York-based security firm, in an analysis of the latest developments. “Far from emerging triumphant from the current mess in the Middle East, Turkey appears to be the region’s biggest loser.”