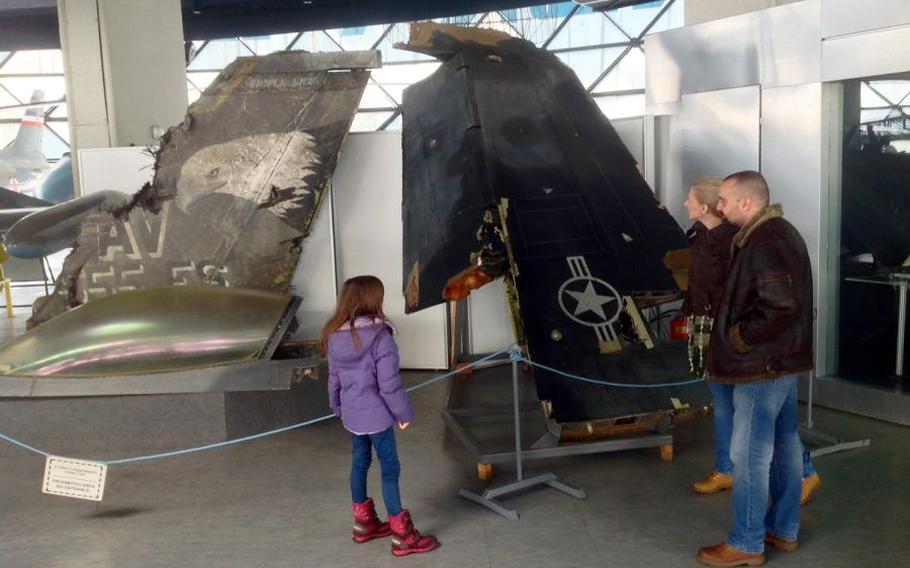 Buy Photo
Visitors at Belgrade's air force museum view the wreckage of an F-117 stealth attack jet downed during the U.S.-led NATO bombing campaign against Serbia in 1999. On the left is the tail and canopy of an F-16 piloted during that campaign by Gen. David Goldfein, the current Air Force Chief of Staff. (Slobodan Lekic/Stars and Stripes) 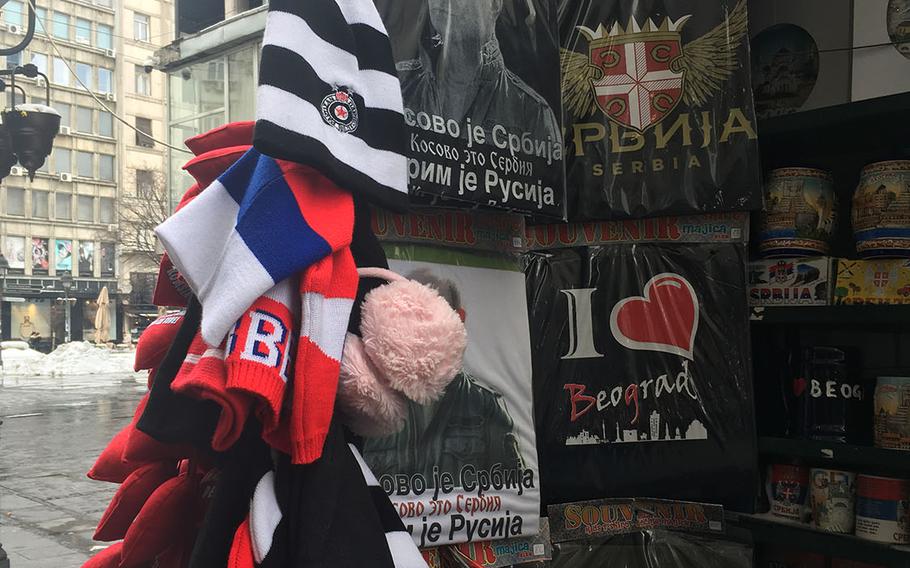 Buy Photo
Street vendors in downtown Belgrade sell T-shirts with the image of Russian President Vladimir Putin. Russian influence in the Balkan republic has been steadily growing in the past several years. (Slobodan Lekic/Stars and Stripes) Buy Photo
Street vendors in downtown Belgrade display t-shirts with the image of Russian President Vladimir Putin, with the logo: "Crimea is Russia, Kosovo is Serbia." Many Serbs blame the loss of Kosovo on the United States and NATO. (Slobodan Lekic/Stars and Stripes) 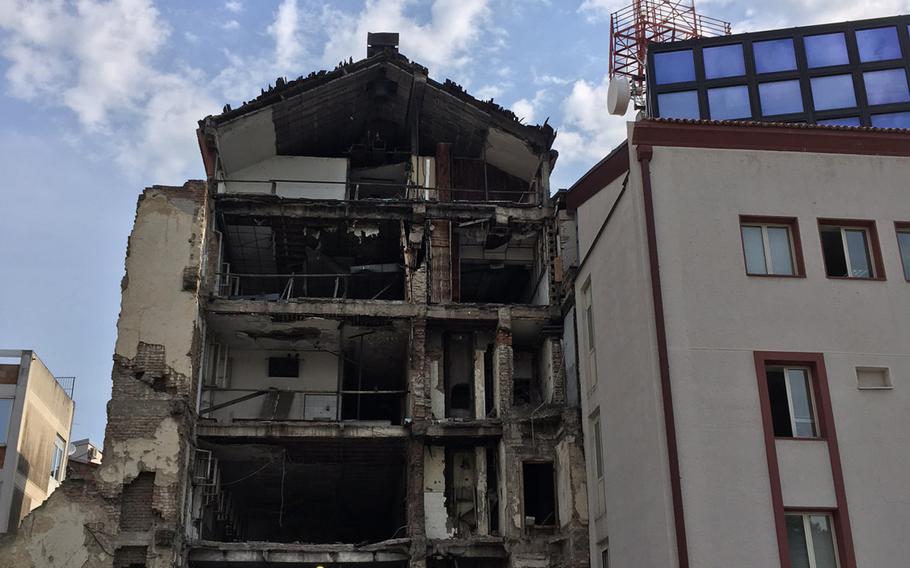 Buy Photo
A monument to the children killed during the NATO bombing of Serbia in 1999. Remembrance ceremonies are held regularly in front of the monument, located in a park in downtown Belgrade. (Slobodan Lekic/Stars and Stripes) 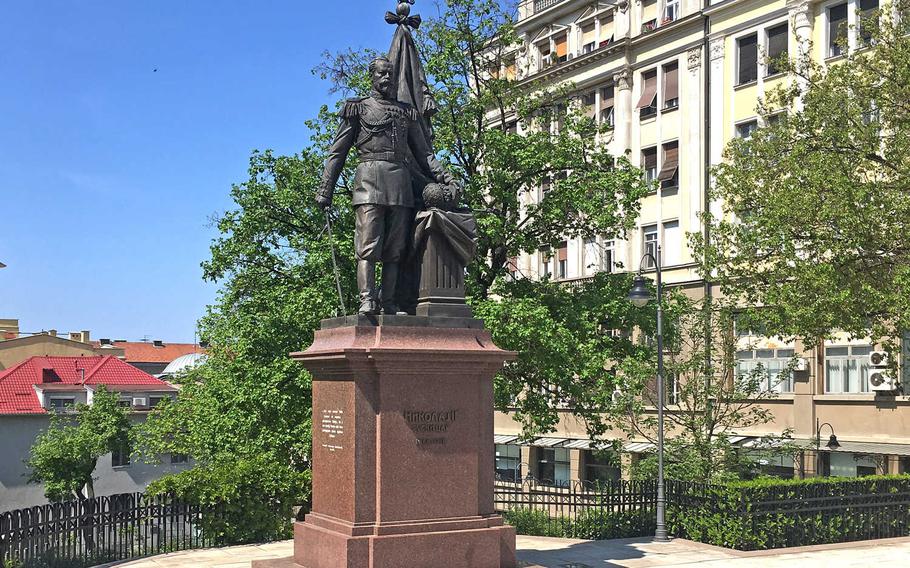 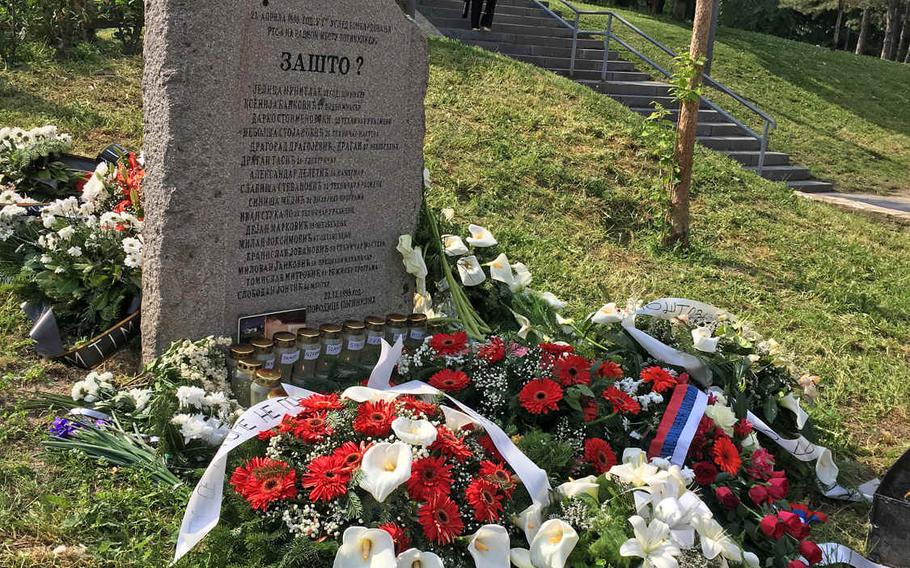 Buy Photo
Monument to the employees killed in NATO's bombing of Serbian state TV building during the 1999 Kosovo War. (Slobodan Lekic/Stars and Stripes)

BELGRADE, Serbia — When Serbia’s leader was recently confronted with an unexpected political flare-up in the breakaway province of Kosovo, he immediately rang Russian President Vladimir Putin to ask for support.

“Putin stressed that Serbia is the key partner of Russia in the Balkans (and) in Europe, and that the Russian Federation will support the Republic of Serbia,” President Aleksandar Vucic said.

The move was the latest example of the increasingly close ties between the two nations. These have raised concerns in Western capitals that Moscow is trying to turn Serbia — which borders five NATO nations — into its bridgehead in the Balkans, a region that has been relatively tranquil since the wars that marked the collapse of the former Yugoslav federation in the 1990s.

In March, U.S. European Command chief Gen. Curtis M. Scaparrotti identified Russia’s overt and covert “malign influence” in the region as one of his key concerns. “Russia is at work in the Balkans and we have kind of taken our eye off the area,” he said during Senate testimony.

“Russia is carrying out a campaign of destabilization to change the international order, fracture NATO, and undermine U.S. leadership around the world,” Scaparrotti added.

Many Serbian analysts who support the country’s stated policy of joining the European Union have also voiced concern that the country risks becoming a battleground between East and West.

Signs of Russia’s popularity are everywhere in downtown Belgrade. Dozens of vendors in the main pedestrian street peddle T-shirts emblazoned with Putin’s picture and Russian flags. Russian banks are ubiquitous and Russian-owned gas stations line the highways — although the European Union is by far Serbia’s largest trading partner. Russia has established a “humanitarian” center in the southern city of Nis, which some foreign diplomats believe could easily morph into an intelligence-gathering facility.

A massive new statue of Russia’s last czar, Nicholas II, has been erected on a square facing the presidential office.

After the ouster of former strongman President Slobodan Milosevic in 2000, Serbia sought to mend ties with the West and now wants to join the European Union. The U.S. and the West have conducted military training with Serbia and offered diplomatic and trade overtures. While those olive branches have been accepted, they haven’t gained the West much influence.

Much of the pro-Russian sentiment and bitterness toward the West stems from the U.S.-led NATO aerial onslaughts on Serbia and Serbs in Bosnia in the 1990s. In 1995, NATO bombed Bosnian Serb forces and in 1999 the alliance bombed Serbia for 78 days. It forced Serbia out of Kosovo, which declared independence in 2008 in a move Serbia refuses to recognize.

“It’s very simple why Serbs like Russia so much,” said Miroslav Lazanski, a military analyst who hosts a weekly program on the Kremlin-owned Sputnik radio network. “The United States and NATO bombed us, tore Kosovo away from Serbia, and now demand that we ‘love’ them. In contrast, Russia has supported Serbia and has stood by us over the Kosovo issue.”

“This is why the Russian and pro-Russian media is trusted by so many people here,” Lazanski said.

Tabloids laud Putin Serbian tabloids, by far the biggest source of print information in the country, run daily stories extolling Russian scientific and other achievements, the strength of the Russian military and Putin’s political prowess. These are then contrasted negatively to NATO’s “aggressiveness” and the EU’s internal problems. The content is often supplied by Russian outlets such as the Kremlin-owned Sputnik agency and republished for free by the Serbian media.

Among broadcast outlets, Pink TV and Happy TV — the country’s most popular television networks — offer a steady diet of talk shows featuring pro-Russian commentators and Serbian ultranationalists lauding Russia and disparaging the West. One of the regulars on such shows is Vojislav Seselj, a member of parliament and a convicted war criminal, who advocates setting up Russian military bases in Serbia.

A favorite topic in the tabloids and TV talk shows is the alleged cancer epidemic sweeping Serbia and causing tens of thousands of deaths — all supposedly caused by NATO’s use of depleted uranium munitions during the 1999 bombing campaign. Statements by the official medical authorities that the cancer rate has remained steady since the 1970s are dismissed out of hand.

Instead, pro-Russian “experts” claim that NATO warplanes intentionally sprayed Serbia with radioactive substances during the war to cause mass deaths.

“This narrative has been carefully cultivated over the years such that Russian government disinformation campaigns find very fertile ground among the population of Serbia,” said a recent Senate Foreign Relations Committee staff report.

Public opinion polls show that up to four-fifths of Serbs consider Russia as their natural ally and that many have a negative view of the West. This despite the fact that hundreds of thousands of Serbs live and work in Germany, Austria and other EU countries and that their remittances are a major part of the country’s gross domestic product.

Serbs and Russians have deep historic ties dating to Serbia’s fight for independence from the Ottoman Empire in the 19th century. Serbia’s dominant Orthodox church, which is closely linked to its Russian counterpart, continually stresses the religious and cultural ties between the two Slavic nations.

Kosovo remains Serbian priority Moscow also refuses to recognize Kosovo, where U.S. troops have been deployed in a peacekeeping role since 1999. Without Russia’s recognition, Kosovo cannot join the United Nations, and thus remains in international limbo a decade after independence.

“The West is only just now waking up to this fact the Kosovo issue plays a large role in Russia’s penetration of Serbia,” said Bosko Jaksic, an independent political analyst. “Putin is probably using this to set up an outpost here in order to show the West that Russia is a power to be reckoned with in the Balkans.”

Under Vucic, a former pro-Russian ultranationalist-turned-reformer, the government’s official strategic policy goal is to join the EU. EU officials say it is now a leading candidate to join the bloc in the next round of expansion in 2025.

Despite his pro-EU policies, Vucic regularly slams the West and particularly the United States for their stands toward Serbia over Kosovo and other issues. In contrast, he has never mentioned Russia in any negative context, Jaksic said.

Western diplomats have repeatedly called on Belgrade to gradually align its foreign policies with the EU — one of the key conditions for membership. But no movement in that direction has been registered in the last several years, said a senior diplomat who spoke on condition of anonymity.

Instead, pro-Russian ministers, such as Foreign Minister Ivica Dacic and Defense Minister Aleksandar Vulin, have been advocating even closer military, economic and political ties with Moscow. And some top officials have publicly stated that Serbia will never cut its ties to Russia even at the cost of not joining the EU.

In the past several months, Washington, the EU and NATO — which until now have been focused mainly on the Russian threat in the Baltics and Poland — have woken up to the threat of Moscow’s quiet infiltration into the Balkans, where it has already been stirring trouble in neighboring Montenegro, but also in Bosnia and Macedonia.

Montenegro became the 29th member of NATO last year, a step that was bitterly criticized by Russia. Montenegrin and Western officials believe that a coup attempt in 2016 that involved two Russian intelligence agents and several Serbian nationals was orchestrated by the Kremlin to destabilize the country ahead of its NATO accession.

Last year, Moscow presented Serbia with half a dozen old MiG-29 fighters to augment the four Serbian MiGs which survived the 1999 war. The “gift” — which included several dozen obsolescent, Soviet-era tanks and armored personnel vehicles — was trumpeted by the pro-Russian media and Kremlin-owned outlets as a major addition to Serbia’s security.

“What they naturally neglected was to point out is that the jets would have to be refurbished by Russian firms to make them airworthy, and that this would cost Serbia several hundred million dollars, a huge sum in one of Europe’s poorest countries,” Jaksic said.