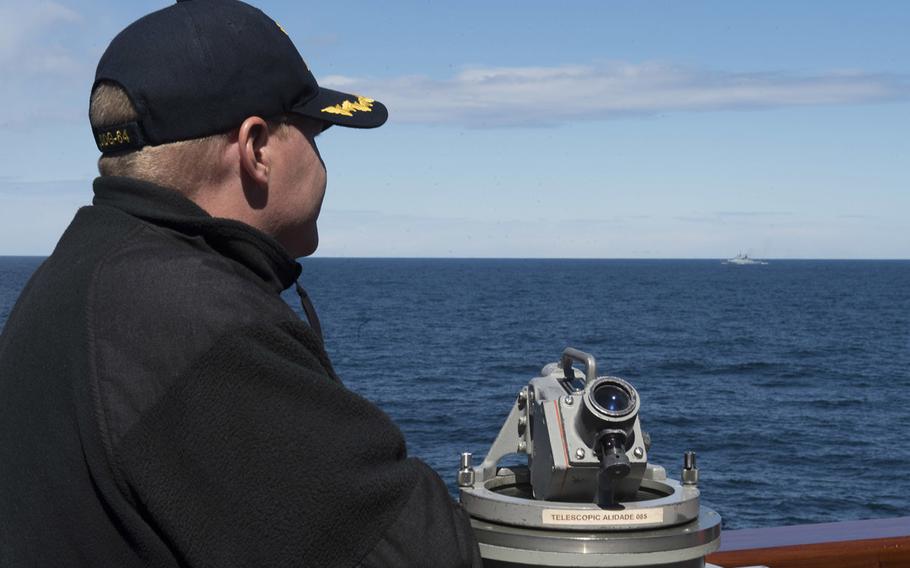 Cmdr. Peter Halvorsen, commanding officer of the guided-missile destroyer USS Carney, watches the Russian frigate RFN Boiky from the ship's bridge wing while on patrol in the Baltic Sea, May 9, 2017. (Weston Jones/U.S. Navy)

Russia is sending its largest naval task force into the eastern Mediterranean Sea since the country launched its military campaign in Syria three years ago, Russian media said Tuesday.

Izvestia, a major Russian newspaper, reported that the naval force includes 10 surface ships and two submarines, with more vessels on the way. Among the ships en route to the Mediterranean are the Black Sea Fleet’s frigates Admiral Grigorovich and Admiral Essen, armed with Kailbr long-range cruise missiles.

The deployment comes as Moscow accuses militants opposed to Syria’s President Bashar Assad of planning to stage a false flag chemical weapons attack against civilians. Russian defense officials say such an attack could be used as a pretext by the U.S. for launching its own strikes against the Syrian regime’s forces.

Russia has also accused the U.S. of building up its naval forces in the Mediterranean in preparation for retaliatory strikes, a charge the Pentagon has denied.

“What I can tell you is that Russian reports of a U.S. military buildup in the eastern Med are nothing more than propaganda,” Pentagon spokesman Eric Pahon told reporters Monday. “It’s not true. That does not mean, however, that we are unprepared to respond should the president direct such an action.”

In April, the U.S., U.K. and France bombed three government sites in Syria, targeting suspected chemical weapons facilities. The strikes were launched in connection with a chemical attack in the Syrian town of Douma that killed dozens of people.

At the time, both Damascus and Moscow denied that the attack had been carried out by regime forces and instead blamed rebels for faking it in a false flag operation.