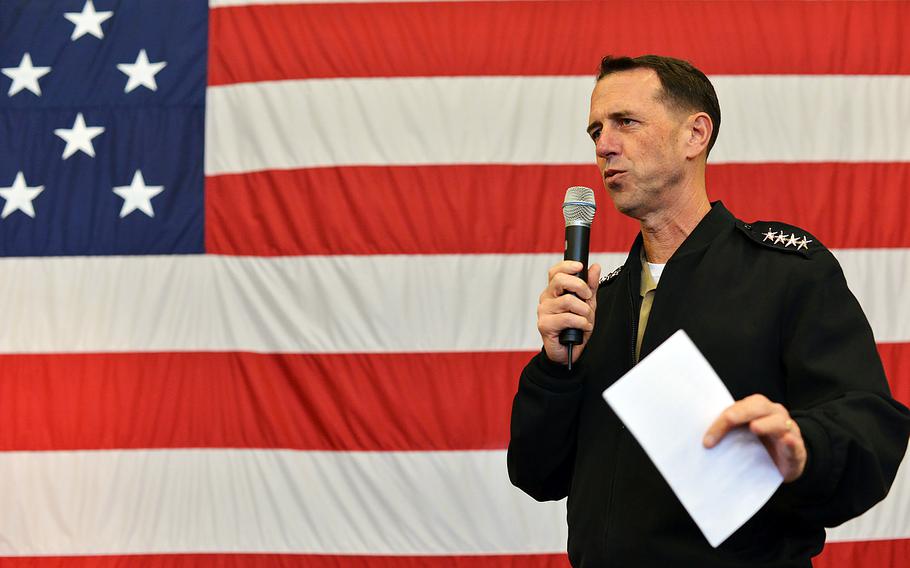 Chief of Naval Operations Adm. John Richardson speaks at U.S. 6th Fleet headquarters in Naples, Italy, on Oct. 20, 2015. Richardson told sailors and civilians not to expect significant changes to the amount of ships or resources arriving in the theater, despite an increasingly assertive Russian navy. (Steven Beardsley/Stars and Stripes)

Chief of Naval Operations Adm. John Richardson speaks at U.S. 6th Fleet headquarters in Naples, Italy, on Oct. 20, 2015. Richardson told sailors and civilians not to expect significant changes to the amount of ships or resources arriving in the theater, despite an increasingly assertive Russian navy. (Steven Beardsley/Stars and Stripes) 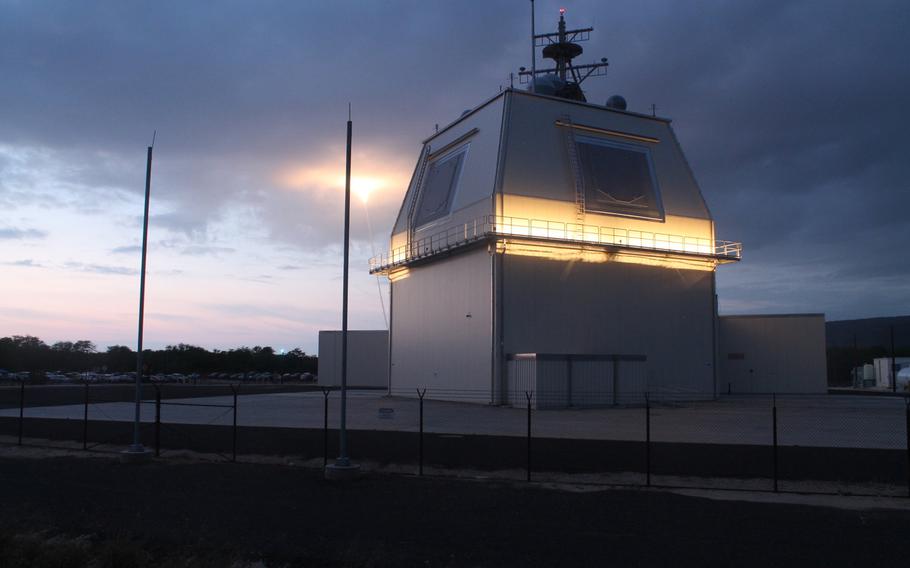 An SM-3 Block IB guided missile is launched during a test of the Aegis Ashore weapon system from Kauai, Hawaii, on May 20, 2014. The Missile Defense Agency turned over an identical Aegis Ashore system in Deveselu, Romania, to U.S. 6th Fleet on Dec. 18, 2015. (Defense Department) 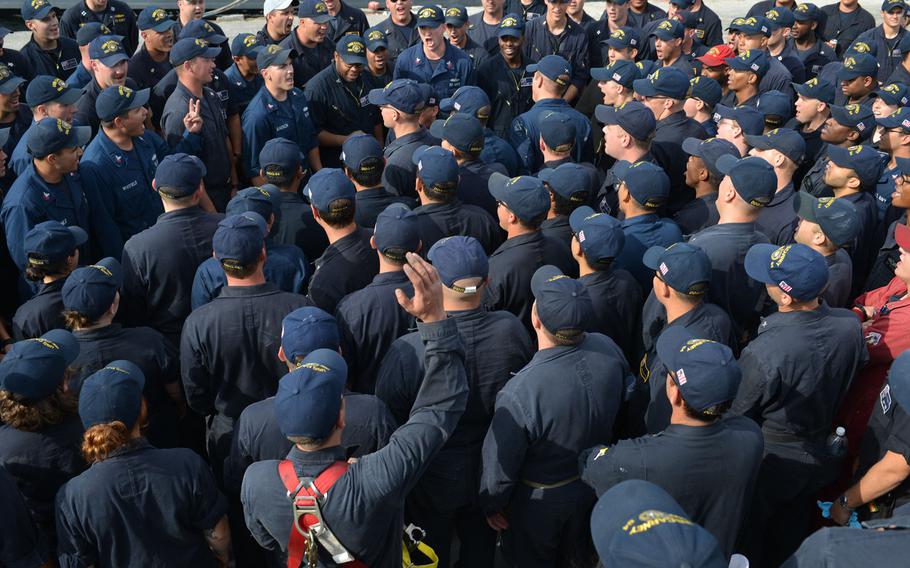 The crew of the guided-missile destroyer USS Carney gathers around the ship's commanding officer, Cmdr. Ken Pickard (obscured) for a cheer before boarding in Ponta Delgada, the Azores, on Sept. 22, 2015. The Carney would arrive at its new home port of Rota, Spain, three days later. (Steven Beardsley/Stars and Stripes) The guided-missile destroyer USS Carney is pictured at sea on Sept. 24, 2015, a day before its arrival in Rota, Spain. The ship was the last of four American warships to arrive in Rota as part of a ballistic missile defense shield. (U.S. Navy)

NAPLES, Italy — Concerns over Russia’s growing naval reach overshadowed a series of missile defense milestones for the U.S. Navy in Europe this past year.

The U.S. 6th Fleet welcomed the final two of four guided-missile destroyers to its base in Spain and took control of its new missile-interceptor system in Romania, both part of the elaborate ship- and shore-based shield designed to protect Europe from Iranian missiles. The fleet participated in the first ballistic-missile test in European waters and created a task force dedicated to missile defense. Yet unease over the growing Russian presence in European waters cast the region in a Cold War light, and raised questions about whether the Navy has what it needs in Europe.

“Would I want more ships? Of course,” 6th Fleet commander Vice Adm. James Foggo III said in a recent interview. “I’m a fleet commander, that’s what fleet commanders do — we take assets and we use them.

Over the course of this year, several countries reported suspected Russian submarines along their coasts, as well as harassment from Russian aircraft and surface ships in the Black and Baltic seas. Russia stationed the first two of a planned six new Kilo-class submarines in the Black Sea. Moscow also flexed its muscles with seaborne cruise-missile attacks against Syrian targets, one from a ship in the Caspian Sea and another from one of the Kilo-class subs while in the eastern Mediterranean.

Adm. Mark Ferguson, the Navy’s top commander in Europe, and Foggo’s boss, said Russian operations were reaching a level unseen in more than a decade — and designed to frustrate NATO.

“This is a sea denial strategy focused on NATO maritime forces,” he told the Atlantic Council in October. “Their intent is to have the ability to hold at risk maritime forces operating in these areas and thus deter NATO operations.”

The 6th Fleet has responded by deploying more ships eastward. It kept warships in the Baltic Sea for 116 days in 2015, and in the Black Sea for 123 days, largely by deploying the recently arrived destroyers in Rota, Spain. The fleet also took advantage of independent deployers from the U.S. such as the amphibious transport dock USS San Antonio and the destroyer USS Jason Dunham, both participants in the annual BaltOps exercise in the Baltic Sea.

Yet the fleet still sees little of the Navy’s largest ships, the aircraft carriers and amphibious warships capable of projecting air and ground forces. Both transit regularly through Europe on their way to the Middle East, a theater busy with airstrikes against the Islamic State group and monitoring both the Persian Gulf and Saudi airstrikes in Yemen.

The trade-offs are too great to keep a carrier in Europe long term, new Chief of Naval Operations John Richardson told an audience in Naples in October. With growing needs in Asia and the Middle East, and the recent carrier maintenance backlog, resources remain tight, he said.

That hasn’t stopped commanders from asking. U.S. European Command boss Gen. Philip Breedlove told reporters during an October visit to Washington that he was lobbying for more ships to counter the Russian navy.

“Europe isn’t what it was 19 months ago or even six months ago,” Breedlove said.

In Naples, Foggo said he has the forces he needs for current operations—“phase zero”— and believes he could get more if the situation changes.

“If there were an increase in tensions, then Adm. Ferguson, Gen. Breedlove and myself, Gen. [David] Rodriguez [head of U.S. Africa Command], would be the first ones to call to put in a request for forces,” Foggo said. “And I am confident we would get those forces.”

That request might not be prompted by Russia, however. Events across the region are drawing U.S. attention, from the spread of militant groups across North Africa to the flow of migrants across the Mediterranean and the deteriorating situations in Syria and Libya. Even a noncombatant evacuation tied to nearby fighting — similar to the one conducted by the Marines in Lebanon in 2006 — would be a major undertaking.

“There’s a lot going on in this theater,” Foggo said.