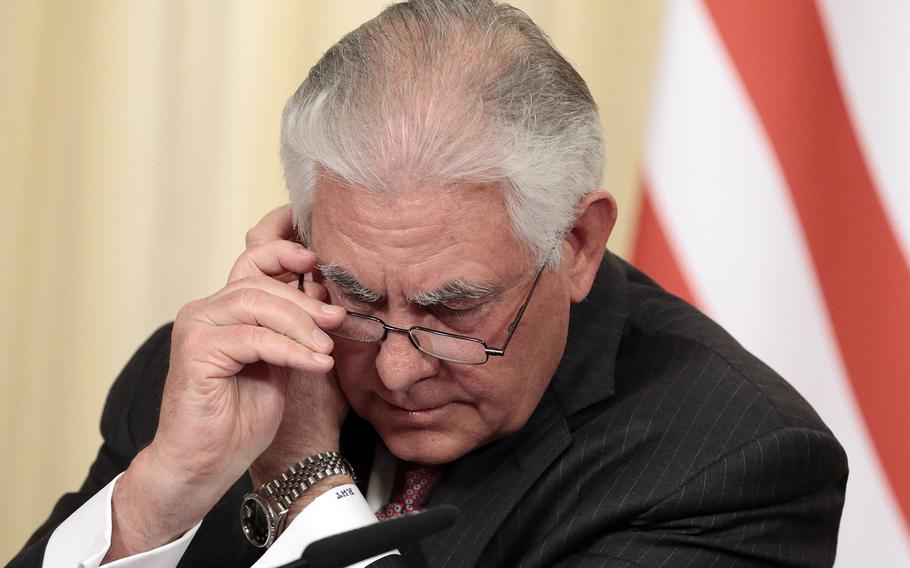 WASHINGTON — Russia’s top foreign minister said Wednesday that his country will consider reopening a phone line with the United States used to avoid aircraft collisions over Syria only if the U.S. agrees to stop attacking Syrian government targets.

One day after U.S. cruise missiles destroyed Syrian jets, fuel and radars at the Sharyat air base, Russia withdrew from the so-called “deconfliction line,” which is a military-to-military daily phone call used since late 2015 to communicate the locations of U.S. and Russian air and ground forces in Syria.

The United States said it attacked the airfield based on information it attained that the forces of Syrian President Bashar Assad launched a Su-22 fighter jet on April 4 from that base armed with sarin gas. The jet dropped sarin on the western Syrian village of Khan Sheikhoun, killing at least 70 civilians.

In the days since the attacks, U.S.-Russian relations have worsened and the tension was acknowledged Wednesday by top diplomats of both countries, who met in Moscow to try and work through differences on a number of major foreign policy issues, including Ukraine and North Korea.

At Wednesday’s meeting between Russian Foreign Minister Sergey Lavrov and Secretary of State Rex Tillerson, Lavrov confirmed the phone line had been suspended. But he also said Russian President Vladimir Putin was open to re-establishing it.

“Today the Russian president has reaffirmed that we are willing to put it back into force on condition,” Lavrov said.

“We assume as well that the publically stated position of both Russia and the U.S. on having no intention to interfere in the domestic affairs of Syria or any other state are still in force,” Lavrov said.

Defense Secretary Jim Mattis said Tuesday that the United States is not trying to get involved in Syria’s civil war, but the U.S. would hit Syrian government targets again if Assad used chemical weapons again.

“If they [Syria] use chemical weapons, they are going to pay a very, very stiff price,” he said.

The decision by the United States to strike Assad’s air base broke with its stated mission under Operation Inherent Resolve that U.S. and coalition forces are only in Syria to defeat the Islamic State there.

Mattis said Tuesday that Assad’s use of the sarin crossed a line for the United States, though Assad’s forces have killed thousands of Syrian civilians trapped by the country’s violent civil war since 2011.

“When you look at what happened with this chemical attack, we knew that we could not stand passive on this,” he said.

White House officials have suggested Russia likely knew about the attack in advance, and might have helped cover it up,

Air Force Col. John Dorrian, the Baghdad-based spokesman for Operation Inherent Resolve, said Wednesday that the Pentagon would no longer discuss the deconfliction line because it has become political.