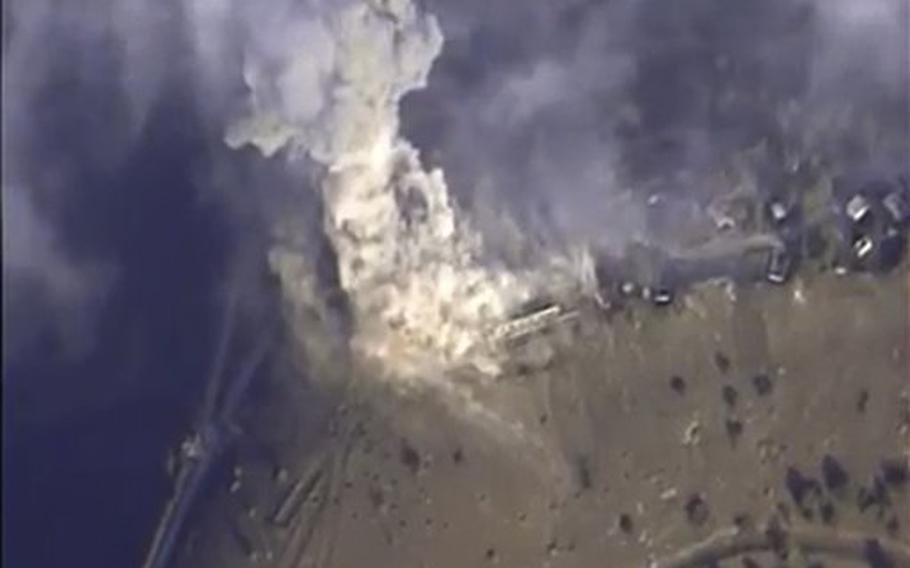 This file photo made from the footage taken from Russian Defense Ministry official web site on Monday, Nov. 2, 2015 shows a target hit during s Russian air raid in Syria. The tide of global rage against the Islamic State group lends greater urgency to ending the jihadis’ ability to operate at will from a base in war-torn Syria. That momentum could also force a reevaluation of what to do about President Bashar Assad’s future and puts a renewed focus on the position of his key patrons, Russia and Iran. (Russian Defense Ministry Press Service)

WASHINGTON – Russia launched a third massive wave of bomber and cruise missile attacks in Syria on Thursday in the largest show of its airpower since the 1980s, though some defense analysts questioned the tactics and purpose behind the Russian campaign against Islamic State militants.

The airstrikes on Thursday included Tu-95MS "Bear" long-range bombers that flew from Russia to Syria, firing 12 cruise missiles at targets in the cities of Aleppo and Idlib and an attack by 12 Tu-22M3 “Backfire” bombers against oil and ammunition depots, according to a Russian defense ministry statement.

Some analysts have called the Russian airstrikes its largest air bombing campaign since the former Soviet Union’s air and ground war against the foreign-backed Mujahedeen fighters, which lasted from 1979 to 1989.

“This is the biggest since Afghanistan,” Brookings Institution senior defense fellow Steven Pifer said Wednesday, referring to the Soviet-Afghan War.

Russia started to intensify its air bombing of Islamic State targets early Tuesday, after Russian President Vladimir Putin announced they had determined it was a bomb that brought down Metrojet 9268. The commercial airliner crashed after takeoff from the Egyptian resort Sharm el-Sheik on Oct. 31, killing 224 people. On Tuesday, Putin offered a $50 million reward for information about the bombing and promised an intensified air campaign in retribution.

Until this week, Russian airstrikes largely have targeted Syrian rebels in their efforts to back the regime of Syrian President Bashar Assad. It was not until the Islamic State group claimed responsibility for the terror attacks in Paris last Friday that killed at least 129 people, and France’s immediate response with its own intensified air bombing of Islamic State targets in Syria, that Russia quickly followed suit and retaliated for last month’s downing of the jet.

“In the aftermath of the Paris attacks – Putin saw some opportunity for propaganda strikes so that is what he did,” said retired Navy Cmdr. Chris Harmer, a senior analyst with the Institute for the Study of War. “This is purely window dressing for the Russians – their number one priority is preserving the Assad regime.”

Russia has maintained a fleet of fighter aircraft at a base in Latakia, Syria, for months, and conducted daily airstrikes in Syria from that base. But the injection of long-range bombers is new.

“We don’t even use those type of tactics anymore,” he said. “The idea of putting, you know, ten ships in the air at one time, or 12 or even more, is very old fashioned. And those are the type of tactics needed only if you don’t possess the technology, the skills and the capabilities to conduct the type of precision strikes that our coalition conducts.”

“These were multi-ship formations and it was cruise missiles fired, frankly, over the Iraqi airspace,” he said. “This is stuff that we hadn’t seen before. The Russians have not bombed Raqqa. You know, historically, it’s been coalition planes bombing Raqqa.”

Pifer said Russia’s active bomber fleet is roughly 100 aircraft, smaller than the U.S. bomber fleet of about 160 aircraft. He also said it was not necessary for Russia to use cruise missiles since Syria does not have air defenses needed to stand-off an attack.

“They were doing a demonstration,” Pifer said of the Russian airstrikes, noting the use of its air-launched and sea-launched missiles was more of a display and not strategic.

The Russian defense ministry said it notified the United States that it was launching the airstrikes, a condition the U.S. and Russia agreed to last month in order to protect their pilots from potential collisions or misunderstandings in the skies over Syria.

Warren said Americans and Russians talk daily on a “hotline” that they have established for notification or emergency situations. Since Tuesday, the line has been used at least twice by Russia to announce it is launching another attack, according to U.S. officials.

“The Russians are using dumb bombs. Their history has been both reckless and irresponsible,” he said. “So, [we are] uncertain on the civilian casualty piece at this point. We are, of course, continuing to monitor it closely.”