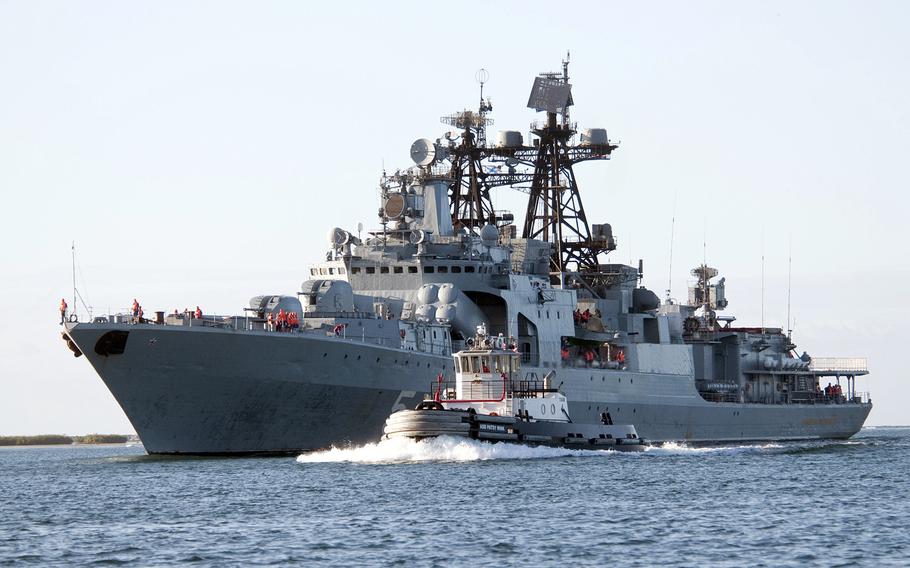 The Russian Navy Udaloy-class destroyer RFS Admiral Panteleyev arrives at Joint Base Pearl Harbor-Hickam to participate in the Rim of the Pacific exercise in June 2012. A December 2015 report released by the U.S. Navy outlines Russia's naval capabilities. (U.S. Navy)

STUTTGART, Germany — Russia’s recent demonstrations of its naval capability have stunned military observers and drawn scrutiny from the U.S. Navy, which has issued its first report in more than two decades on the status and future of Russia’s navy.

In October, Russian warships launched a cruise missile from the Caspian Sea, hitting targets more than 1,000 miles away in Syria. And, this month, a Russian diesel-electric submarine flexed its muscle in the Mediterranean, launching a missile strike against militants in Syria.

“Because the U.S. Navy operates worldwide and the Russian Navy is an advanced, globally capable force, its history, capabilities, missions, and role within the Russian state and armed forces should be clearly understood,” the Navy’s Office of Naval Intelligence said in a December report, titled, The Russian Navy: A Historic Transition.

It is the first such unclassified analysis to be released since 1991, the year that marked the end of the Cold War and the apparent need for monographs on the state of Russian seapower.

With Moscow’s military intervention in Ukraine last year, and the growing presence of the Russian military in Syria and the Mediterranean, the security environment in Europe has again become more complicated.

For Russia, remaking its Navy has been the centerpiece of an overall effort to transform its armed forces, which have undergone significant reform during the past decade.

“As Russia asserts itself on the world stage, it is giving priority of effort and funding to recapitalizing its navy, which is going through a major transition from the legacy Soviet Navy to a Russian Navy that should reflect the latest achievements of Russian advances in science and technology,” the U.S. Navy report states.

Moscow has put in place a large shipbuilding program that will result in “a new 21st-century Russian Navy.”

The sea force will involve multipurpose submarines and surface ships capable of conducting aerospace defense, anti-ship and anti-submarine warfare unlike their Soviet-era predecessors, which tended to focus on single missions, the report states.

“Russia has begun, and over the next decade will make large strides in fielding a 21st-century navy capable of a dependable national defense, an impressive but limited presence in more distant global areas of interest, manned by a new generation of post-Soviet officers and enlisted personnel,” the report states.

The future 21st-century Russian navy is not expected to grow significantly, but is “projected to be more capable on a unit-by-unit basis.”

Building programs are underway to refurbish the aging fleet with more advanced submarines and warships, however, there are numerous delays associated with various projects.

A combination of economic sanctions and plummeting oil prices have damaged the Russian economy, raising questions about the Moscow’s ability to carry out all of its ambitious military plans.

The report says the age of the fleet “clearly shows that the Russian Navy faces the imperative of new construction in order to avoid disappearing in the 2020 timeframe.”

Meanwhile, the Russian navy also is investing more in experimental weapons systems, such as lasers and rail guns, which rely on electrical energy.

Taken together, “the Russian navy once again stands at a point of transition and renewal, as it has at various times in the preceding centuries of its history,” the U.S. Navy report states.