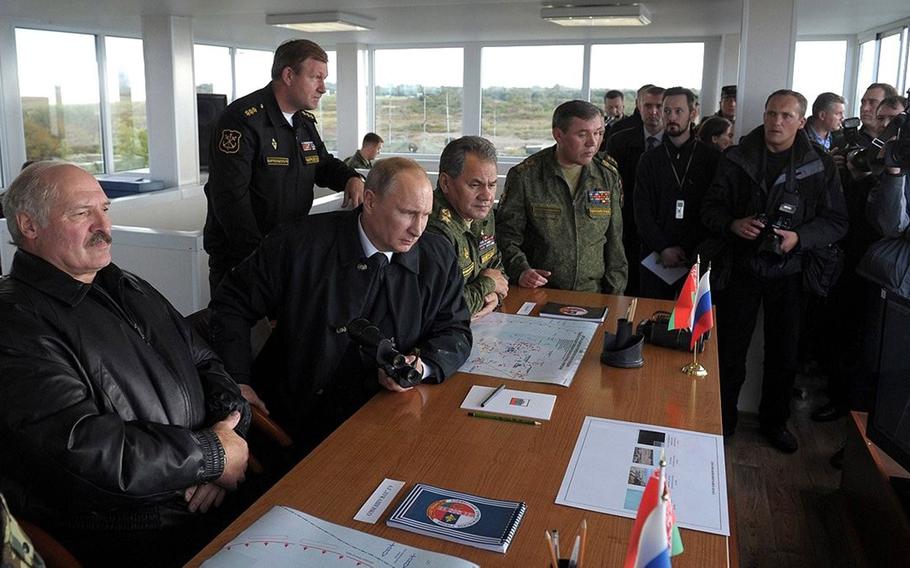 Perhaps no Russian exercise in recent years has caused as much consternation as Zapad, which means “west” and involves thousands of troops operating in the vicinity of NATO’s borders. As the drills began, Moscow said the exercises are purely defense, invoking the parlance used by Western militaries when talking about their own war games.

The main goals of Zapad are to “improve interoperability among the military staff” as they mobilize to manage forces in a conflict, Russia’s Defense Ministry said.

“Heads of military administrative bodies and commanders of units involved in the drills have received instructions from the General Staff ... concerning their training tasks,” the statement said, as quoted by Russian media.

Russia says its exercise with Belarus will involve 12,700 troops, 250 tanks, 70 aircraft, 10 warships and various missile-launching systems. Live fire drills involving warplanes and ground units will be carried out at several training ranges in both countries.

NATO allies, however, have accused Russia of not being fully transparent about the details of Zapad and have speculated that the number of troops involved could be closer to 100,000, citing past versions of Zapad that were larger than anticipated.

At Russia’s invitation, NATO is sending three experts to monitor a small portion of the exercise, but allies say that invitation falls short of full transparency as laid out by international regulations known as the Vienna document, which allows for briefings on exercise scenarios, overflights and opportunities to talk with individual soldiers.

“So we call on Russia to observe the letter and the spirit of the Vienna Document,” NATO Secretary-General Jens Stoltenberg said in Estonia last week. “Transparency and predictability are even more important when tensions run high, to reduce the risks of misunderstandings and incidents.”

For Russia, Zapad has traditionally been a venue for testing its latest capabilities and tactics. Western critics claim past drills have served as preludes and testing grounds for real world operations in places such as Georgia and Ukraine.

However, Russia has repeatedly dismissed accusations that the drill will serve as a rehearsal for mischief inside NATO territory. On Wednesday, Russian deputy defense minister, Alexander Fomin, said Russia’s neighbors in the Baltics have no cause for panic.

For its part, the U.S. and its allies have boosted force levels around the Baltics and Poland in the past year in an effort to reinforce defenses in the region.