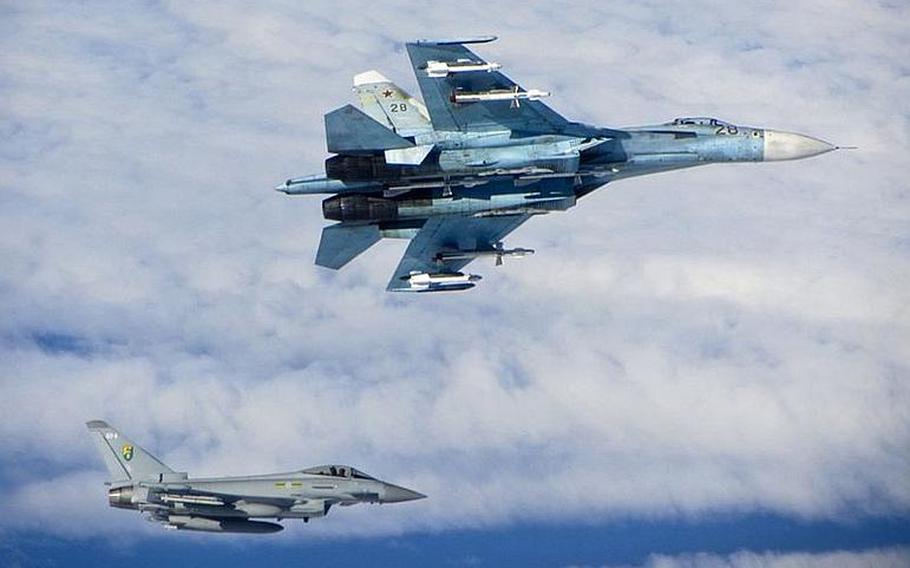 A British Typhoon (bottom) escorting a Russian Su-27 fighter when the jets were scrambled to intercept several Russian planes in June as part of NATO's ongoing mission to police Baltic airspace. The Russian aircraft all appeared to be taking part in routine training. (British Ministry of Defense)

Thousands of Russian troops are back near the Ukrainian border marking an escalation in tensions only weeks after Moscow began pulling back troops from the area, NATO’s top official said on Thursday.

“I can confirm that we now see a new Russian military buildup — at least a few thousand more Russian troops deployed to the Ukrainian border, and we see troop maneuvers in the neighborhood of Ukraine,” NATO Secretary General Anders Fogh Rasmussen said during a visit at the London-based Chatham House think tank.

The return of troops to the border again raises the specter of further Russian intervention in Ukraine which in turn would prompt an international response, according to Rasmussen,

“I consider this a very regrettable step backwards and it seems that Russia keeps the option to intervene further,” said Rasmussen, as quoted by the Associated Press. “So the international community would have to respond firmly if Russia were to intervene further. That would imply deeper sanctions which would have a negative impact on Russia.”

“ Indeed, since 2008, Russia has increased its defense spending by around 50 percent while, on average, NATO allies have decreased theirs by about 20 percent,” Rasmussen said. “This gap needs to be addressed.”

“If we Europeans want the United States to remain committed to European security, we must show a commitment to pick up our part of the bill,” Rasmussen said.

Despite the increases in Russia’s defense spending, its total remains far below the level of NATO’s 28 member states. According to statistics compiled by Stockholm’s International Peace Research Institute, the combined defense expenditures of all NATO nations in 2013 amounted to $1.02 trillion, while Russia’s were $90 billion.

Meanwhile, British jets were scrambled Tuesday to intercept several Russian fighters flying near NATO airspace in the Baltics, where an ongoing alliance air policing mission has witnessed a spike in Russian activity in recent years.

The Russian jets were armed, failed to file a flight plan and turned off their transponders, making them a safety hazard and invisible to commercial air traffic control, according to a NATO official, who spoke under the usual conditions of anonymity.

“Over the last years we have seen an increase in Russian air activity close to our borders. We think this is because of increasing investment in defense,” the official said. “These Russian fighters and bombers were armed and were not cooperating with civilian air traffic control, which is why NATO intercepted them. I want to stress that at no time have Russian jets violated NATO airspace.”

Britain’s Defense Ministry said its Typhoons intercepted seven Russian aircraft, which appeared to be taking part in a training exercise.

Once airborne, the British jets identified the aircraft as a Tu-22 bomber, four Su-27 fighters, one Beriev A-50 early warning aircraft and an An-26 transport aircraft, the defense ministry reported.

“Since the start of the crisis in Ukraine we have seen a modest increase in Russian air activity close to NATO’s northern and eastern borders,” the NATO official said.

The U.S. military said no American jets were involved in the intercept.

“Our increase in exercises and deployments to Poland and the Baltic nations has been in response to their concerns about Russian military actions in the region,” the U.S. European Command said in a statement.

NATO air policing in Baltic airspace has been going on for more than 10 years. During that time, NATO aircraft have routinely identified and escorted Russian aircraft in its vicinity. Since the crisis in Ukraine, NATO has tripled the aircraft on alert as part of the alliance’s effort to reassure eastern members.