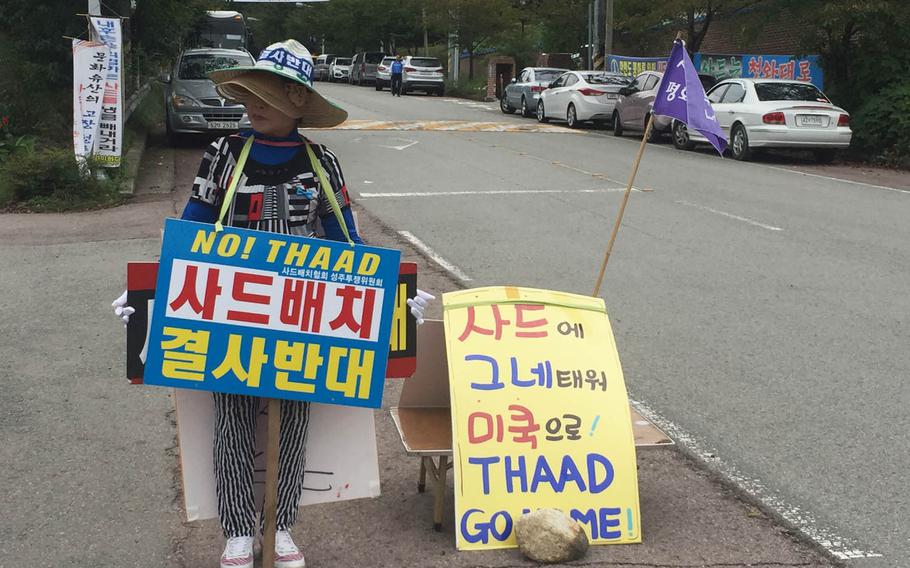 A South Korean woman is decked out in signs on Wednesday, Sept. 28, 2016, to protest U.S. and South Korean military plans to deploy an advanced U.S. missile defense system known as THAAD in the southeastern Seongju area. She is standing near the road leading to the Lotte Skyhill Country Club, which South Korean media have reported is being considered as an alternate site for the anti-missile battery. The Ministry of National Defense has not confirmed a specific location yet. (Kim Gamel/Stars and Stripes)

A South Korean woman is decked out in signs on Wednesday, Sept. 28, 2016, to protest U.S. and South Korean military plans to deploy an advanced U.S. missile defense system known as THAAD in the southeastern Seongju area. She is standing near the road leading to the Lotte Skyhill Country Club, which South Korean media have reported is being considered as an alternate site for the anti-missile battery. The Ministry of National Defense has not confirmed a specific location yet. (Kim Gamel/Stars and Stripes) 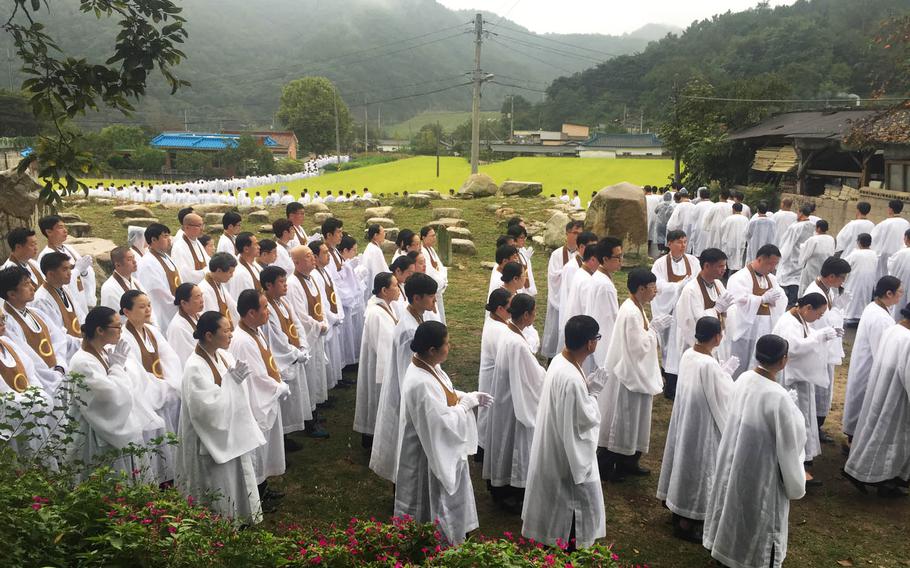 Hundreds of followers of Won Buddhism stage a peaceful procession near one of their most sacred sites on Wednesday, Sept. 28, 2016, to protest military plans to deploy an advanced U.S. missile defense system known as THAAD in the southeastern area of Seongju, South Korea. (Kim Gamel/Stars and Stripes) 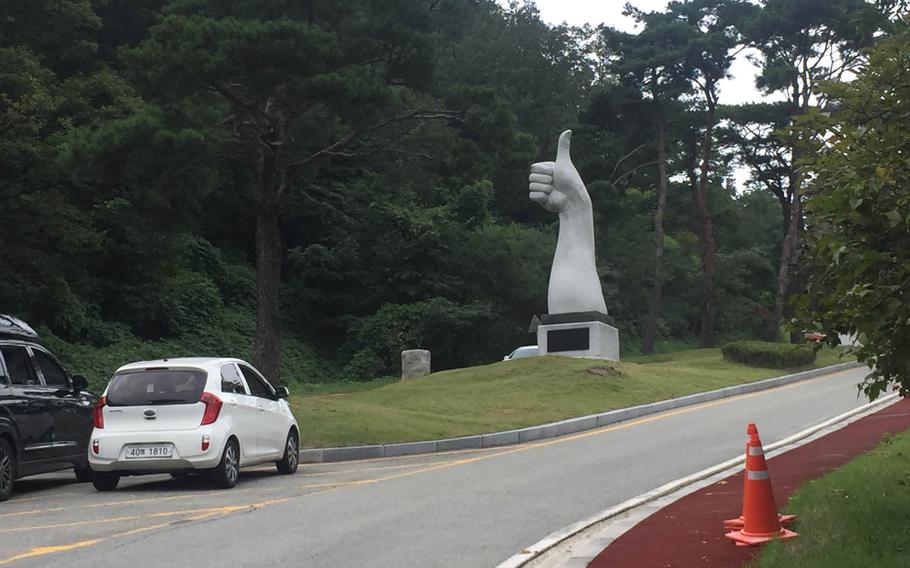 A statue points to the sky just inside the entrance to the Lotte Skyhill Country Club in the southeastern Seongju area on Wednesday, Sept. 28, 2016. South Korean media have reported that the Ministry of Defense is considering the country club as an alternate site for an advanced U.S. missile defense system known as THAAD. The ministry has not confirmed a specific location yet. (Kim Gamel/Stars and Stripes) 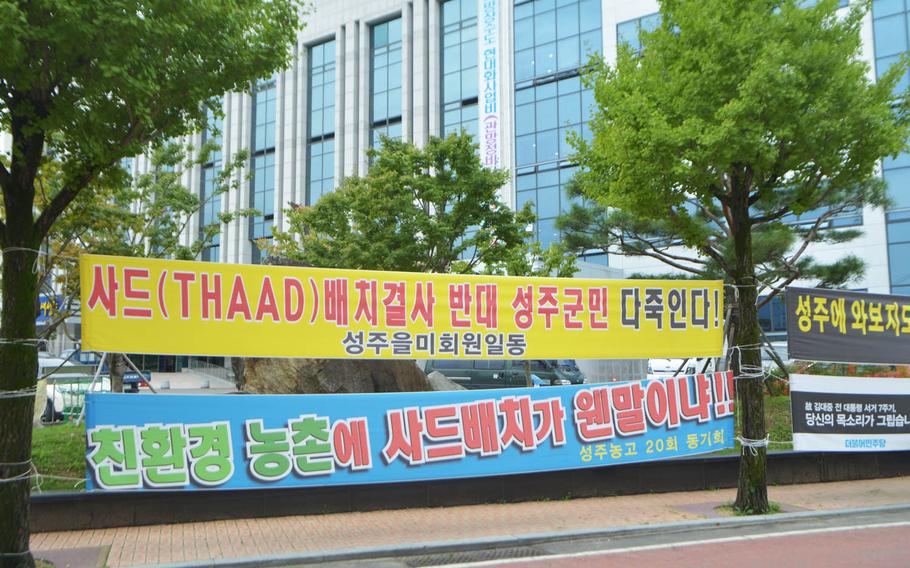 SEONGJU, South Korea — The landscape of this rural patch of country is marked by rolling mountains, fruit trees and melon fields. But lately there’s a new sight dominating the scenery – banners and signs protesting plans to deploy a high-altitude U.S. anti-missile battery in the region.

Facing a growing nuclear and missile threat from North Korea, Washington and Seoul agreed in July to station a Terminal High Altitude Area Defense system in the southeastern area of Seongju. The Ministry of Defense said it was the most strategic choice and remote enough to ensure the safety of the local population.

Residents weren’t comforted, fearing the THAAD would harm health, environment and the economy and staging near-daily protests at home and in Seoul. Tensions were so high that the defense minister was egged and his convoy surrounded by tractors during a visit meant to build support.

President Park Gye-heun has stood firm, calling THAAD’s deployment “inevitable” and necessary to guard against the North’s massive arsenal. But South Korean media have reported that the specific site - which was initially to be an artillery base in the village of Seongsan-ri - is negotiable.

Alternate sites being considered are in the same region but set farther away from population centers, with an elite 18-hole golf course emerging as a clear favorite, according to the Yonhap news agency.

The Ministry of National Defense said it planned to announce the new location on Friday after completing parliamentary audits of three possible candidates.

However, a visit to the area on Wednesday shows that opposition to the THAAD has become deeply rooted and it’s unlikely the protests will ebb anytime soon. Many residents say it’s not just about local health concerns; they don’t want THAAD anywhere on the peninsula.

Many expressed fears the THAAD will jeopardize the fragile geopolitical balance in the region as powerhouse China objects to having the system in its neighborhood.

Beijing believes the system’s powerful radar could be used against its military despite U.S. and South Korean assurances the missiles are defensive and will only be pointed at North Korea.

Kang Hee Sung, the 70-year-old owner of a convenience store just down the road from the club’s guarded entrance, worries the THAAD’s placement would put the whole country at risk.

“By having it, we’re going to become a sandwich among China, the U.S., Japan and so on because of the friction among them,” he said, standing outside his store near a woman standing by the road wearing anti-THAAD signs.

THAAD, which is designed to shoot down short, medium and intermediate ballistic missiles, is composed of five major components — interceptors, truck-mounted launchers, a radar, a fire control unit and support equipment.

Critics point out it would mainly be useful in protecting U.S. bases in the southern half of the country, but military officials stress it’s only part of a layered defense system that includes Patriot missiles already positioned to protect Seoul.

Many residents in Seongju worry the THAAD will make them a target if North Korea decides to attack.

“If war breaks out, the targeted spot is going to be the area where THAAD is deployed,” said Bae Myeong Ho, a melon farmer and local council member.

The golf course is reportedly being considered because it’s more than 2,000 feet above sea level and about 10 miles from the county center.

Yang Uk, a South Korean defense and security expert, said most people in the area have come around to accepting THAAD as long as it’s not at the artillery base.

“The protesters now represent a smaller part of the population,” he said in a telephone interview, adding that most also have another agenda such as pursuing peace talks with the North.

“They will protest even after the THAAD is deployed,” he said. “I do think there’s a safety issue, but I think the threat is the same as U.S. forces face anywhere in Korea.”

Worried about the threat from the North, taxi driver Jang Se Heun is ready to welcome THAAD. “Defense is the first priority,” he says.

Local officials in Seongju also have said they would drop their opposition as long as a suitable alternate site is chosen.

But anti-THAAD banners line the square around the county seat as well as roads and storefronts throughout the farming area, which is best known for its yellow melons. New protests also have erupted in the larger city of Gimcheon, which is adjacent to the golf course.

The country club also is close to a sacred site in the Won Buddhism religious movement. With a drone buzzing overhead to take video, hundreds of followers clad in white robes staged a peaceful procession against the anti-missile battery near the birthplace of one of its leaders on Wednesday. Organizers said they’re worried the battery’s location will disrupt visits and plans for temple stays at the site.

The issue has threatened to affect the ruling Saenuri Party’s bid to hold onto power as the country will elect a new president in December 2017 and North Korea has tried to use it against President Park Geun-hye’s government.

Yonhap reported that another hurdle will be the need to purchase the golf course, which is owned by the business conglomerate Lotte. Parliament would need to approve the multimillion dollar budget that would likely be needed to acquire the club, according to the news agency.

Despite the protests, South Korean military officials have said they hope to have the system in place by the end of next year.

“But given the accelerating pace of North Korea’s missile tests, we intend to deploy on an accelerated basis. I would say as soon as possible,” he said.