Runway resurfaced; jets back in Spangdahlem 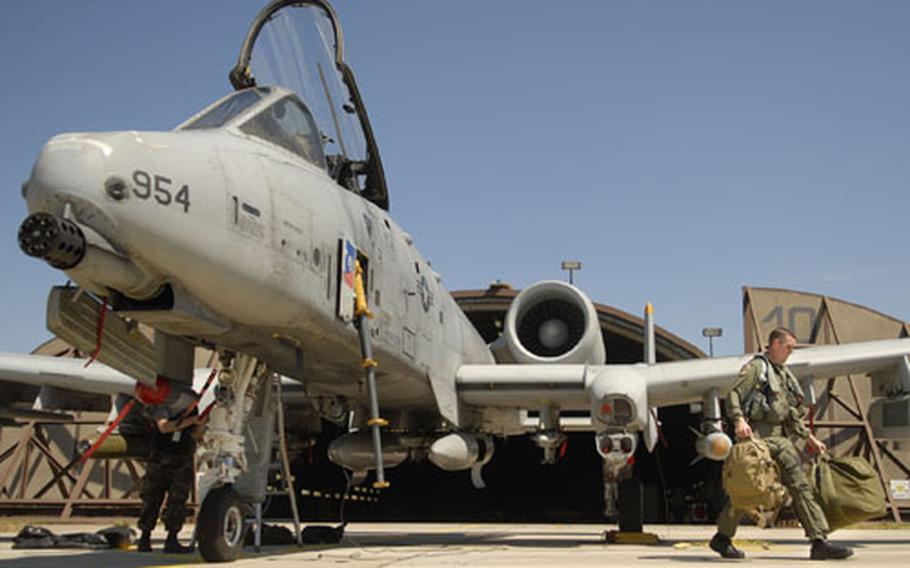 Maj. Brett Herman, a pilot from the 81st Fighter Squadron, carries his bags from his jet after returning home to Spangdahlem Air Base, Germany. (Ben Bloker / S&S)

Maj. Brett Herman, a pilot from the 81st Fighter Squadron, carries his bags from his jet after returning home to Spangdahlem Air Base, Germany. (Ben Bloker / S&S) More than 240 personnel accompanied the squadron of A-10s in June to RAF Lakenheath, United Kingdom, while Spangdahlem’s runway was resurfaced. (Ben Bloker / S&S)

SPANGDAHLEM, Germany &#8212; The familiar roar of fighter jets is back in Germany&#8217;s Eifel region.

The 52nd Fighter Wing&#8217;s three fighter squadrons began returning to their Spangdahlem home on Wednesday after deploying as far away as Las Vegas because of runway resurfacing. The wing&#8217;s 22nd, 23rd and 81st left two months ago so that pilots and crewmembers could continue to train as the landing strip shut down and workers made the repairs.

Many of the roughly 240 members of the 81st Fighter Squadron along with 14 of the unit&#8217;s A-10 Thunderbolts arrived Wednesday from RAF Lakenheath, England. Some family members waited at the various aircraft shelters scattered near the runway to meet their husbands and fathers as soon as they got out of the cockpit.

The 300-mile trip to Spangdahlem from Lakenheath was a one-tank trip that took about an hour for pilots to fly. The journey home for maintenance and support personnel took considerably longer because they traveled by bus.

Workers finished the $2.8 million runway project the night before the first planes landed. The Air Force had to resurface the 10,000-foot strip after inspectors found cracks caused by water seepage between the top and bottom layers of asphalt.

The 81st took advantage of its temporary stay in England, participating in exercises with U.S. F-15s and British Typhoon fighter jets. A-10 &#8220;Warthog&#8221; pilots also got a chance to practice close-air support missions with British troops on the ground and to fly at low altitudes.

In adddition, they got to drop live ordnance on several ranges.