Runway reopens at Bagram Air Base 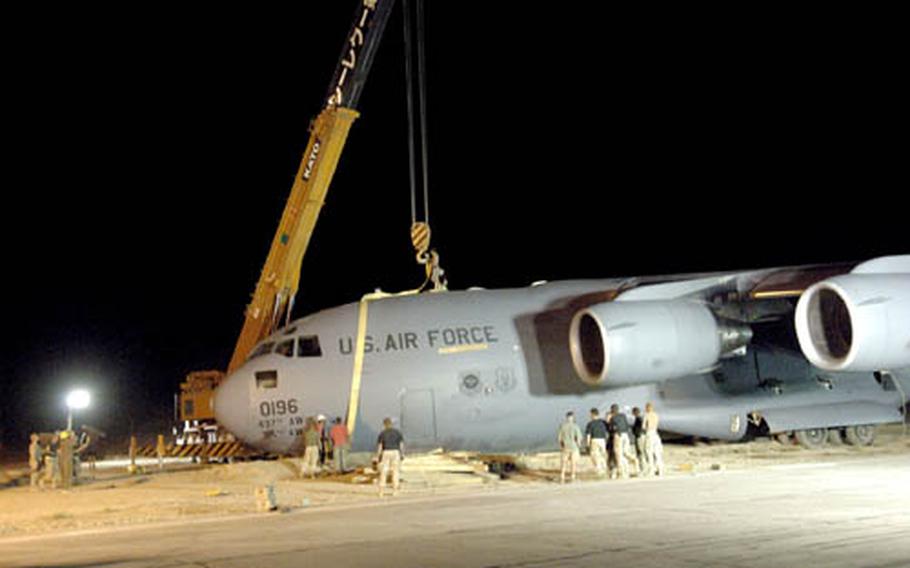 Servicemembers and contractors at Bagram air base in Afghanistan work to move a C-17 that ran off the runway, temporarily closing the airfield. The nose and landing gear of the aircraft were damaged. (Mark D. Gibson / U.S. Air Force)

The runway at Bagram air base in Afghanistan, shut down after a large military cargo jet slid off the end and was damaged during a landing Aug. 6, has been reopened, officials said Wednesday.

The C-17 Globemaster III, one of the workhorse transport planes of the U.S. Air Force, rolled off the runway and sustained damage to its nose and right main landing gears, an Air Force spokesman said Wednesday. There were no injuries reported in the incident.

The runway was closed for around 30 hours while servicemembers and contractors tried to move the plane, which came to rest with one of its wings impeding an active runway.

&#8220;Aircraft from Bagram diverted to other airfields and were able to re-launch and conduct combat missions in support of ground forces,&#8221; read an Air Force release. &#8220;Other coalition air forces also assisted in ensuring a constant airpower presence was maintained over the battlefield during the aircraft recovery operations at Bagram.&#8221;

Among other nations&#8217; aircraft supporting the Afghanistan mission are a contingent of Harrier fighter-bombers from the United Kingdom.

The difficulty in moving the C-17 came in devising a way to lift the nose of the aircraft without causing further damage, said Col. Donald Jones, 455th Expeditionary Mission Support Group commander.

Soldiers from the 391st Engineer Battalion then helped move the aircraft off the runway.

The C-17 was assigned to Charleston Air Force Base, S.C.; an investigation into the incident is ongoing.

There are approximately 18,000 U.S. troops in Afghanistan. That number has increased over the past few months as the U.S.-led coalition prepares for the Sept. 18 legislative elections. A spike in violence this summer has been credited to insurgents and former Taliban members seeking to sabotage the vote.