Running out of time, U.S. and Canadian troops rush to pacify Kandahar 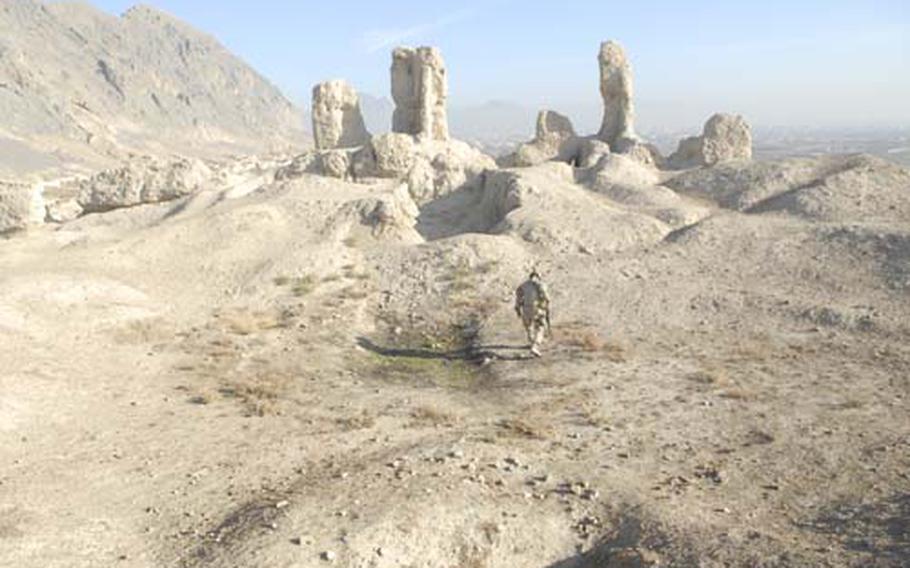 A Canadian soldier walks on top of a fortress on the outskirts of Kandahar that locals claim was built by Alexander the Great. The soldier, who goes only by Sgt. Tom for security reasons, was leading a community patrol with the Kandahar Provincial Reconstruction Team aimed at reaching out to local Afghans. (Heath Druzin / S&S)

A Canadian soldier walks on top of a fortress on the outskirts of Kandahar that locals claim was built by Alexander the Great. The soldier, who goes only by Sgt. Tom for security reasons, was leading a community patrol with the Kandahar Provincial Reconstruction Team aimed at reaching out to local Afghans. (Heath Druzin / S&S) 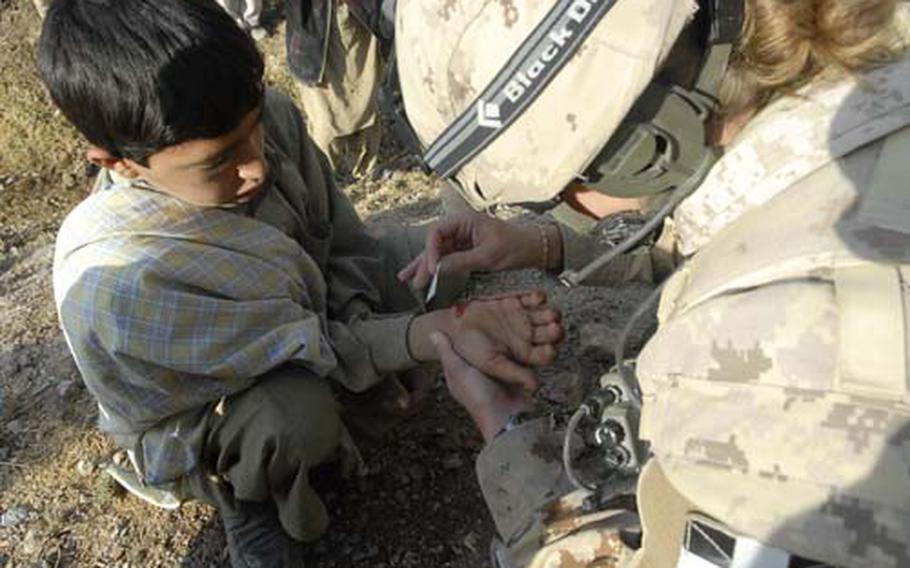 A Canadian medic treats an Afghan boy in Kandahar as part of an effort to develop a better rapport with the residents of the Taliban stronghold. (Heath Druzin / S&S) 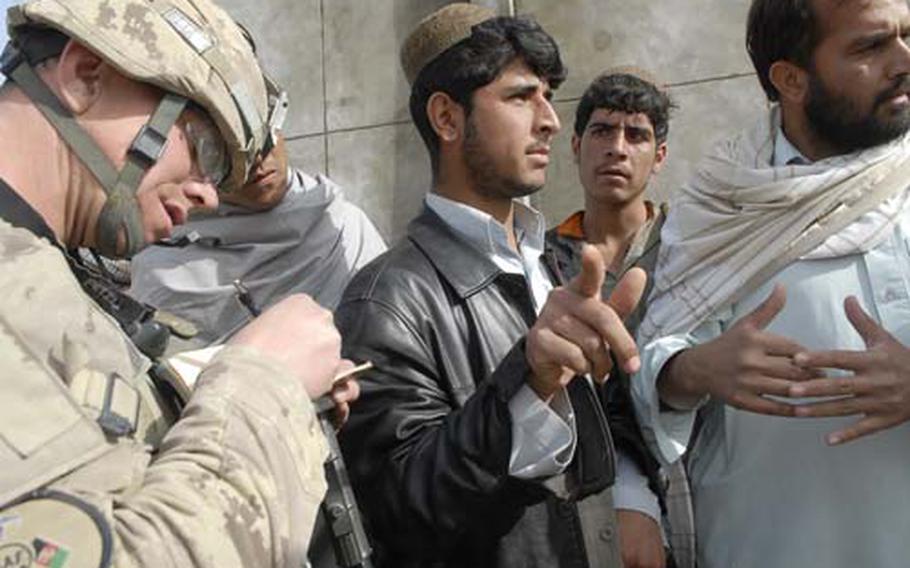 Sgt. Tom, a Canadian soldier who goes by just one name for security reasons, talks to villagers just outside of Kandahar to document their day to day issues, such as security, education, and clean drinking water. (Heath Druzin / S&S)

KANDAHAR, Afghanistan &#8212; When a platoon of U.S. soldiers rolled up to a restaurant for an impromptu kebab stop in this southern city, the busy street corner grew quiet and all eyes shifted to the patrol.

The restaurant manager quickly filled the order for a U.S. Army captain but politely asked him not to linger for fear of drawing the ire of the many Taliban militants operating in the city.

As coalition troops work to pacify this crucial city and its outlying villages, they face a tricky balance. They are stepping up patrols to secure the Taliban stronghold and gain a better rapport with residents. But every time they walk or drive down the street, they become a target &#8212; and so does anyone unlucky enough to be nearby when a roving suicide bomber or gunman spots the troops.

They are also dealing with an insurgency that has stepped up attacks recently, inflicting heavy casualties on soldiers with roadside bombs and terrorizing residents with suicide bombings, like one placed in a horse-drawn cart that rocked the heart of Kandahar city on Dec. 24, killing eight people.

Most American and Canadian soldiers interviewed admit that security in the city is still shaky, but say their increased presence has put residents more at ease, pointing to the bustling city center and crowded bazaars.

"It&#8217;s all about perception," said Canadian Brig. Gen. Daniel Menard, the top commander in Kandahar. "The number of incidents are very similar but we have been able to provide that perception of stability in the city."

Menard is pushing to have a "ring of security" around Kandahar city by May, when fighting traditionally intensifies as the weather warms and thick foliage provides cover for insurgents. To do this, he is encouraging the Canadian and American soldiers who work in the area to get out on foot, take off their helmets when they feel comfortable, and move off large, heavily fortified forward operating bases in favor of smaller, less imposing compounds.

The plan is in line with the broad strategy laid out by Gen. Stanley McChrystal, the top commander in Afghanistan, for coalition troops to work more closely with regular Afghans to erode support for insurgents.

"Everything we do has to be population-based," Menard said. "I can go after every single Taliban and I won&#8217;t be able to turn that corner [without a supportive populace] &#8230; I hate FOBs. I think this is not the way to fight a counterinsurgency. We need to live with the people."

Kandahar is Afghanistan&#8217;s second-largest city with around 800,000 people and has long been considered the country&#8217;s spiritual capital. It was here that Taliban leader Mullah Omar wrapped himself in a cloak said to be from the Prophet Muhammad and proclaimed himself "commander of the faithful" and where the Taliban maintains a strong presence.

Providing security around Kandahar is a joint U.S.-Canadian effort and breaking the Taliban support network has proven difficult, with insurgents having particularly good success recently targeting troops with roadside bombs.

"As soon as we head out of the city center, the enemy pretty much has full rein," said Capt. Mike Thurman, 31, the company commander for a military police company that trains Afghan police and conducts joint patrols with them in Kandahar.

One tactic Canadian forces are using to get closer to residents is the use of "community patrols," in which soldiers with the Kandahar Provincial Reconstruction Team go out to city neighborhoods and outlying villages, often with Afghan soldiers or police, to talk to regular Afghans about day-to-day problems such as security, education and drinking water.

In stark contrast to the aggressive posture most troops took just a few months ago, the Canadians allow people to walk up to them and let traffic pass by when they&#8217;re walking the roads on foot. The close quarters ratchets up the risk for soldiers, but it&#8217;s worth it to put Afghans at ease around the military, said Canadian Lt. Col. Carl Turenne, the team&#8217;s commanding officer.

"The city belongs to the Afghans," he said. "We are guests here."

On one such patrol, a platoon of Canadian soldiers visited a small enclave just outside of Kandahar to talk to villagers. A group of men said the village elder was pilfering aid and one elderly man invited the soldiers for tea.

As the crowd swelled around the platoon, though, the soldiers grew uneasy and with apologies abruptly headed back to their armored vehicles. For troops trained to fight, the new approach requires a delicate balance between protecting themselves and befriending the people they are supposed to defend.

"We kind of have a mentality to be super polite, super professional, but have a plan to kill everybody," said Canadian army Sgt. Tom, who would only use his first name, citing a specific security threat against him.

In addition to the stepped-up military presence, the International Security Assistance Force is greatly expanding civilian presence on the provincial reconstruction teams. The U.S. PRT in Kandahar, responsible for improving civil institutions, is slated to grow from 15 people to 50 by April 1 with the goal of making major improvements in the next 1&#189; year, said Bill Harris, the senior U.S. reconstruction representative in Kandahar.

With rampant corruption, grinding poverty, and an entrenched insurgency, though, both Harris and his military counterparts have a daunting task ahead.

"Almost everything has to go right for us in our plan and we have to get lucky," Harris said, "and I believe all that can happen."