'Running of the Herd' honors GIs who fought in Vietnam battle 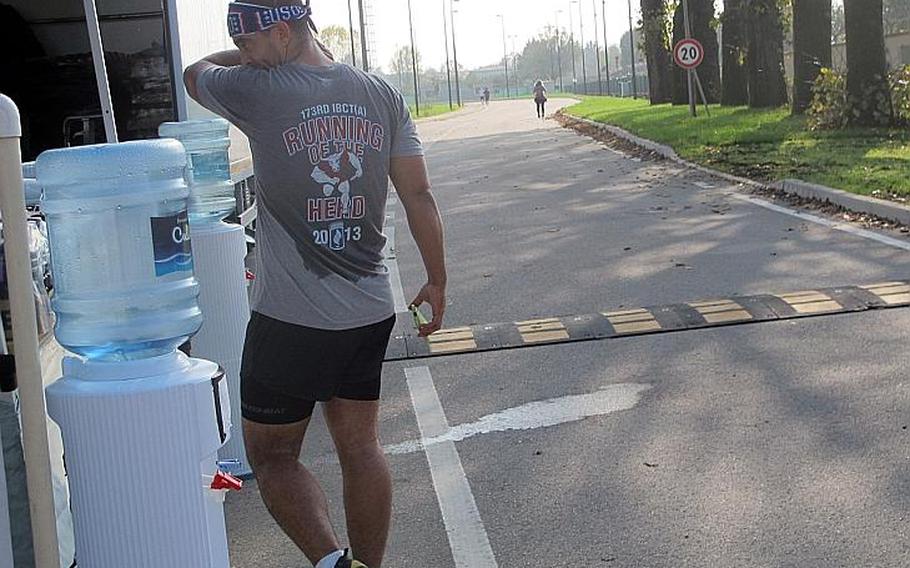 A runner wipes away sweat after completing two laps around the track - nearly five miles - in the Running of the Herd, a relay race commemorating a deadly battle in Vietnam on Nov. 8, 1965 in which 48 soldiers with the 173rd Airborne Brigade died. ()

A runner wipes away sweat after completing two laps around the track - nearly five miles - in the Running of the Herd, a relay race commemorating a deadly battle in Vietnam on Nov. 8, 1965 in which 48 soldiers with the 173rd Airborne Brigade died. () 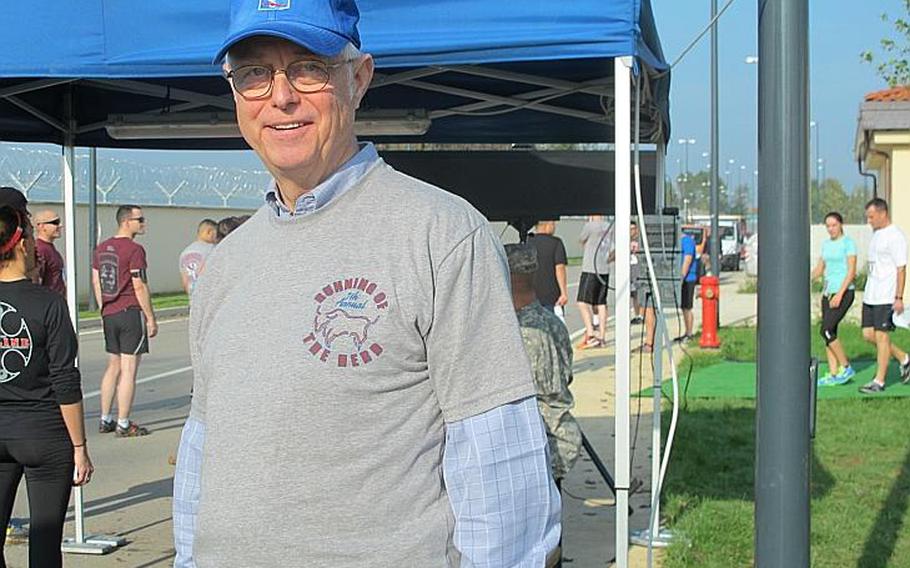 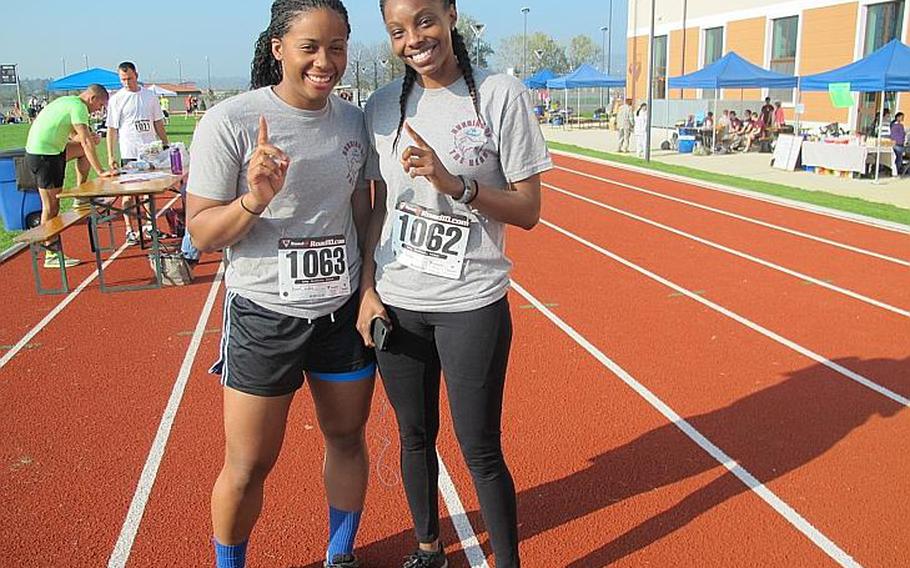 PFC Tisha Prescott (left) and 2nd Lt. Pierjea Lyon, of the only all-female team of 46 in the race - and so already winners in the women's category. The relay race commemorates a battle in Vietnam on Nov. 8, 1965 in which 48 soldiers with the 173rd Airborne Brigade died. () 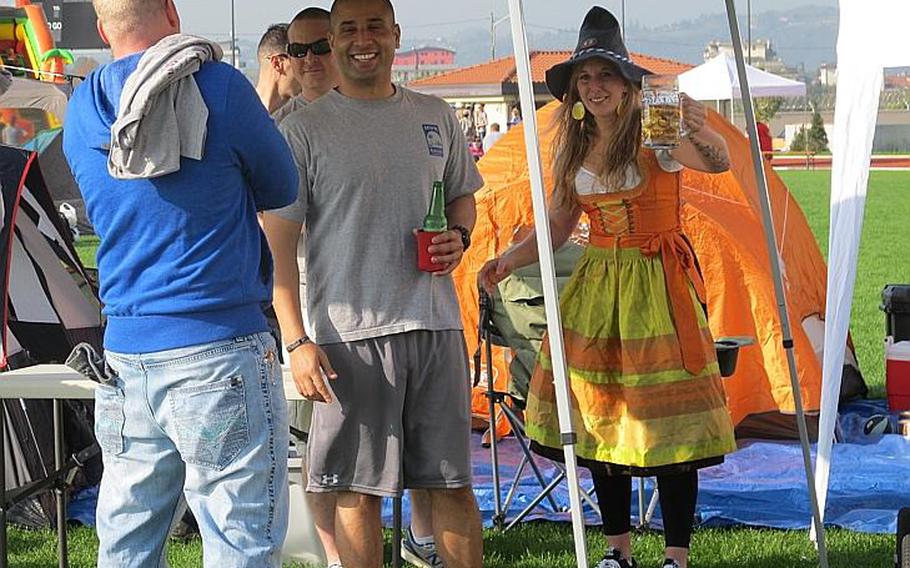 The run was the lead event but there were bouncy castles, entire barbequed pigs, beer and a festive atmosphere. The relay race commemorates a battle in Vietnam on Nov. 8, 1965 in which 48 soldiers with the 173rd Airborne Brigade died. ()

VICENZA, Italy — Operation Hump, in which 48 soldiers with the 173th Airborne Brigade were killed and many more wounded, was largely forgotten, just one of several horrific, unheralded battles of the Vietnam War.

“Well, yes and no. If you were in it, yes,” said Tim Austin, a former 173rd Airborne Brigade forward observer and retired reserve lieutenant colonel. “If you weren’t, no.”

That changed in 2006, when the country-music duo Big & Rich, after meeting a survivor of the battle in a bar, as the story goes, recorded a song about it.

“Eighth of November” struck a chord the next year with some 173rd soldiers deployed to Afghanistan. They wanted to honor the courage and sacrifice of their forebears, and give meaning to their own. They decided on a relay race, with its implicit teamwork, on the anniversary of the battle. And they sought to make it a tradition for the 173rd, also known as “Sky Soldiers” and “The Herd.”

Which is why on Thursday Sgt. Louis Ramirez found himself wearing a Spiderman costume as team captain of one of more than 46 teams of troops running a 24-hour relay race at Del Din, the new home of the 173rd Infantry Brigade Combat Team (Airborne).

Called the “Running of the Herd,” the race was being run for the first time in Vicenza, the seventh consecutive time in history and on the 48th anniversary of the battle.

“It’s fabulous,” said Austin, secretary of the 173rd Airborne Brigade Association, who was on hand Thursday to watch the event. “I wish every guy from first batt (battalion) could be here. It would be therapeutic.”

The race had few rules. Each team had seven members who were supposed to each go at least two laps around the track, a distance of about 2.5 miles, before handing the cardboard dagger off to a team mate. One member of the team was supposed to be on the track at all times. That was about it.

“Yes, some people have beers already,” noted 2nd Lt. Rambalina “Rambi” Williams, officer in charge of the event, “hard as that is to believe.” It was shortly after 10 a.m., when the race began.

Some of the teams, she said, were highly competitive and wanted to win the prize for fastest male team or fastest coed team. (There was also a prize for the fastest female team, but since there was only one, it was already a winner.)

Others — Williams looked at the team wearing traditional German lederhosen and dirndls — “just want to drink and have fun,” she said.

But on average, she said, each runner would end up running about 15 to 20 miles over the 24 hours.

Sgt. 1st Class Jonathan Myers, in traditional running attire, explained his strategy: “You take a lot of cat naps and eat lots of sugar and drink a lot of water,” he said. Myers was participating to honor the 173rd history “plus camaraderie between friends in my unit,” he said.

He wasn’t clear on the history of the battle, but he said he had been affected by the country song about it.

“I’m not a huge country-song fan, but some things are more powerful than the genre of their music,” he said. “I heard that song and I thought, ‘I’m coming to one of the greatest units in history.”

Operation Hump pitted companies of the 173rd and a battalion of Australians against some 1,200 Viet Cong fighters hiding in the jungled hills north of Bien Hoa.

Although 48 173rd soldiers were killed in close combat, sometimes hand to hand, the battle was not unique to those in Vietnam.

Austin spent 1970 in Vietnam as a second lieutenant.

Contact with the Viet Cong was a daily occurrence, he said, and everyone froze in fright the first time.

“It didn’t matter what a badass paratrooper you were, someone would have to kick you.”

Austin saw many men die and other terrible things, and the carnage and trauma followed him through the decades, he said, with recurring nightmares and anxiety. He worked all the time.

“I was very irritable. I didn’t want to take no lip. I don’t know how my kids put up with me.

“The guys I knew in the Herd in Houston — we were all in the same boat,” he said.

Yet he wouldn’t change it.

“It’s like a brotherhood (most people) can never understand,” he said.