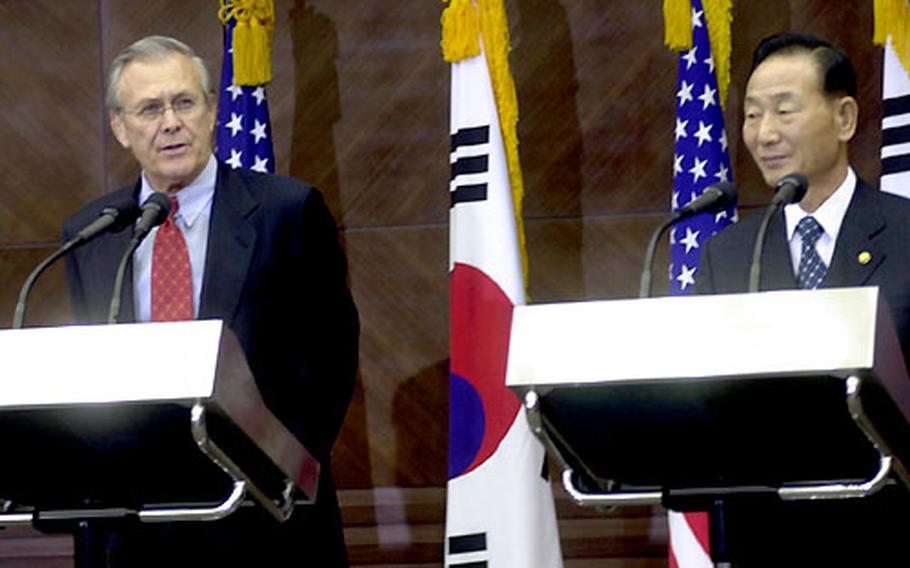 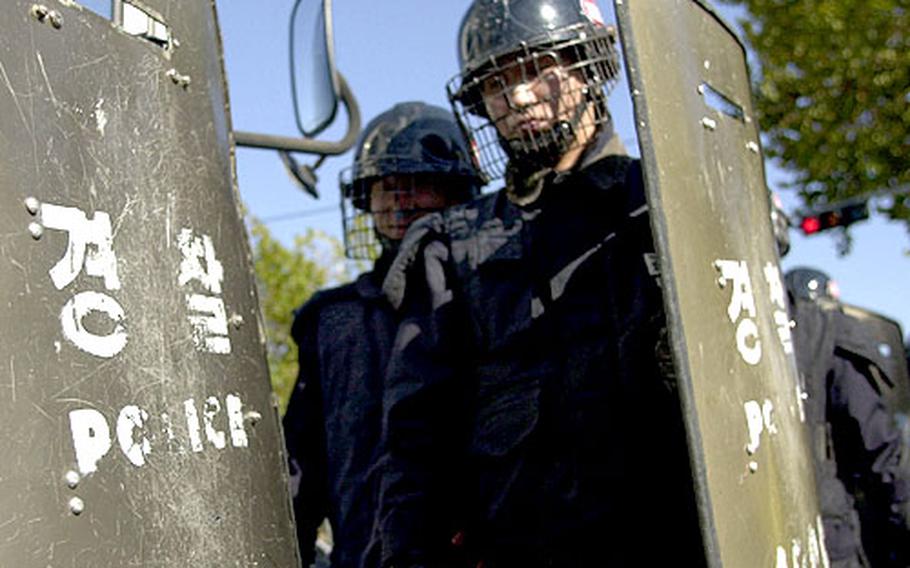 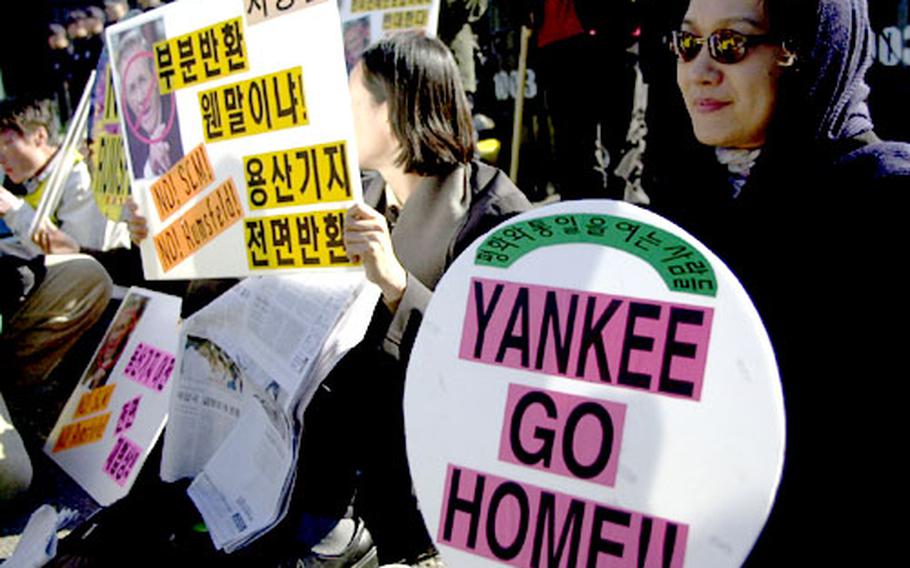 SEOUL &#8212; U.S. Defense Secretary Donald Rumsfeld said Monday he held one of the most &#8220;substantive&#8221; meetings yet with South Korean defense officials but the two sides were unable to complete final plans to relocate troops and move the largest U.S. Army base in Seoul.

After the 35th Security Consultative Meeting, Rumsfeld also thanked Defense Minister Cho Young-kil for committing troops to Iraq, although still to be disclosed is the number and type of troops to be sent and date they&#8217;ll deploy. South Korean newspapers have reported 3,000 mostly non-combat troops will be sent to Iraq and South Korea will contribute $260 million for reconstruction.

The defense chiefs also did not disclose details on plans to shift the 37,000 U.S. servicemembers stationed in South Korea. A joint communiqu&#233; said the two sides expressed &#8220;their regret&#8221; that agreement on relocating Yongsan Garrison facilities could not be reached before the meeting but they will work to complete the relocation at the &#8220;earliest possible date.&#8221;

&#8220;We will undertake great efforts to make sure that we reach a final conclusion on this matter prior to the end of this year,&#8221; Cho said.

On June 27, the two defense chiefs agreed to have a plan in place to move Yongsan by Monday&#8217;s meeting. &#8220;We are working to transform our combined military posture to defend Korea and strengthen security and the prospects for peace on this peninsula,&#8221; Rumsfeld said. &#8220;We discussed ways to realign and consolidate U.S. forces based in Korea into two major hubs in two phases.&#8221;

The two-phase plan, originally announced in July, would move U.S. forces from urban areas. The 2nd Infantry Division would be consolidated into hubs at camps Red Cloud and Casey while facilities are expanded around Osan Air Base and Camp Humphreys. Rumsfeld said he would visit those bases and Camp Casey on Tuesday.

New technology will be used to deter aggression against South Korea, he said. Earlier this year, U.S. officials pledged to spend $11 billion over the next three years on 150 systems that improve South Korea&#8217;s defense.

The United States and South Korea also have discussed transferring some missions performed by U.S. troops to the South Korean military but all changes will take place only after consultation, Rumsfeld said, adding, &#8220;Nothing we do will diminish our commitment to South Korea&#8217;s security.&#8221;

Cho said the two sides agreed 10 missions eventually will be transferred to South Korea&#8217;s military but shifting missions such as the Joint Security Battalion to South Korea may be &#8220;premature.&#8221;

Since April, State and Defense Department representatives and South Korean officials have held five rounds of force realignment talks. They have agreed Yongsan facilities should move by 2006, with South Korea to buy property for the move beginning in 2004.

About 6,000 of 7,000 soldiers at Yongsan should move to the Camp Humphreys area, U.S. Forces Korea commander Gen. Leon J. LaPorte said in June.

North Korea&#8217;s nuclear weapons program is a proliferation concern, Rumsfeld said. The United States is working with South Korea, Japan and China &#8220;to move along a diplomatic track in the hope that they can persuade the North Korean government to conduct itself in a manner that is peaceful,&#8221; he said.