Rumsfeld: No plans to resign in face of criticism 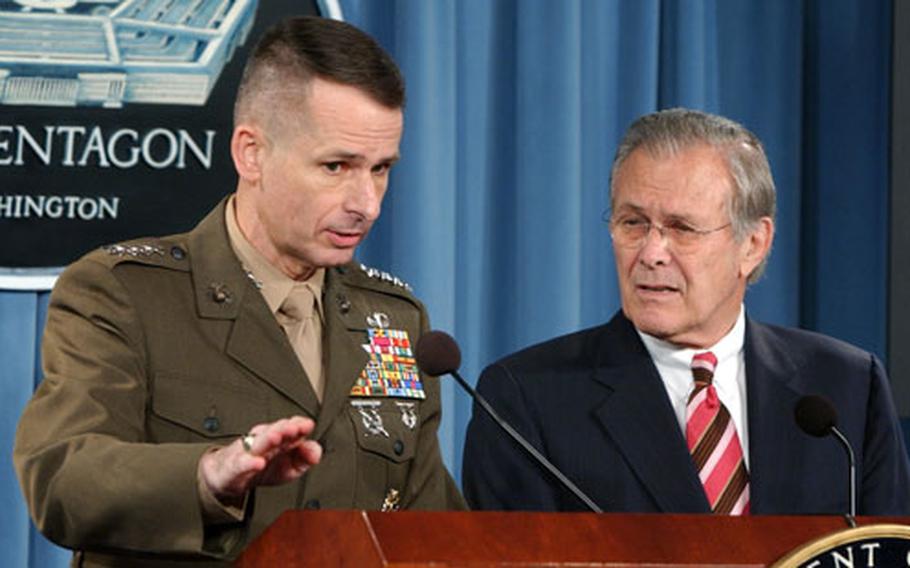 Defense Secretary Donald Rumsfeld, shown last week with Chairman of the Joint Chiefs of Staff Gen. Peter Pace, said Tuesday that he will not resign amid criticism from several former commanders. (AP)

WASHINGTON &#8212; Secretary of Defense Donald Rumsfeld declined to directly respond to his detractors on Tuesday but said he had no plans to step down as a result of the criticism.

The embattled secretary recited a long list of major changes in the Pentagon and the nation&#8217;s military structure &#8212; things like modernization of the Army, the latest round of base closings, and the expansion of special forces &#8212; as the reasons why some have been upset during his more than five years in the post.

He also noted that the first Marine Corps general, Peter Pace, has been promoted to chairman of the Joint Chiefs of Staff, the nation&#8217;s highest-ranking military officer. The Marine Corps is part of the Department of the Navy and until the 1970s was not even represented among the Joint Chiefs.

Many expensive weapons systems have been canceled, such as the Crusader mobile artillery system, and many U.S. forces have been brought home from Europe and South Korea, Rumsfeld said.

&#8220;With all of those challenges, to try and get from the 20th century, the industrial age, into the information age, the 21st century, from conventional warfare to asymmetrical warfare, is a difficult thing to do,&#8221; he said.

Over the last two weeks, six retired generals, including Maj. Gen. John Batiste, the former commander of the 1st Infantry Division, have publicly criticized Rumsfeld&#8217;s leadership and called for his resignation.

Earlier Tuesday, President Bush dismissed criticism of Rumsfeld and said he would remain in the administration.

Pace said that the flap over Rumsfeld has not been an issue amongst the deployed troops.

As to the recent criticism of him from one-time commanders, Rumsfeld said, &#8220;We should be reasonably tolerant with respect to things that get said.&#8221;

Asked whether there was any validity to the criticism of him, Rumsfeld said, &#8220;Well, you know, I&#8217;ve been hearing all about all of this, and I would prefer to let a little time walk over it.

The Associated Press and Stripes reporter Lisa Burgess contributed to this report.