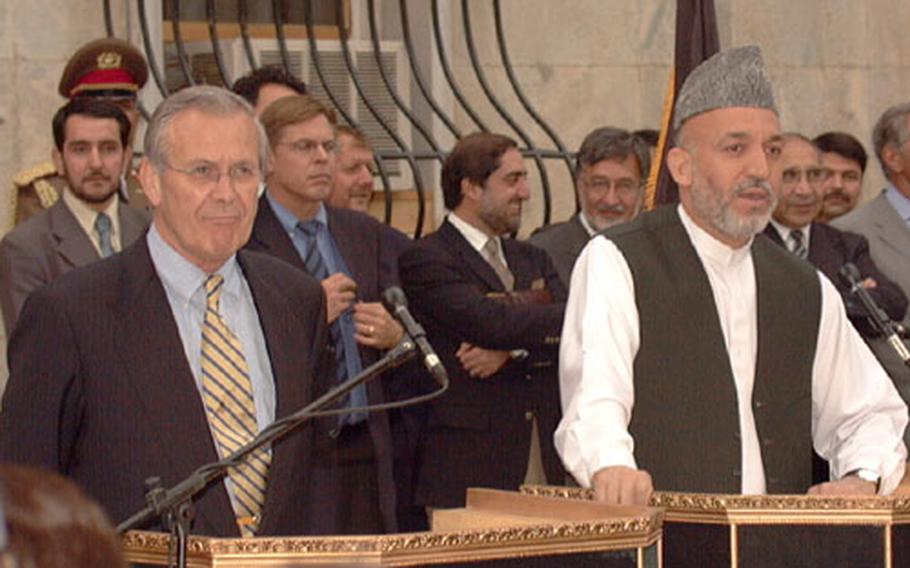 Secretary of Defense Donald Rumsfeld, left, and Afghanistan President Hamid Karzai hold a joint press conference Friday at the presidential palace in Kabul. Rumsfeld and Karzai met to discuss a variety of subjects including reconstruction and the recent firefighting near the border of Afghanistan/Pakistan border. (Rick Emert / S&S)

KABUL, Afghanistan &#8212; Secretary of Defense Donald H. Rumsfeld met with Afghanistan President Hamid Karzai on Sunday in the country&#8217;s capital four days before the second anniversary of the terrorist attacks of Sept. 11, 2001.

The two discussed improvements and reconstruction in Afghanistan, as well as recent firefights that took place near the Pakistani border and in the Zabul province. Karzai and Rumsfeld spoke briefly in a joint press conference in front of the presidential palace after the meeting.

&#8220;Every time I come back to Afghanistan I see progress,&#8221; Rumsfeld said, adding that he has seen a continuing improvement in security, as well.

&#8220;I&#8217;m most interested in the steps the government of Afghanistan has been taking to strengthen&#8221; reconstruction and development within the provinces, he said.

Rumsfeld added that recent combat operations, such as &#8220;Operation Mountain Viper,&#8221; have been successful, but the increased fighting shows that terrorists are using borders to their advantage. The secretary made the statement as hundreds of Afghan government troops prepared Sunday for a new offensive against Taliban guerrillas, who recently stepped up attacks in the south and east, including along on the border with Pakistan, The Associated Press reported.

Karzai said that the governments of Afghanistan, Pakistan and the United States are working together to combat the fighting.

Although cooperation from other countries may be helpful, ultimately, Afghanistan&#8217;s government and citizens must bring peace and security, Rumsfeld said.

&#8220;Security in Afghanistan is the responsibility of Afghanistan,&#8221; he said.