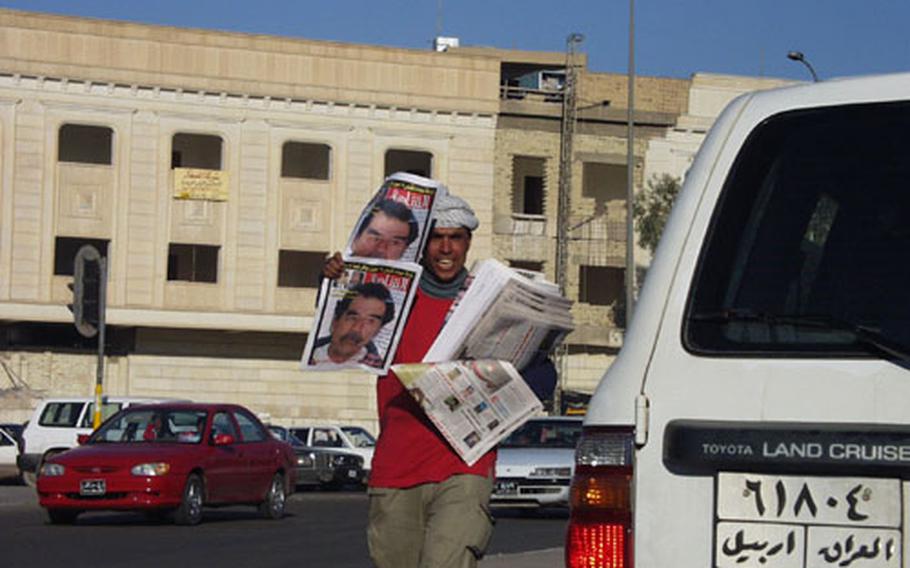 A vendor waves a copy of a tabloid featuring stories on deposed Iraqi leader Saddam Hussein — among them a piece speculating that the jailbird is really a Saddam double. Though most Iraqis believe their former president is behind bars, bizarre theories still circulate as to his whereabouts. (Ward Sanderson / S&S)

BAGHDAD, Iraq &#8212; Along with the musky smell of new sheep&#8217;s leather wafting from the slick jackets in the shop, there hangs the scent of something else.

Something is rotten in Baghdad.

Though most Iraqis seem to have accepted the fact Saddam was nabbed on Dec. 13, bizarre rumors on his real fate and whereabouts still circulate. Most of the theories suggest the military nabbed a double, not Saddam. The credulous majority, however, seem to view the rumors as a psychic hangover from years of brainwashing.

The sheer span of time &#8212; more than three decades &#8212; that the strongman ruled Iraq and the hard rivets he used to keep it that way made the man a myth. Children even sang songs about Saddam the very day he was caught, not so much out of respect, according to one Iraqi, but out of routine.

Though he&#8217;s heard the rumors, Abbass believes Saddam is in custody. Many Iraqis who believe the official U.S. account said the way the grizzled man on the television moves and gestures proves he is the ex-president.

The shop&#8217;s owner, Ali Abbass, said about half of Iraqis still mourn the fall of Saddam. When news broke that Saddam had been captured, celebratory gunfire rattled throughout Baghdad. Ali says yet more lead was spent after some Sunnis and Baathists heard rumors that Saddam had been sighted, still free, in Fallujah.

Recent assassinations of top Baathists, however, have made such public displays dangerous. According to news reports, the killings have become almost daily events.

For his part, Ali Abbass is unmoved. The ex-army officer suffered head wounds in the war with Iran and retired, and said many like him were cheated out of disability payments. He is convinced Saddam is under arrest, and calls it justice. But he said Saddam should have fought to the death, because that&#8217;s what he asked of his people.

Outside the market where rusty cars weave in a tsunami of dust, a scarved man waves a tabloid. Its cover is the image, released by U.S. forces, of the shaven Saddam. One headline sells a story claiming the man in the picture is really Jassim Al-Ali, allegedly a longtime Saddam double. How can the tabloid tell? By a mark on the man&#8217;s left temple that only Ali is supposed to have. In color, however, the dot on the jailbird looks more scab than birthmark.

American military and coalition officials say they don&#8217;t proactively attempt to dispel rumors, even when they&#8217;re in print.

And Iraq&#8217;s free press has only been that way for a short time and is still getting the hang of it. Responding to a press conference question on rumors in general, coalition spokesman Charles Heatly said authorities plan no crackdowns on the tales, tall or otherwise.

Some Iraqis are impervious to the chatter. Down the street in a nook of an electronics store, stacked high with boxes and jittery with cartoon colors strobing on television, Salad Ibrahim celebrates Saddam&#8217;s capture.

The former flight scheduler for Iraqi Airways lost his job and home several years ago because of a broken economy that he said resulted from Saddam&#8217;s mismanagement. Now, he tries to bounce back. Some of his most popular items are the silver sat receivers that were illegal earlier this year.

Those who pine for Saddam or refuse to accept his arrest, Ibrahim said, do so out of regret for power lost.

But new rumors continue to spring up, some from more credible sources. Ibrahim pointed at the text crawl on an Arab news station. It reported that Saddam was, in fact, captured &#8212; but by Kurds, not by U.S. intelligence or troops. According to that account, the Americans merely picked the dictator up. Similar reports have run in British, Iranian and Kurdish media. Gainer, the military spokesman, said he has no information on the claims.

Back in the leather shop, though, either version made little difference. Ghassan Abbass straddled the line between celebrant and mourner. His conflicted opinion may help explain Iraqis&#8217; split on the fate of Saddam.