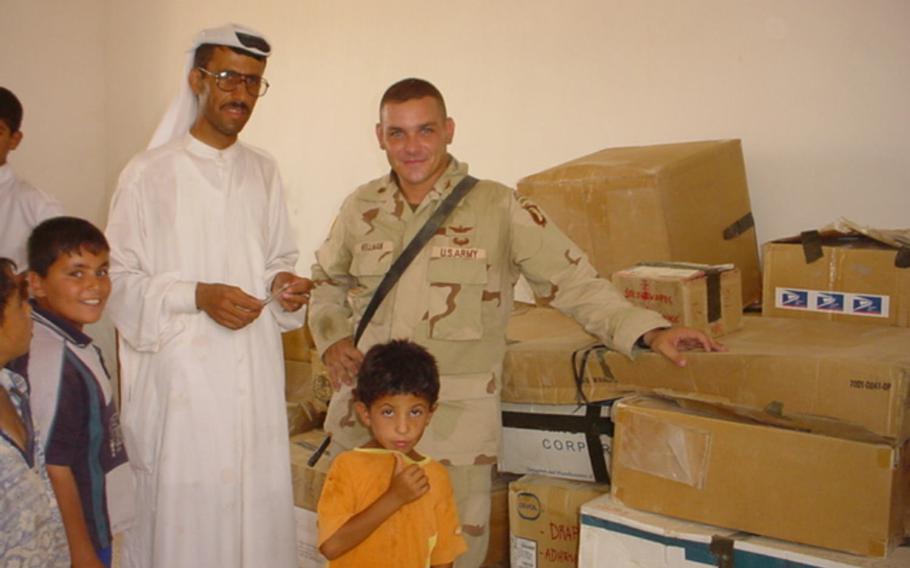 Dr. Mohammed Ismail, left, and then-Maj. Fred Wellman, are pictured here on Sunday, Aug. 10, 2003, in a U.S.-built clinic alongside boxes sent by the American public for ''Operation Fred,'' a campaign to collect school supplies, medicine and other necessary goods after the U.S.-led invasion of Iraq. (Courtesy of Fred Wellman)

Dr. Mohammed Ismail, left, and then-Maj. Fred Wellman, are pictured here on Sunday, Aug. 10, 2003, in a U.S.-built clinic alongside boxes sent by the American public for ''Operation Fred,'' a campaign to collect school supplies, medicine and other necessary goods after the U.S.-led invasion of Iraq. (Courtesy of Fred Wellman) 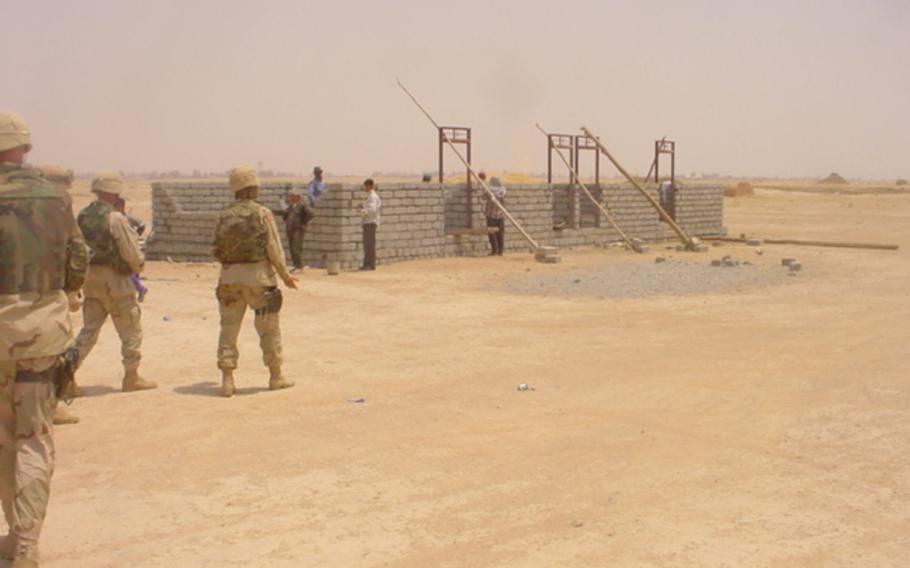 American soldiers are pictured visiting a school under construction in the village of Jeddalah, near Qayara Airfield West, in this photo dated Monday, July 7, 2003. (Courtesy of Fred Wellman) 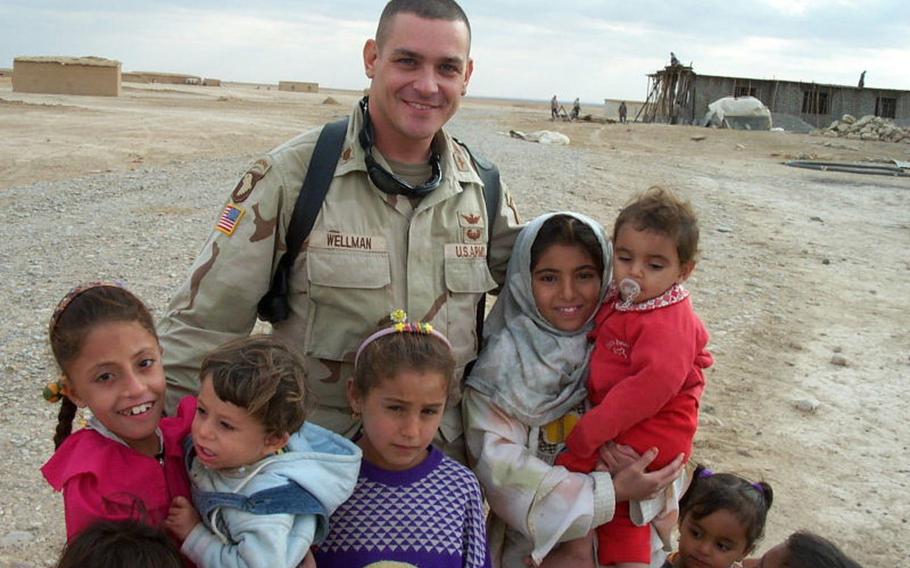 Pictured here on November 13, 2003, Fred Wellman, then a major in the U.S. Army's 101st Airborne Division combat aviation brigade, poses with the children of Jeddalah village near Qayara Airfield West, about 40 miles south of Mosul. (Courtesy of Fred Wellman) 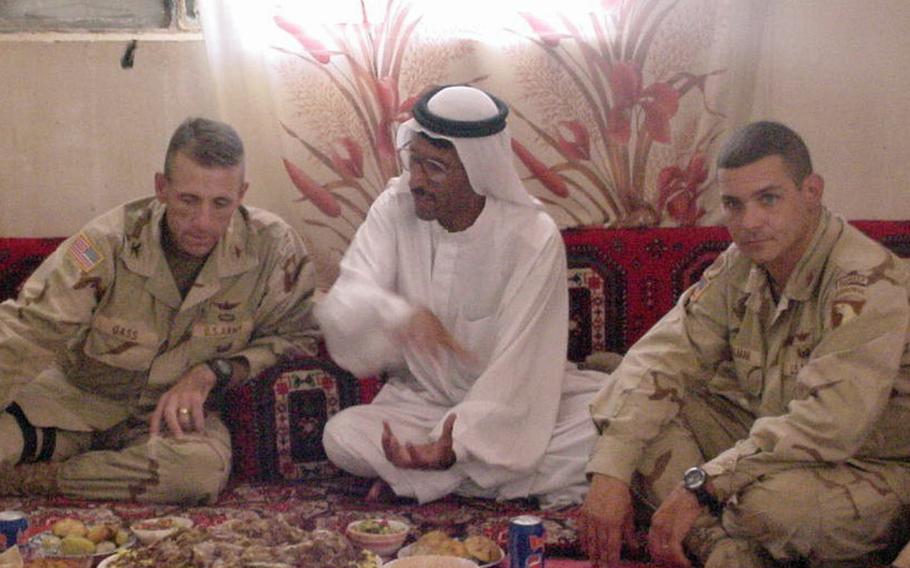 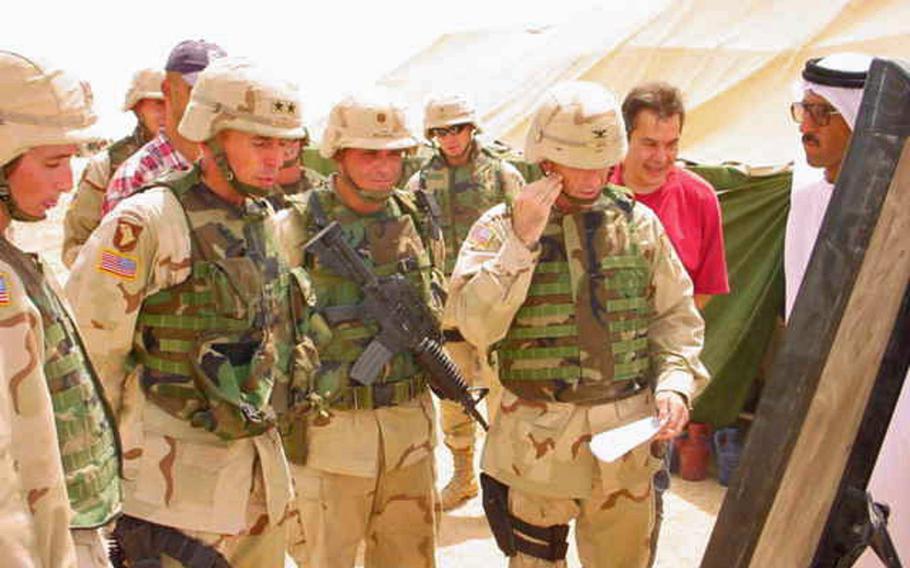 Then-Maj. Gen. David Petraeus is briefed by then-Maj. Fred Wellman, middle, and then-Col. Gregory Gass, right, on a visit to the village of Jeddalah on Thursday, July 10, 2003. Dr. Mohammed, the village sheikh and doctor, is in white on the far right. (Courtesy of Fred Wellman) 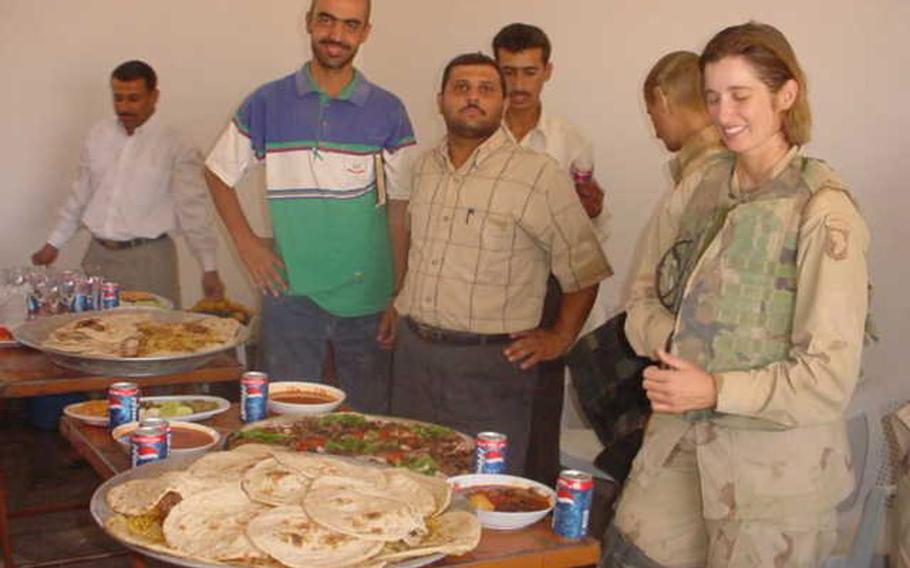 Pictured at a lunch in this undated photo from Fred Wellman's collection are Iraqi translators Bassam Sabry, left in green and blue, and Osama Saado to his right with then-Capt. Kellie Rourke on the far right. (Courtesy of Fred Wellman) 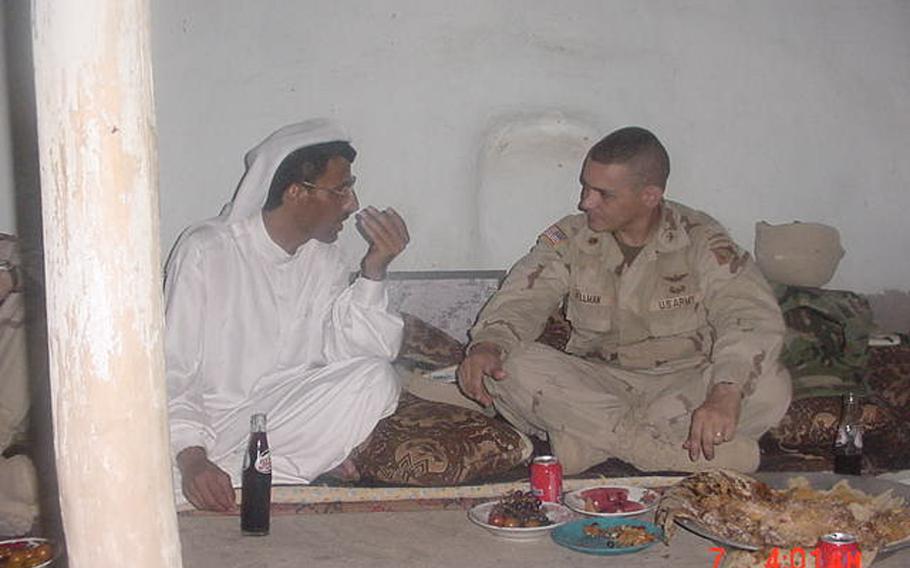 Dr. Mohammed Ismail and then-Maj. Fred Wellman share one of their earliest meals together in Jeddalah, shortly after U.S. troops occupied nearby Qayara Airfield West, in this undated photo from 2003. Mohammed would go on to become an important partner in U.S. reconstruction efforts in the area. (Courtesy of Fred Wellman)

NEAR QAYARA AIRFIELD WEST, Iraq — Using online satellite photos, Fred Wellman stalked this cluster of small buildings over the past few years, fearing what had befallen the Iraqis he’d befriended here after the U.S.-led invasion in 2003.

As an Army major then, Wellman made media appearances touting U.S. successes in and around the dusty village of Jaddalah Ismail, helping turn it into an early symbol of hope in U.S. efforts to rebuild Iraq and win over its people.

More than a decade later, he feared a much darker fate for the village.

After Jaddalah and the neighboring airfield he helped secure in 2003 fell to Islamic State as it swept across Syria and Iraq in 2014, Wellman wondered whether it remained a struggling seedbed for so many dreams, or had instead become a graveyard.

He grew anxious, watching signs of village life disappear from overhead imagery. He publicly lamented war’s horrors. He got angry. He lost hope.

Like that of many servicemembers, Wellman’s wartime experience was defined by his work in Iraqi villages, where he’d venture — often armed with little more than a sidearm — to discuss locals’ needs and concerns over tea and a shared meal with leaders.

“The real story of Iraq wasn’t guys kicking down doors,” Wellman said. “It was guys like me sitting down, eating sheep.”

But his post-war experience has been one of watching, usually at a helpless distance, as their shared hopes and accomplishments have turned to agony and ruin.

As ISIS lost its grip on the area around Qayara Airfield West last summer, Wellman was hungry for news of the communities surrounding the base, known as Q-West, where he’d deployed with the 101st Airborne Division’s combat aviation brigade. But he wasn’t optimistic.

Army Lt. Col. Kellie Rourke, who worked alongside Wellman doing civil affairs projects near the airfield as a captain in 2003, shared his frustration. She wrote a doctoral dissertation on terrorism and the rejection of democracy-building efforts in Iraq and Afghanistan.

“It’s a sad situation to have to sit back and watch after having served there,” said Rourke, who was in Iraq for both the U.S.-led invasion and the 2011 withdrawal. “Unfortunately, there were so many steps backward taken when the Americans withdrew.”

Almost immediately after the invasion, under the command of then-Maj. Gen. David Petraeus, the 101st began dumping millions in seized Baathist cash into reconstruction projects in northern Iraq in an effort to build local support and stimulate the economy.

Called Jaddalah for short, the village became a focal point for those efforts around Q-West, said Rourke, who held the purse strings in that area. The Americans hoped that by building local ties they could prevent attacks on the air base, which didn’t even have a fence line early on.

Their first inroads came soon after occupying the airfield, when Mohammad Ismail, the village sheikh and a doctor who’d served in the Iraqi army, sought their help getting clean water.

Dr. Mohammad, as he was known, soon became a cultural advisor and guide for the Americans, turning Jaddalah into a model for other villages that were skeptical of the coalition. For Wellman and Rourke, both of whom logged several tours in Iraq, there was no more special place than Jaddalah.

“In my eight years in Iraq, that was the highlight of it — to work with that village,” said Rourke, who deployed to the country for some part of every year of the war, except 2009.

Wellman, a veteran of Operation Desert Storm, would serve three tours during Operation Iraqi Freedom, but his work at Q-West right after the invasion, perhaps more than for any of his fellow Screaming Eagles, was deeply personal.

He’d been the namesake of a stateside campaign dubbed “Operation Fred,” which brought in 4,000 pounds in donated goods for the American-built schools and clinics. On CNN to discuss it in August 2003, he described a surprising bond with the villagers.

“If you had told me six months ago at this time I’d be sitting in Iraq, spending as much time as I have ... with Iraqi people, with the farmers, the children, and getting as close as we have to all of them, I would have told you you’re full of it,” Wellman said.

In an appearance on the news network the next month, he described Dr. Mohammad as “super human” for his tireless efforts both running an American-built clinic and serving on a local governing council.

With help from Iraqis like Dr. Mohammad, the division’s efforts seemed to be paying off by the end of 2003. Some 4,500 projects were launched, credited with staving off an insurgency already gripping Baghdad. The success propelled Petraeus’s career.

But the jihadi movement would eventually take root in the north, too. Like many others who accepted U.S. aid or sought to usher in democratic self-rule, several Iraqis who worked with Wellman and Rourke would be targeted — seen as traitors by the extremists.

Wellman’s translator, a Christian from Mosul, became one of the insurgency’s earliest victims in northern Iraq when he was kidnapped and beheaded in 2004. Rourke’s translator, a Muslim from west Mosul, has been on the run from insurgents ever since.

Dr. Mohammad lost his legs in a 2008 roadside bombing near Q-West. He would eventually return to assisting the Americans and treating locals in the clinic the troops built him, but almost immediately after the U.S. withdrew in 2011, militants posing as patients assassinated him in that same clinic.

When ISIS swept across the country in 2014, Wellman watched as ominous changes took shape on satellite imagery. After more than a year of ISIS occupation, he noticed vehicles and fresh ruts in the roads in neighboring villages, but Jaddalah showed no such signs of activity.

“All my folks are dead,” Wellman said of the Iraqis he’d worked with during three tours, in a February post on Twitter. “They got them all over time. … Funny, nobody cares about the Iraqis we lost. They were like family, but the topic never comes up.”

Though they bonded with the Americans, the people of Jaddalah hadn’t collaborated in military efforts to find, capture or kill the enemy, said Army Col. Rick Ullian, an artillery major at Q-West back in 2003. In the extremists’ warped mindset, though, that didn’t matter.

The question for Wellman, chief executive of a Washington communications firm now, wasn’t if the villagers suffered for those bonds, but to what extent.

“I’d give anything to go there right now,” he said in a March email, pondering their fates. “Recent Google Earth pictures make it look like my main village Jaddalah is abandoned.”

Soon, he’d hear the villagers hadn’t been displaced, but had been slaughtered. As is often true in Iraq, however, the first reports would be wrong.

Read Part Two: Thought to have been destroyed by ISIS, village aided by US soldiers has endured.