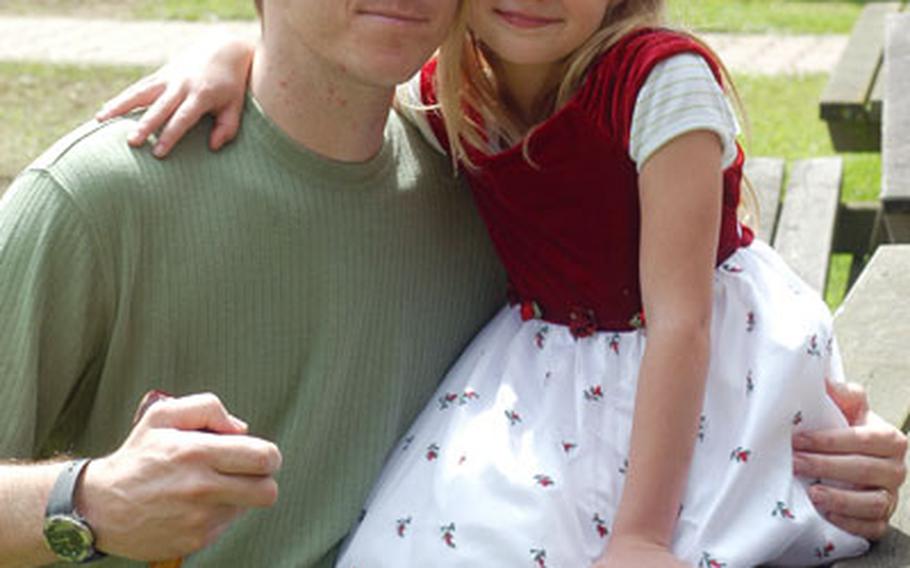 Sgt. Archie Hennessey, with his daughter, Summer, says he feels betrayed that the Army classified him as only 10 percent disabled after an on-duty back injury left him unable to walk without a cane, in frequent pain and wondering what his post-Army future will hold. (Nancy Montgomery / S&S)

HEIDELBERG, Germany &#8212; Sgt. Archie Hennessey was hoping that when they saw him and listened to him, things would be different.

&#8220;I thought to myself, once I met with the board and they see me as a real wounded soldier, not just a number on a piece of paper, the board would do the right thing and give me at least a 30 percent disability,&#8221; Hennessey wrote in a letter.

But the Physical Evaluation Board denied Hennessey&#8217;s appeal on July 31, and left him with a 10 percent disability rating. That discharges him from the Army for back pain and nerve damage with about $9,000 in severance pay. Hennessey said he deserves a 30 percent rating, which would entitle him to retirement benefits, including medical coverage and a disability check.

&#8220;The Army is not following the laws as they are written and there is no true standard of review. &#8230;,&#8221; Capt. Michael Shanahan wrote in an e-mail to Hennessey after the appeal hearing. &#8220;The appeal courts have said that the Army needs to follow their own rules, which is what they are not doing right now.

&#8220;If the Army doesn&#8217;t like their own rules they need to change them. Until then we are a rule of law country, and we follow the rules as written,&#8221; Shanahan wrote before suggesting Hennessey appeal the decision further.

Hennessey, 34, an investigator with the 66th Military Intelligence Group in Heidelberg, hurt his back last fall at Fort Bragg, N.C., shortly after arriving at a Special Forces Selection course. He and some 50 others were told to clear a length of rebar weighing thousands of pounds. The soldiers hoisted it to their shoulders, Hennessey said, but when a soldier in front of him tripped, Hennessey was crushed by the steel rods.

Previously fit, Hennessey now walks with a cane, sometimes can&#8217;t control his bladder or his leg, he says, and must take massive amounts of painkillers to get through the day.

After getting the 10 percent rating from an informal Physical Evaluation Board, he traveled to Walter Reed Army Medical Center to appeal the decision in front of a board of three Army officers, including a doctor and a personnel officer.

Shanahan told the board that an Army regulation provided that, because of neurological involvement in his injury, Hennessey should get a rating of between 40 percent and 60 percent disabled, at least temporarily, and with it, appropriate benefits.

But Hennessey said the board told him that its members were instructed to use a different policy guideline, and that it provided for the 10 percent rating. He said that one of the board members, a lieutenant colonel, even said he was distressed by the outcome.

Shari Lawrence, a spokeswoman for the Army Human Resources Command, said that she could not speak about Hennessey&#8217;s case, because of privacy laws, even if she knew the details of it.

Hennessey has one last appeal to the Army&#8217;s Physical Disability Agency, he said. But he isn&#8217;t optimistic.

After that, he said, he expects discharge papers and a return to civilian life within 90 days.

He and his family are moving to Tucson, Ariz., where Hennessey lived before deciding to make the military a career. He served just three years before the injury made him physically unfit to be a soldier &#8212; and he says, much of anything else.