Rugged beauty in a scarred land The Marble Mountains rise above the sandy countryside south of Da Nang. (Michael Kopp/Stars and Stripes)

The Marble Mountains rise above the sandy countryside south of Da Nang. (Michael Kopp/Stars and Stripes) Special Forces soldiers watch over the area from atop one of the Marble Mountains. (Michael Kopp/Stars and Stripes) 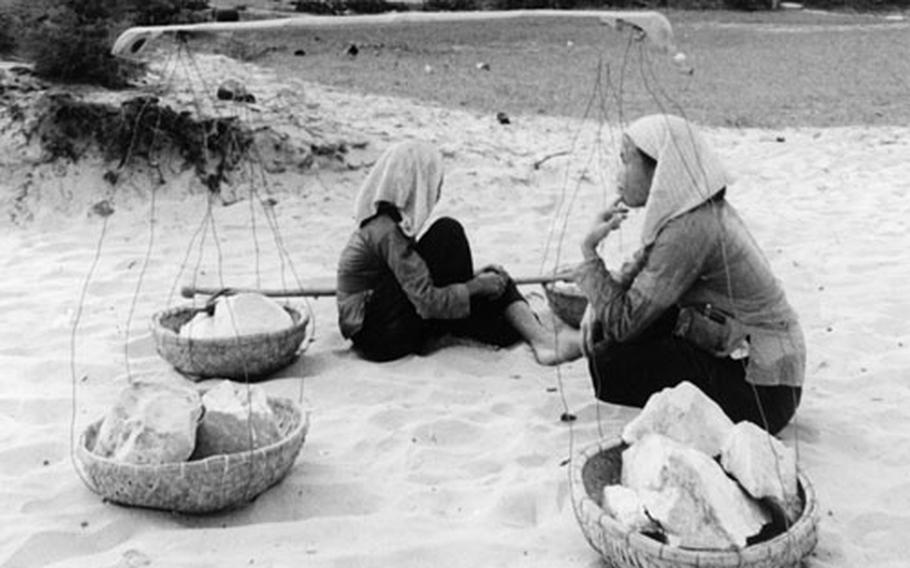 Two women take a break from carrying marble back to Da Nang. (Michael Kopp/Stars and Stripes) 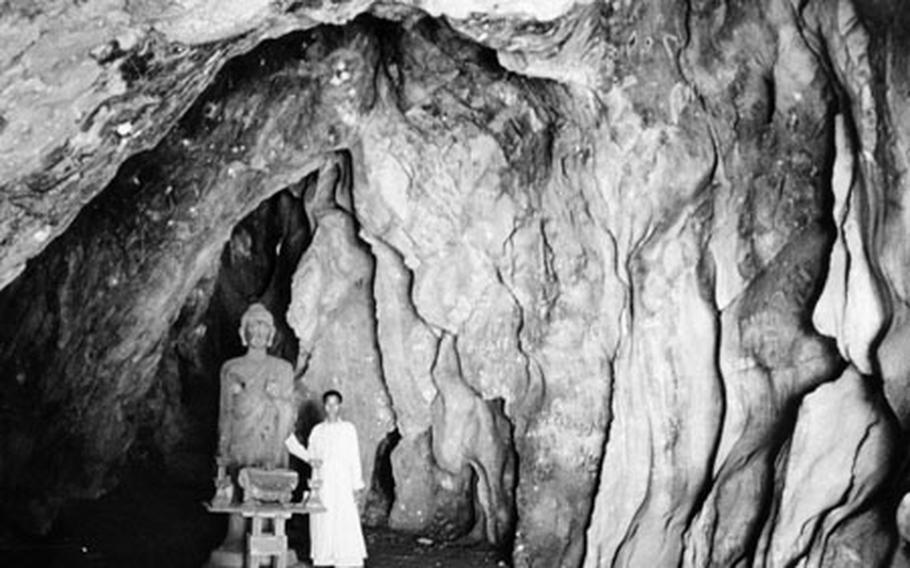 A monk stands beside a statue of Buddha in one of the mountains' many caves. (Michael Kopp/Stars and Stripes) A Vietnamese craftsman carves a chunk of marble carried down from the hills. (Michael Kopp/Stars and Stripes)

They rise out of the sandy South China Sea beach like warts on a toad. Their sheer walls are solid marble, fissured and honeycombed with the caves of time. The Marble Mountains, they are called: six peaks jutting out of the land near Da Nang, Vietnam, far south of any other marble formation.

Today Special Forces keep watch from the tops of three peaks and Marines camp at their bases. Viet Cong are also on the mountains, holed up in caves with their inexhaustible underground streams. VC move through the mountain villages at night, sometimes firing at allied positions, including an old French fort used by the South Vietnamese Army as a command post.

The villagers quarry the marble to make gravestones, desk nameplates and figurines which they sell along the streets of Da Nang. The marble is lacquered to look highly polished, and the buyers are mostly GIs. But in the villages, which are off-limits and patrolled by Marine MPs, they sell the marble without the lacquer, just as they chip it.

The Marble Mountains and the villages lie between the sea and the Can Bien River, a tributary of the Da Nang River, surrounded by rice paddies and small fields. Some of the villagers are farmers, living in the shadow of the peaks.

The Vietnamese Nature Protection Service is planning to make the Marble Mountains part of a series of national parks throughout the country. Two parks already exist — a small one near Bien Hoa and the huge 300 square mile Bach-Ma Hai-Van northwest of Da Nang. But both are scarred by the war, which has slowed progress towards creating other parks.

Through Director Nguyen Van Hiep, the NPS has made a start at preserving some of Vietnam's areas of wildness and beauty.

Someday — perhaps after the war — the six peaks called Marble Mountains will be a national park. When the litter of war can be removed from the fissures of the marble, when the barbed wire is gone from the beaches, these out-of-place marble monoliths will be preserved as part of Vietnam's natural heritage.