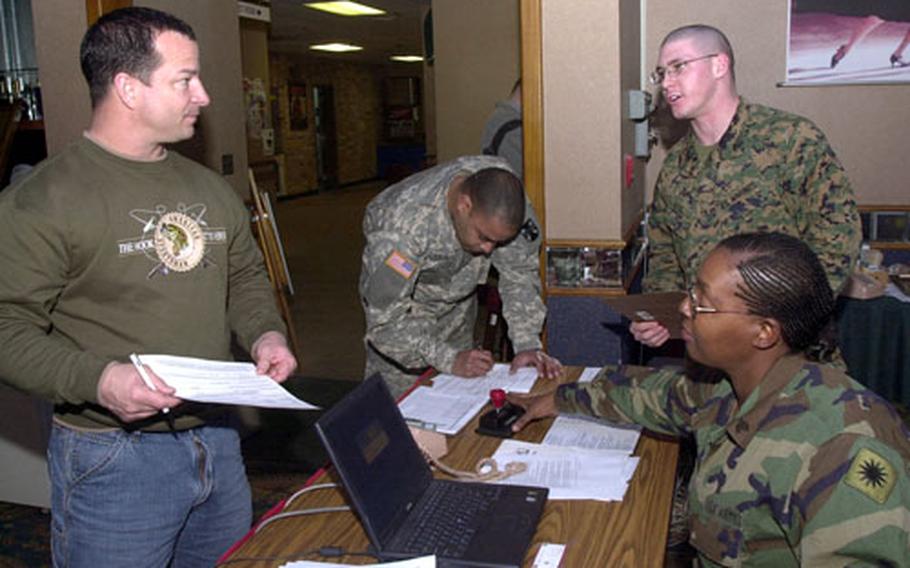 CAMP HENRY, South Korea &#8212; When 6,000 servicemembers show up by air and sea within a few weeks, planning will be the difference between a successful exercise and an international incident.

It may not be as glamorous as storming the beaches or blasting range targets, but servicemembers say real-world events have proven the importance of personnel planning and the peninsula&#8217;s three Joint Reception Centers.

Staff members on the peninsula and at higher headquarters held their first planning meeting for the upcoming Reception, Staging, Onward Movement and Integration exercise 10 months ago, said Lt. Col. Dave Scofield, joint personnel section deputy of plans and operations. The planning extended down to every servicemember involved in the exercise.

For the first time, each servicemember could log on to the U.S. Forces Korea Web site and enter his or her in-processing information. When he or she arrived at one of the reception centers, workers could pull up data instantly.

JRC workers said it takes about 30 to 45 minutes to process 100 servicemembers with the new system in place, a vast improvement over past exercises.

&#8220;The old way, it would take double the time than it does now,&#8221; said Sgt. Jannette McCoy of the California Army National Guard, who received servicemembers in two previous Ulchi Focus Lens exercises.

Servicemembers also use the Web to complete a 16-module briefing that includes policies on everything from drinking and sexual harassment policy to Korean culture and customs.

While servicemembers fill out paper copies of their essential information as a backup, possessing that advance Web information enables the JRCs to move large numbers to their sponsor units even quicker than in the past.

Most servicemembers fly into Incheon International Airport near Seoul on commercial planes, then take buses provided by the 25th Transportation Company.

Even with all of those plans in place, there are times when large groups show up at unexpected times. That could mean a relatively small group of personnel workers must coordinate movement for 200 travel-weary servicemembers as quickly and harmoniously as possible.

&#8220;You get this rush of adrenaline or whatever you need to stand up and get the job done,&#8221; said the Camp Henry JRC&#8217;s Marine Cpl. Raymond Cate from Camp Pendleton, Calif.

&#8220;This is customer service, and no matter what the question is, you try to answer it,&#8221; said Maj. Nick Mullen, operations officer for joint personnel section plans and operations. After a 12-hour flight in many cases, &#8220;you&#8217;re the first friendly American face folks on the peninsula see.&#8221;

JRC workers also are the last to pack up after out-processing all servicemembers, Mullen said.

Manning JRCs are soldiers from the California Army National Guard&#8217;s 49th Personnel Service Battalion; active-duty soldiers from the 2nd Infantry Division and other South Korea-based units; airmen from Osan and Kunsan Air Bases; and Marines and sailors from Pacific Command and stateside.

Besides ensuring that missions go off as planned, getting personnel accountability right at exercises like RSOI also is excellent training for those who may end up working in combat zones.