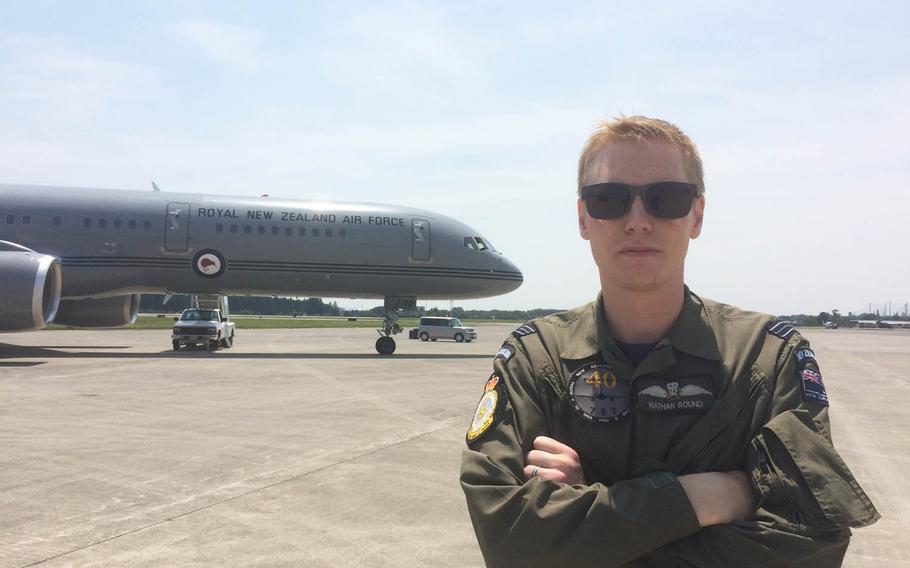 Flight Lt. Nathan Round, 30, of Auckland, New Zealand, was part of a Royal New Zealand Air Force Boeing 757 crew who stopped off at Yokota Air Base, Japan, this week to transport Australian military personnel, who are meeting counterparts in the region. (Seth Robson/Stars and Stripes)

YOKOTA AIR BASE, Japan — Kiwis were spotted at Yokota this week.

The Kiwis, as New Zealanders call themselves, flew into the U.S. air base west of Tokyo on Monday aboard a No. 40 Squadron, Royal New Zealand Air Force Boeing 757 cargo/passenger plane.

They were transporting students from the Australian Defence Force’s Strategic Defence Command College, who are meeting counterparts in the region. On Thursday, the group was headed to South Korea and then to Guam, said Flight Lt. Nathan Round, 30, a No. 40 Squadron crewmember from Auckland.

The squadron, which also operates C-130 Hercules transports similar to those with Yokota’s 374th Airlift Wing, flies regular missions over Southeast Asia, the South Pacific and Australia. Its aircraft support New Zealand research operations at Scott Base, Antarctica, and participated in the Red Flag-Alaska exercise earlier this year, Round said.

However, the squadron’s planes don’t often travel as far north as Japan.