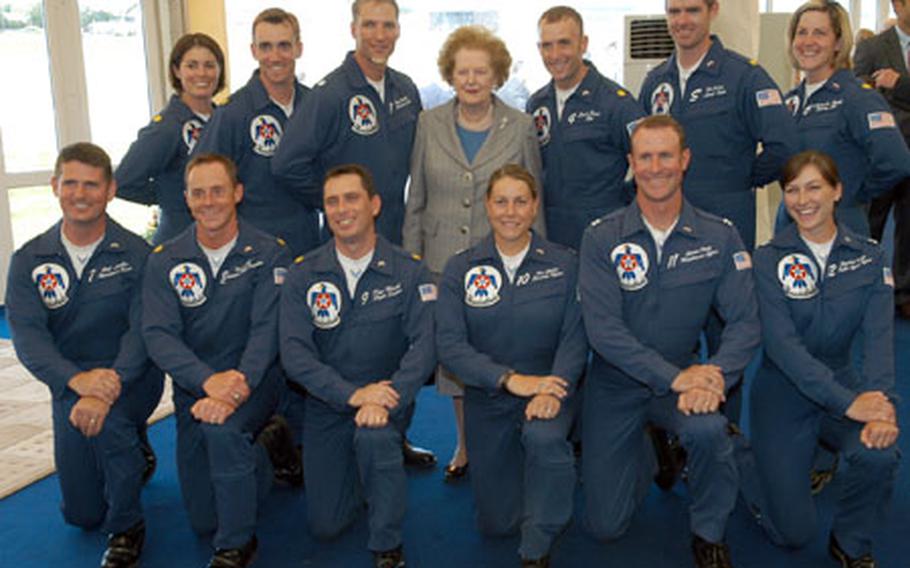 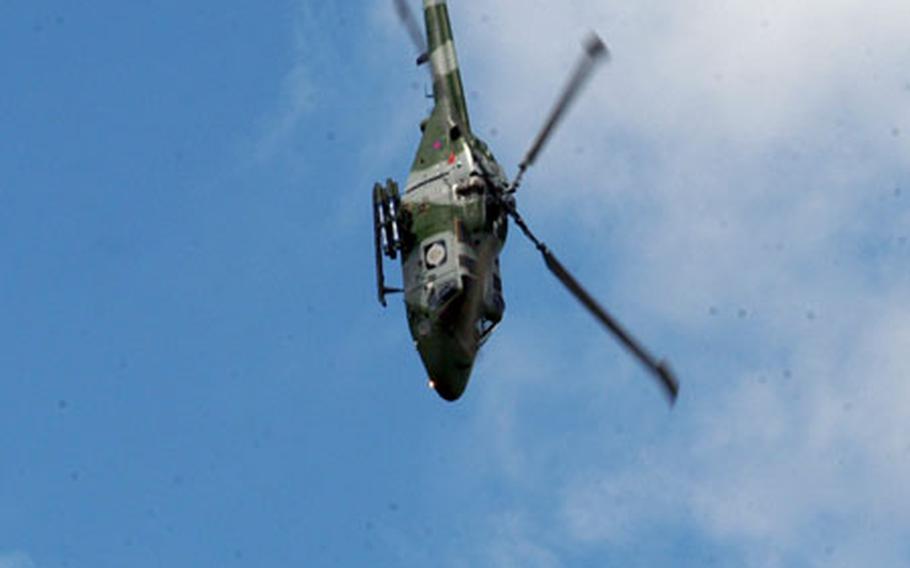 A Royal Army Air Corps Lynx helicopter takes a nose dive as part of its aerobatic display in the Royal International Air Tattoo Saturday. Nearly 270 aircraft from 24 countries were slated to attend the annual air show at RAF Fairford. () 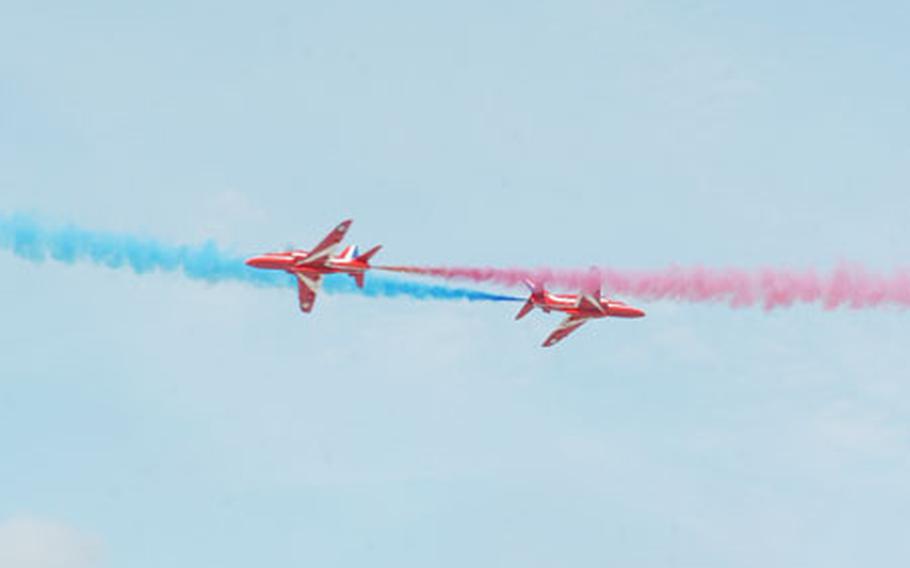 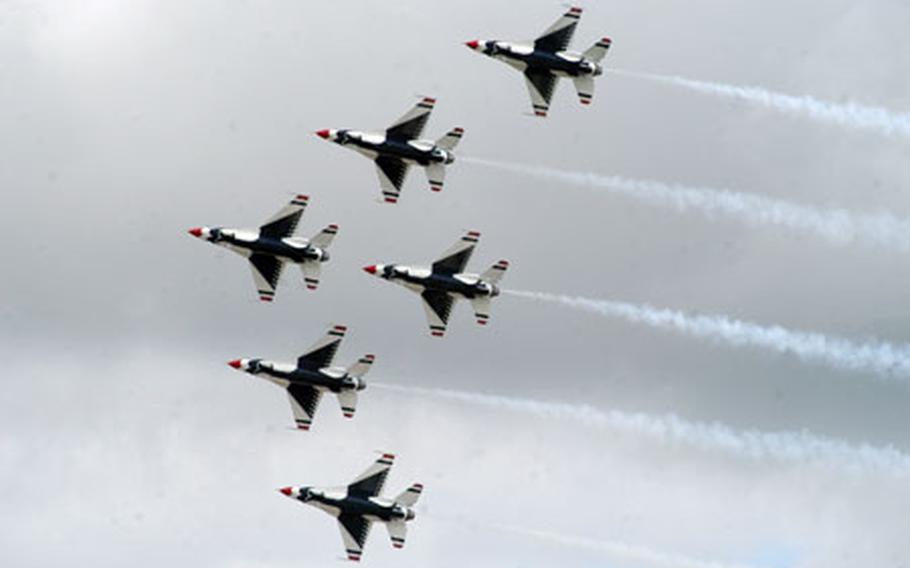 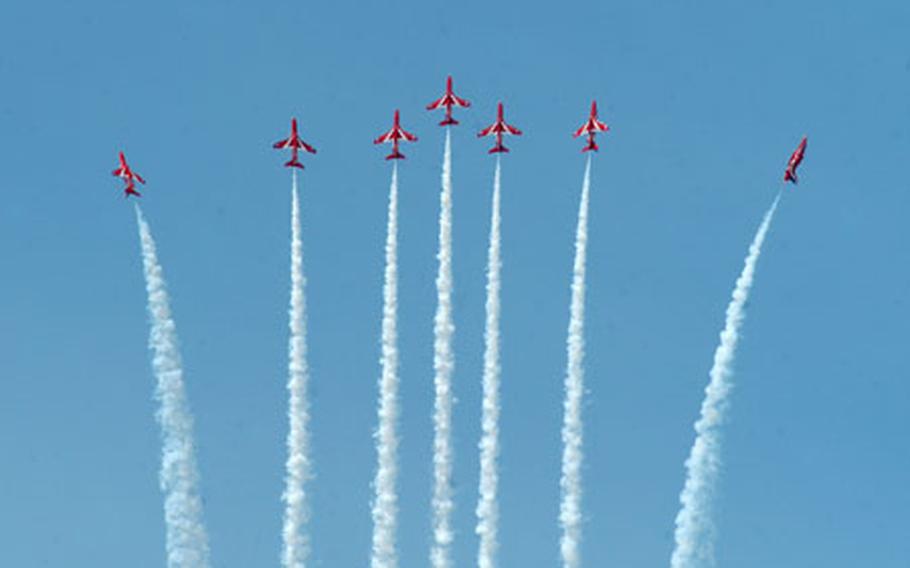 The Royal Air Force Red Arrows put on a spectacle with white smoke as they dart straight up into the air during this year&#39;s Royal International Air Tattoo. (Sean Kimmons / S&S)

RAF FAIRFORD &#8212; It&#8217;s been about a century since the Wright brothers first took mankind&#8217;s feet off the ground in an airplane, so what&#8217;s with the continued aviation fixation?

With so many flights to every corner of the world each day, it would seem that the human race has conquered the air. Planes can be so ho-hum.

Then again, not everyone&#8217;s seen England&#8217;s Royal Air Force aerobatic team, known as the Red Arrows, effortlessly soar thousands of feet above ground in their Hawk T1A jets, spewing colored smoke, fading behind clouds and moving in ways most of us could never experience nor imagine.

Flying can take on an even newer face when a Lynx helicopter executes a back flip and dives toward the earth, pulling up in a way that would make a novice fear the chopper was going to crack in two.

That&#8217;s what the 2007 Royal International Air Tattoo was all about last weekend at RAF Fairford. All eyes were to the skies as more than 150,000 expected enthusiasts celebrated all things aviation.

Besides endless hours of breathtaking aerial acrobatics performed by flight crews from around the globe, the RIAT also has a state fair feel to it, with aircraft on display, rides for the kids and a host of booths hawking all types of wares.

&#8220;They fascinate me, the different shapes and sizes,&#8221; said Dennis Belbin, an English aircraft buff who&#8217;s attended the RIAT for more years than he can remember. His first impression of aircraft was the battling fighters over England during World War II. &#8220;Sometimes you think they&#8217;d never get off the ground, and then they do.&#8221;

Air Force 1st Lt. Matt Summey of Ramstein&#8217;s 76th Airlift Squadron was in self-described &#8220;plane dork&#8221; heaven Saturday as he checked out aircraft from all over, including a Brazilian C-130 that had salsa music pulsating from the cargo hold and an Indian air force Sukhoi Su-30MKI fighter jet.

Summey eagerly pointed out the unique thrust vectoring on the jet, which lets it land on dirt roads or other nontraditional landing strips.

Despite their countries of origin, pilots being able to talk shop go a long way toward mutual understanding, Summey said.

Air power is an important part of India&#8217;s military now and in the future, he said.

Nearly 270 aircraft from 24 countries made the journey to the 2007 RIAT. The 2003 show included 535 aircraft, leading the Guinness Book of World Records to declare it the world&#8217;s largest air show.

The air displays ran about eight hours each day and featured everything from old-school propeller aircraft to fighter jets that seemed to be cutting the sky as they roared by. One of the rare treats for visitors on Saturday was a show by the legendary Air Force Thunderbirds.

Maj. Tad Clark, an F-16C Fighting Falcon pilot who was stationed at Spangdahlem Air Base in Germany before joining the Thunderbirds, said that he doesn&#8217;t really get nervous or intimidated when soaring the skies, as thousands &#8220;ooh&#8221; and &#8220;aah&#8221; below.

Despite the high caliber of the air teams at the show, Clark said there&#8217;s not much competition between the crews.