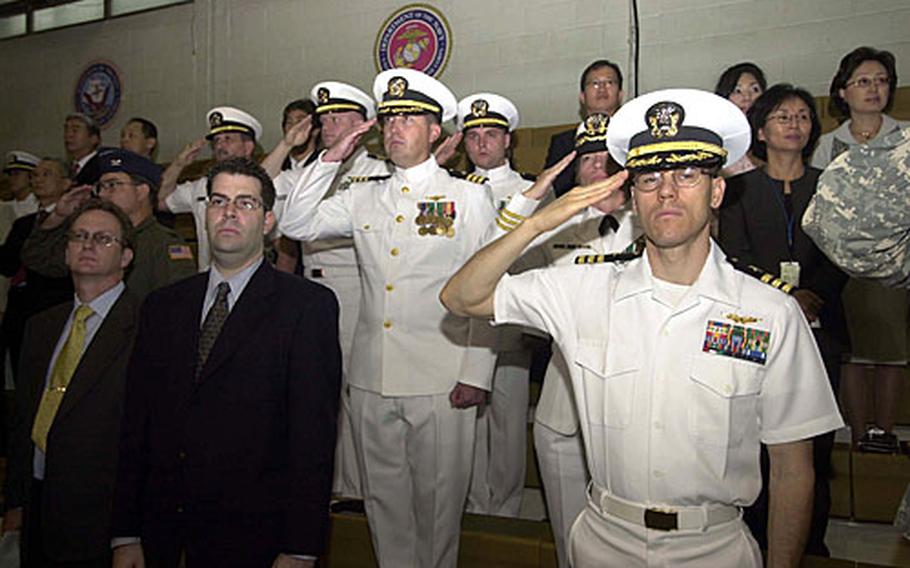 Military members salute during the singing of the National Anthem during the U.S. Naval Forces Korea change of command ceremony on at Yongsan Garrison. (T.D. Flack / S&S)

He explained the ceremony is a time-honored Naval tradition and that, &#8220;I will, as they say, stand relieved&#8221; after the ceremony.

He told the sailors in attendance that they represented the &#8220;strength, commitment and readiness&#8221; of the U.S. Navy and told them that Wisecup &#8220;deftly led from the bridge&#8221; during his two-year tour as the senior U.S. naval officer in South Korea.

Bell praised Wisecup&#8217;s strategic vision in the midst of a changing U.S.-South Korea military relationship and said his work with the missions, functions and tasks was important.

&#8220;The alliance is going to miss you,&#8221; he said, calling Wisecup an outstanding officer and friend.

Bell also welcomed Rowden, who comes to South Korea follwing a tour as the commander of the Surface Warfare Officers School Command in Newport, R.I.

Bell said Rowden&#8217;s extensive deployment experience will be beneficial to his duties here.

&#8220;It&#8217;s great to be back in your fine country,&#8221; Rowden said during a brief speech. He explained that he had visited Busan once during a port call and that he was looking forward to returning and working in the joint- and combined-military environment.

He also stressed he believes national security is inextricably linked to maritime security and looks forward to working with his South Korean counterparts.

The native of Washington, D.C. is a 1982 Naval Academy graduate.

His sea assignments include duty on cruisers, destroyers and aircraft carriers in both the Atlantic and Pacific. He has deployed to the Arabian Gulf, Western Pacific, Mediterranean Sea, Indian Ocean, Black Sea and Gulf of Guinea.

He has served in various shore positions, including as the Theater Missile and Air Defense Branch Head for the Director of Navy Missile Defense and as the Executive Assistant to the Director of Surface Warfare.

His most recent assignment was as the commander of the Surface Warfare Officers School Command in Newport, R.I.

He earned his Masters of Arts in National Security and Strategic Studies from the U.S. Naval War College and his decorations include the Legion of Merit, the Meritorious Service Medal, the Navy Commendation Medal, Navy Achievement Medal and other personal, unit and campaign awards. He is a joint-specialty officer.

He is joined South Korea by his wife, Susan, and sons, John, Jack and Nicholas.