Routing out the Taliban through talks 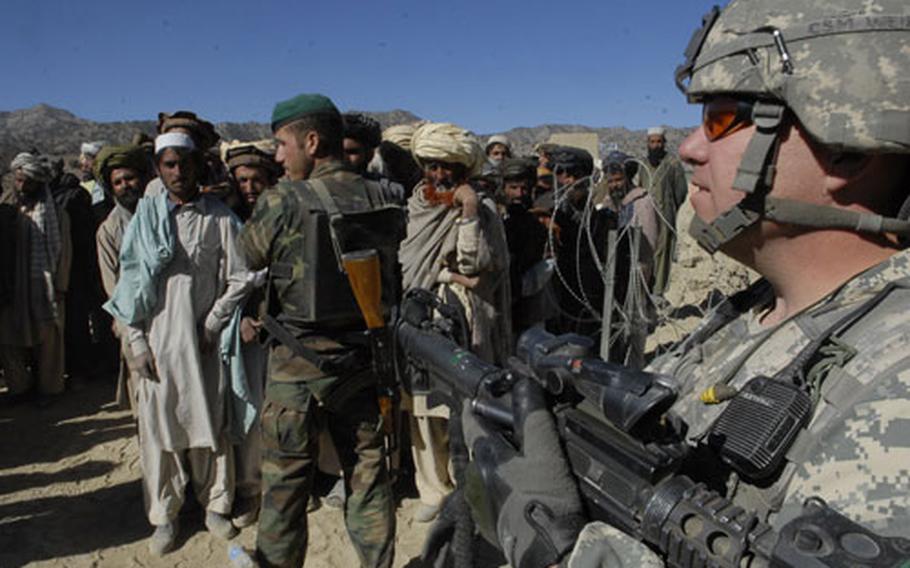 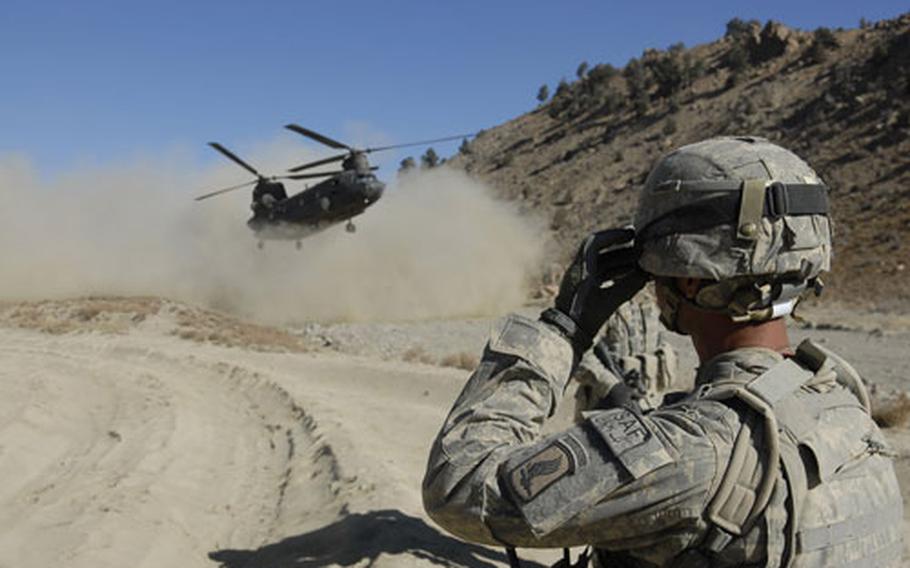 A soldier with the 173rd Airborne Brigade watches as a U.S. Army Chinook helicopter carrying Afghan national legislators touches down near a meeting in the rugged country’s eastern mountains. The shura, as it is called, was attended by Afghan mullahs, imams, parliamentarians and Paktika provincial leaders. Security was heavy, with more than 20 U.S. Army snipers posted on the mountaintops surrounding the meeting. (Les Neuhaus / S&S) 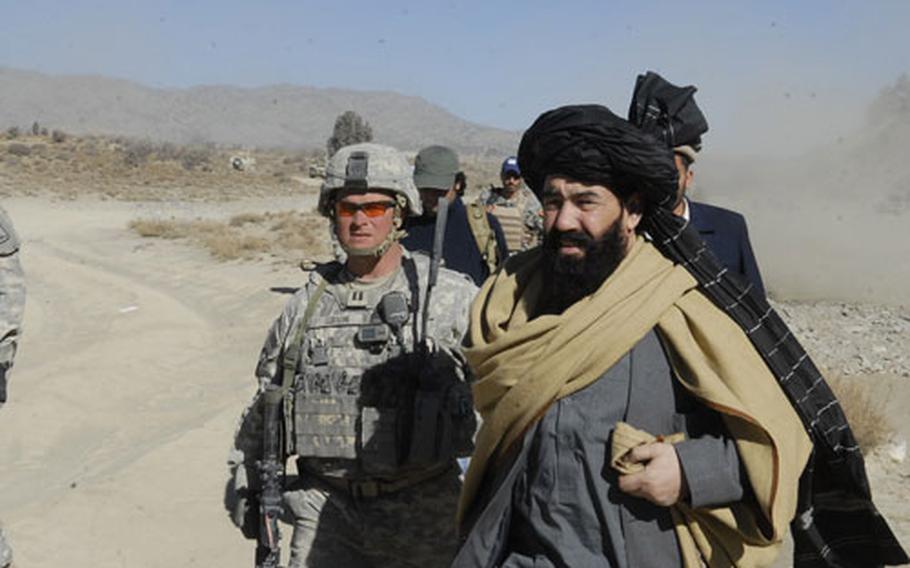 PAKTIKA PROVINCE, Afghanistan &#8212; As a three-week Afghan-led sweep of Taliban forces wrapped up in the country&#8217;s east on Sunday, U.S. military leaders and Afghan officials sat down with civilians to discuss snuffing out insurgent influence in the area.

Gibson said that many villagers in the area had told him that some Taliban lurking in the district had run away to neighboring Khost province, or even Pakistan, which continually serves as a thoroughfare for insurgents coming and going to Afghanistan&#8217;s restive southern quarters. Both Khost and Paktika provinces border Pakistan.

At the meeting, mullahs, imams, parliamentarians and provincial leaders took turns speaking, repeating their pleas for the citizenry to stand up to Taliban influence.

&#8220;The Taliban can&#8217;t stay here unless someone is helping them, and they are getting help,&#8221; Afghan parliamentarian Khaled Farouqi said over a microphone to the elders, who were huddled under large tents. Farouqi represents portions of Paktika.

American military officials are hoping Afghan residents living in Charbaron are ready to cooperate with them and stop supporting the Taliban.

After that comes more development projects, Farouqi said. It&#8217;s a classic baiting technique, but U.S. military officials are banking on it working.

Dancing Afghan men is a sign that it could work. Under the Taliban, there was no dancing. Central government officials from the capital, Kabul, are reaching out to the once-abandoned rural areas.

National officials want stability so that development dollars will flow to those needing it the most in the areas they represent.

&#8220;This is government in action, at the local level,&#8221; said Col. Martin Schweitzer, commander of the 82nd Airborne Division&#8217;s 4th Brigade, from the sidelines of the conference.

Schweitzer was asked to sit with the Afghan VIPs front and center, but politely declined. It is part of his continuing bid to push attention on to the Afghans themselves, so that the U.S. military can step back, and start letting the Afghans step up.

The 1st Battalion, 503rd Infantry Regiment, a 173rd unit, serves under his command. The men of the 503rd, normally based in Italy, undertook much of the responsibilities for the U.S. in Operation Attal.

At the shura, U.S. Air Force jet fighters screamed low above dancing Afghans kicking up dust as others beat drums. The mood seemed upbeat, even though more than 20 snipers were perched on ridge tops surrounding the heavily fortified tent complex set up for the conference.

Though 2007 has been the deadliest year for U.S. forces in Afghanistan since the 2001 invasion, commanders remain focused on the long-term goals.

&#8220;This shura represents the passion for nationalism that Afghans have in their country,&#8221; said Lt. Col. Michael Fenzel, 40, from the meeting.

The U.S. Army&#8217;s provincial reconstruction program has helped fund the rebuilding of the center, claiming that this time will be the last time it is brought back from the ashes. They have moved in forces until a new Afghan police unit totaling 35 to 40 men can be brought in to reclaim the area on their own.

But the police will need help, say officials.

In an area that has been essentially lawless, coalition forces want security established.

No police outpost previously existed in Charbaron, and the barren hills served as a staging area for the Taliban for operations into other areas of the province, U.S. military and Afghan officials said.