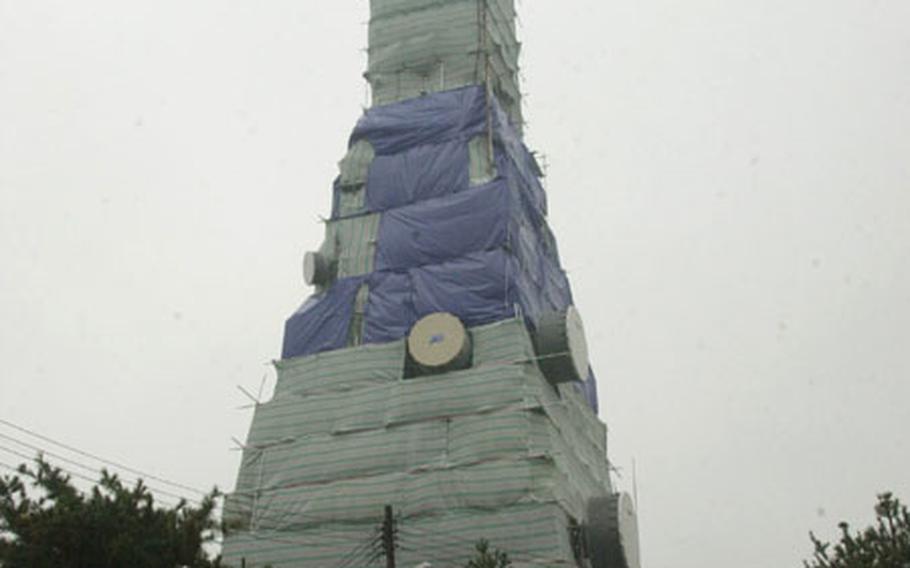 While the microwave relay tower at Camp Morse is being repainted, American Forces Network&#39;s FM station in Area II will be off the air. (Joseph Giordono / S&S)

YONGSAN GARRISON, South Korea &#8212; Unless you like the oldies or country music, better pack some extra tapes in your car.

Scheduled maintenance on a microwave relay tower atop Namsan Park largely has knocked the American Forces Network&#8217;s FM broadcast off the air in Areas II and III until Nov. 7, officials said Wednesday. Between roughly 5 a.m. and 6 p.m., listeners in Seoul, Osan Air Base, Camp Humphreys and Songnam will hear nothing but static.

&#8220;Basically, we can&#8217;t have workers up there with the microwave broadcasts, so we&#8217;re shutting down the relay during the times when people are working on the tower,&#8221; said Army Capt. Rosa Sanchez, commander of the 275th Signal Company, which maintains the site.

Now the relay tower sits swathed in plastic coating, while workers paint the structure and do other routine maintenance to its control systems. The tower is the centerpiece of a tiny American installation called Camp Morse.

The camp sits in the shadow of the much larger Seoul Tower, up a leafy street in Namsan Park. At any given time, Sanchez said, four South Korean technicians and four U.S. military signal soldiers are working and living at Camp Morse.

Preparations for the maintenance project began in early September with the construction of the scaffolding, according to Alex Harrington, a 1st Signal Brigade spokesman. Actual paint removal began Wednesday.

While officials did not have a specific cost for the current tower repairs, they did say the contract for painting some 15 towers throughout Korea is more than $500,000.

The work will not affect AFN broadcasts in any other part of the peninsula, said Harrington.

AFN also broadcasts AM stations in South Korea that are a mix of talk radio, oldies and country music. For the past few weeks, that station has been broadcasting the Major League Baseball playoffs and World Series in addition to music.

Neither AM stations nor AFN Korea television broadcasts are affected by the work.