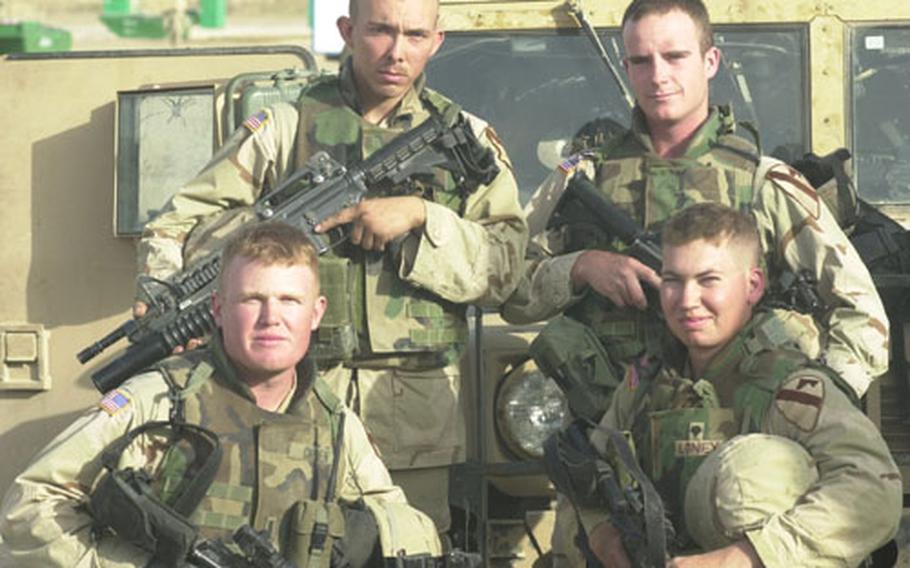 Scouts say that plain hard work, especially random traffic stops, can net crucial intelligence on the enemy. His soldiers, says 1st Lt. Rich Groen, front row left, have found everything from IEDs to lists of terrorist leaders complete with addresses. Next to Groen is Spc. Robert Loney. In the back row are Pvt. Anthony Ventura, left, and Pvt. Jacob Hounshell. (Terry Boyd / S&S)

Much of the time, big intelligence scores come from working hard, not from spy-novel intrigue.

During random stops that soldiers call &#8220;snap TCPs,&#8221; for traffic control points, soldiers from Troop D stopped a car in a northwest suburb of Baghdad.

Inside the car, Pvt. Anthony Ventura, a Humvee driver, spotted a printout of material that looked like it was off the Internet, Groen said.

The unit&#8217;s interpreter pretended to be an Arabic-speaking American who couldn&#8217;t read Arabic and ask the suspect for translating help, Groen said.

Bingo. A search of the taxi turned up money, anti-coalition materials, extremist Wahabi tapes from Saudi Arabia, money and a notebook. The notebook alone was a gold mine, with names and addresses for heads of anti-coalition cells in Abu Ghraib, as well as four Iraqis that division intelligence officers had been pursuing.

But it wasn&#8217;t until they got the suspect to 29 Palms, the 2nd Brigade detention center, that they found another vital clue &#8212; a pamphlet with photos of masked insurgents and a list of strikes against soldiers during the month of April.

The man, who Groen said was afraid he was going to be killed instead of detained, spilled everything. How he got the pamphlet from a masked man outside a mosque in the Ameriyah neighborhood, near the 1st Cav&#8217;s Camp Black Jack.

During another TCP about the same time, scouts Spc. Robert Loney and Pvt. Jacob Hounshell, with 1st Platoon, stopped one of the ubiquitous orange and white taxis. In the trunk were two makeshift bombs complete with 155 mm artillery shells fuse, blasting cap and command wire, as well as six handwritten orders &#8212; instructions where to hit next, Groen said.

Groen said the most effective counter-insurgency measures are a combined effort of aviation surveillance, constant scout surveillance and traffic stops.

His soldiers made those finds &#8220;just because 1st Platoon had attention to detail, taking a look at things that look minor to us, then letting translators look. Knowing what to look for, knowing to pick out suspicious materials.