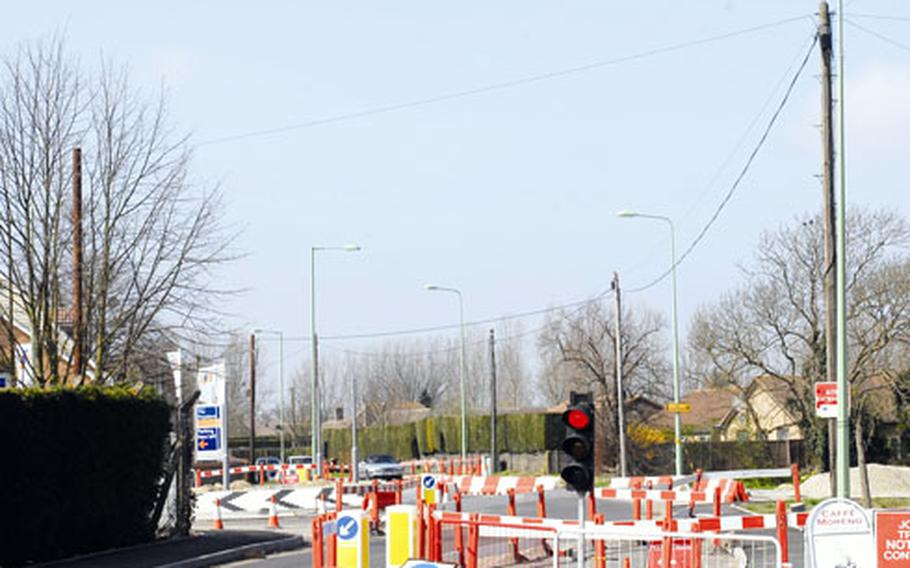 Work on the A1101 roundabout near RAF Mildenhall’s Lincoln Gate has come to a standstill because of a design problem. Work on the roundabout is scheduled to resume April 14. (Photos by Mark Abramson/Stars and Stripes)

Work on the A1101 roundabout near RAF Mildenhall’s Lincoln Gate has come to a standstill because of a design problem. Work on the roundabout is scheduled to resume April 14. (Photos by Mark Abramson/Stars and Stripes) After months of delay, road work that has brought two-way traffic on the A1101 roundabout just outside RAF Mildenhall&#8217;s Lincoln Gate to a screeching halt is about to resume.

The project and a design snafu in its engineering has resulted in traffic lights being posted outside the roundabout near the Bird In Hand pub and restaurant to allow traffic to travel in only one direction at a time. That restriction at times creates a bottleneck just outside RAF Mildenhall that can cause backups all the way on base and delays for anyone who has to head that way.

The work by the George Wimpey home building company started in October and stopped shortly after that when the design problem became apparent. The roundabout is being built to mitigate traffic for a planned 26-house development nearby.

"Vehicles were having difficulty maneuvering around the roundabout and we had to make minor alterations, and that meant moving part of the road," said Sandra Graffham, a spokeswoman for the Suffolk County Council.

The work is not starting until April 14 because of the British bank holiday after Easter, she said.

County officials and a spokesman for the George Wimpey company declined to elaborate on what the design problem was and they would not disclose how long work on the roundabout would take.

RAF Mildenhall officials admitted that the road work causes delays at times for people leaving the base at that time, but they pointed out that another gate, the St. John Gate near the Air Force Security Forces building, is open at peak times, like lunch time and when airmen get off work.

"We have an alternative gate that is open, which would allow people to bypass that roundabout completely," RAF Mildenhall public affairs spokesman Master Sgt. Charles Tubbs said.

"There are those who will take the normal Lincoln Gate (by the Bird In Hand). If you choose to go that way you could get caught in that traffic," Tubbs said.

Residents in Beck Row said they are unhappy with the situation.

"Everyone is complaining. The shops are losing business," said Tony Molloy, an unofficial spokesman for the residents. "I think it is slowing up people getting to work. It&#8217;s going on six months [since the work started].