Round 2 in Libya showcases AFRICOM's growth 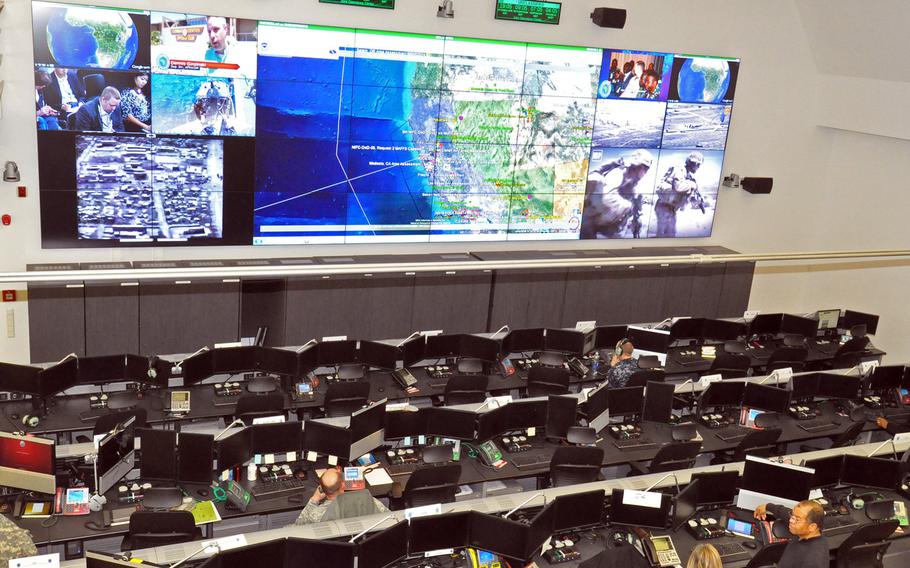 At U.S. Africa Command headquarters in Stuttgart, Germany, a new joint operations center is serving as the hub for AFRICOM command and control efforts in Libya and across the continent. The center became operational in late 2015 and was designed to improve AFRICOM leaders' situational awareness and decision-making capabilities. (Photo courtesy U.S. Africa Command )

At U.S. Africa Command headquarters in Stuttgart, Germany, a new joint operations center is serving as the hub for AFRICOM command and control efforts in Libya and across the continent. The center became operational in late 2015 and was designed to improve AFRICOM leaders' situational awareness and decision-making capabilities. (Photo courtesy U.S. Africa Command ) 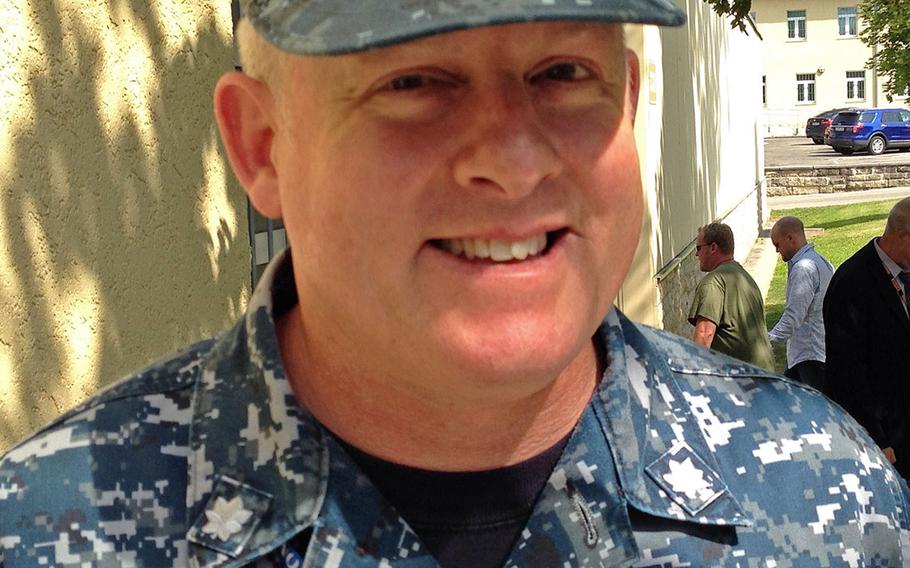 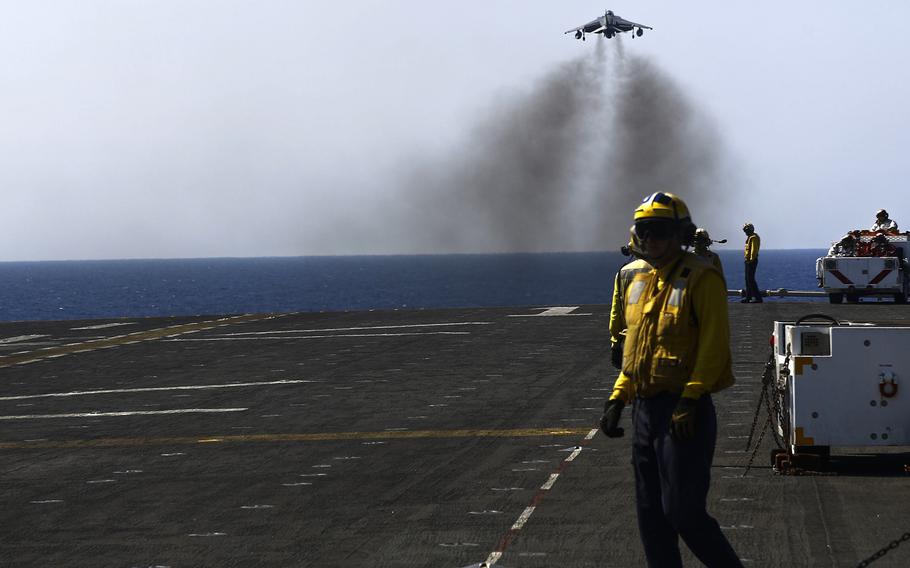 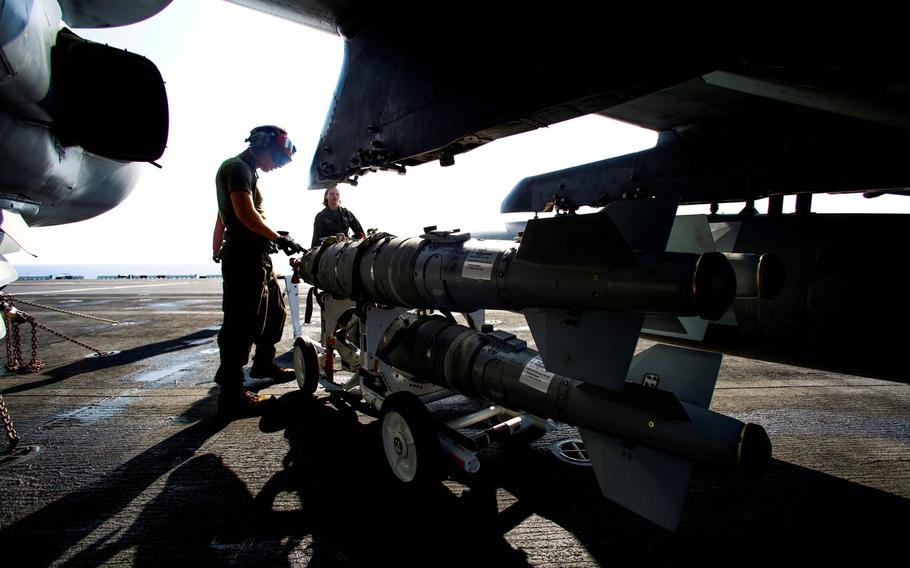 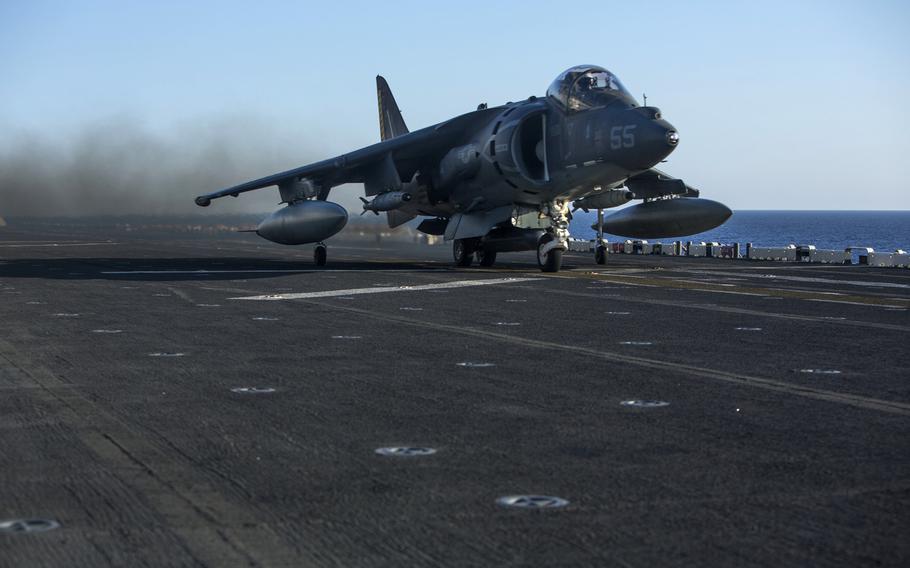 STUTTGART, Germany — They call it the “Great Wall of Kelley Barracks.” This giant screen of beamed satellite imagery and moving targets serves as the nerve center for U.S. Africa Command as it tallies a growing number of airstrikes against the Islamic State group in Libya.

The “wall,” part of AFRICOM’s new Joint Operations Center, is the round-the-clock hub for the Pentagon’s expanding mission against the militants in Libya, where 57 U.S. attacks have struck targets during the past two weeks.

The high-tech operations center is a sign of how AFRICOM, the military’s youngest combatant command, has transformed itself in the past five years — how it has adapted since its first major operation and its crucial capability gaps.

“In the past, AFRICOM had difficulty sustaining 24/7 operations. Now we can do that,” said Cmdr. Joseph Ring, director of the operations center. “This command has grown in scope, size, mission, in its campaigns and response to crisis. It is all part of the evolving threat of transnational terrorism.”

After-action analyses of AFRICOM’s role in 2011’s Operation Odyssey Dawn found that the command had too few targeting analysts and a command structure that made it difficult to stand up a 24-hour JOC.

The U.S.-led NATO intervention in the civil war in Libya helped depose that country’s longtime strongman, Moammar Gadhafi. It also turned Africa’s wealthiest nation into a failed state, with a weak central authority and a bewildering array of tribal, criminal militias and Islamist militias, including the Islamic State group.

Formed in 2007, AFRICOM was touted as a new type of command, one heavy on humanitarian-style missions but not designed to conduct traditional combat operations.

As a result, AFRICOM lacked the structure to lead in a fight, with insufficient systems for delivering orders to staff and poor network capability to ensure secure communications. Those shortcomings put the mission commander at a disadvantage.

Now, military officials say those gaps have been fixed, and the new capabilities are on display in the latest military mission in Libya — Operation Odyssey Lightning — which is delivering airpower support to ground forces aligned with the Libyan government in the effort to drive out Islamic State fighters from the coastal stronghold of Sirte.

Today, AFRICOM operates with the same operational picture as its subordinate commands, including U.S. Navy Forces Africa, which is conducting strikes in Libya from the Mediterranean. On a typical strike, the Navy will connect with the operations center to inform AFRICOM of a pending attack window and discuss the targeting criteria.

“They will share with us the rules of engagement that allow that strike, who this is in support of, who the target is,” Ring said.

The mission’s rules of engagement require strikes to be in and around Sirte, the site of the ongoing offensive, and must be at the request of Libyan authorities. If a strike request is made to target beyond the specified geographic area, Ring’s team must call AFRICOM’s commander, Gen. Thomas Waldhauser, for approval.

Three-dimensional maps, live feeds and a mix of data would be pulled to give Waldhauser the best information.

The plans for the new JOC date just before the initial 2011 operation in Libya, when AFRICOM’s first commander, Gen. William E. Ward, pushed for more command and control capabilities. During Gen. David Rodriguez’s recent tenure at AFRICOM’S helm, that idea was put into action, and the center became operational in late 2015, replacing the previous facility housed in the post’s old chapel building.

Waldhauser, who assumed leadership in July, is the first commander to have a state-of-the-art operations center from day one. He can connect to his headquarters at all hours from anywhere, to get a clear operational picture.

“What this does is provide decision-quality situational awareness,” said Ring. “He [Waldhauser] can walk in at any time, and he does. We can broadcast to his aircraft or an office in the Pentagon.”

The operational center is housed in a nondescript concrete box of a building on the low-key Kelley Barracks, just around the corner from the base commissary and across the street from a kebab vendor. Suited civilian staff are nearly as commonplace here as uniformed troops.

The JOC serves as the command’s eyes and ears not only in Libya but across the African continent.

While the Libya mission is currently its main effort, the $28 million facility gives a picture of key hot spots, from Nigeria in the west to Somalia on the volatile eastern Horn of Africa. Analysts also keep an eye on other areas of concern, including South Sudan, which has been the scene of a civil war since 2013.

On an average day, nine personnel man the center around the clock, processing up to 1,000 emails a day, about a hundred phone calls and queries from leaders at the Pentagon and the White House. When a crisis flares, such as the recent hostilities in South Sudan that put the U.S. Embassy in Juba on high alert, the center kicks into overdrive, filling up the 50 seats in the JOC’s main situation room .

Ring, whose two-year tenure at JOC’s helm ends Friday, is poised for promotion and will command a squadron of destroyers based at Pearl Harbor.

His promotion, Ring said, like those of several other JOC personnel who are slated for coveted commands at sea, is a sign of how the AFRICOM mission has been elevated from backwater to proving ground.

“Eight years ago, it was, ‘Oh, you’re going to be military tourist in Germany?’ Now people are standing in line to come to AFRICOM. Now it’s career-enhancing,” he said.