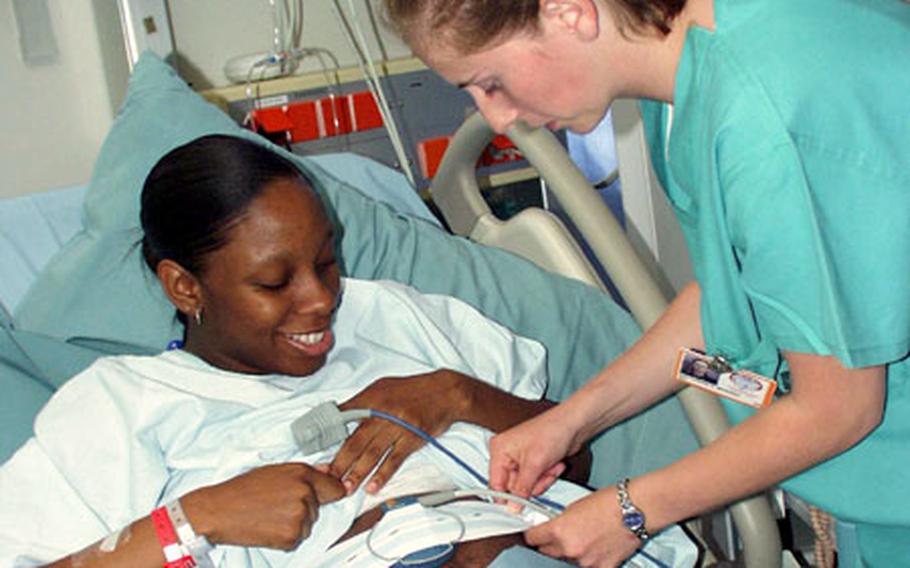 LANDSTUHL, Germany &#8212; Eight nursing neophytes are learning firsthand what it&#8217;s like to work in a major military hospital during a hands-on month at Landstuhl Regional Medical Center.

The Army ROTC Nurse Summer Training Program takes third-year nursing students from the United States, pairs them with a mentor and runs them through the paces of patient care and administration, said 1st Lt. Michelle Sanders, who oversees the program at Landstuhl.

The cadets, all females this year, were chosen in a competitive selection process that ends in placement at a real Army medical center.

All are on Army ROTC scholarships and, if accepted into the officer corps, will have an eight-year obligation of military service after they get out of school.

The students at Landstuhl have the benefit of working at the largest military medical center overseas &#8212; and one in the middle of treating hundreds of patients a day from real-world missions in Afghanistan and Iraq.

Cadet Carrie Bowden&#8217;s first work day started Tuesday with a 12-hour shift at the hospital&#8217;s labor-and-delivery ward. Before the war kicked up the pace at other contingency wards, the maternity ward was the busiest at Landstuhl. An average of three babies a day are born at the hospital.

Bowden, 21, of Bassett, Va., got a taste of that Tuesday. By noon she&#8217;d already helped deliver two babies and was treating another mother who was having difficulties.

&#8220;It&#8217;s been hectic,&#8221; Bowden said. In between those duties, mentor Capt. Shannon Mess was training Bowden on how to deal with various types of maternity patients.

Mess, 26, of Battle Lake, Minn., said the summer training program helps give the cadets a taste of the varied nature of nursing.

Plus, the cadets will experience work in other hospital wards and will visit the 212th Mobile Army Surgical Hospital to see what a field hospital is like, Sanders, 37, said. The students also will take a trip to Verdun, France, to visit the World War I memorial.

&#8220;They&#8217;re going to get an experience that many permanent active-duty medical personnel never get,&#8221; Sanders, a Detroit native, said.

It&#8217;s not all work, though. Bowden already visited Heidelberg and plans other weekend trips to make her Europe experience complete.