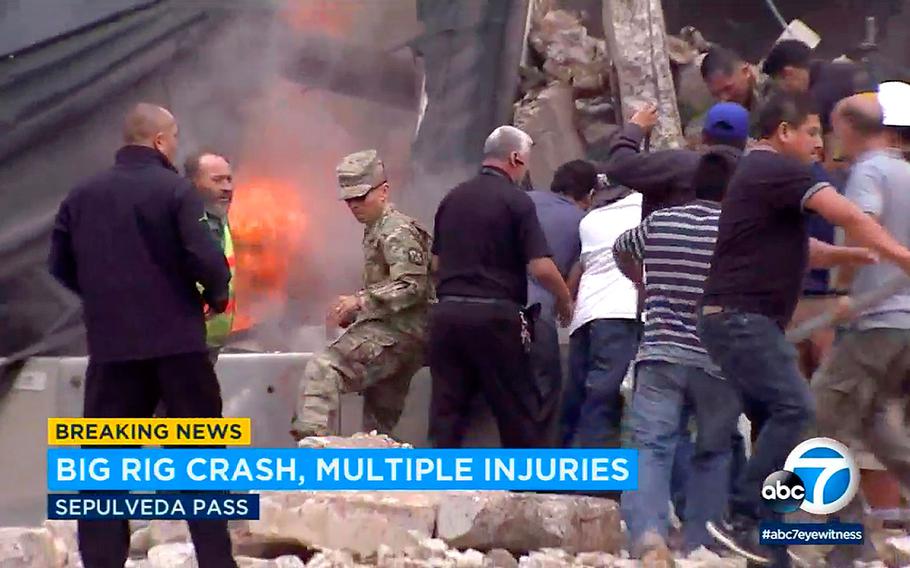 Bystanders rush to rescue people trapped in wreckage as flames break out after a big rig gravel hauler and cars collided on southbound Interstate 405 near the Mulholland Bridge on the west side of Los Angeles, Monday, April 30, 2018. (KABC-TV via AP)

Bystanders rush to rescue people trapped in wreckage as flames break out after a big rig gravel hauler and cars collided on southbound Interstate 405 near the Mulholland Bridge on the west side of Los Angeles, Monday, April 30, 2018. (KABC-TV via AP) 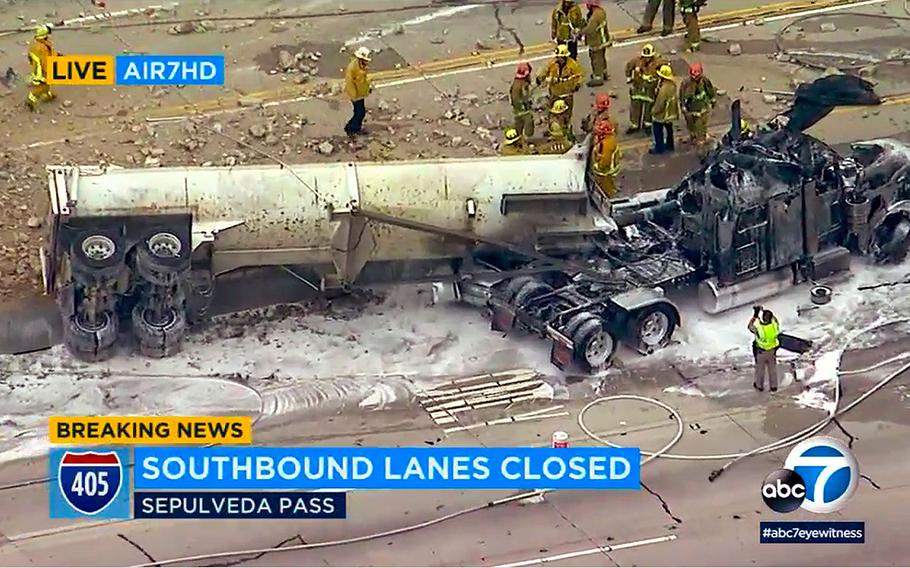 Emergency crews work around the wreckage on southbound Interstate 405 near the Mulholland Bridge on the west side of Los Angeles Monday, April 30, 2018. The fiery crash injured three people, two critically. (KABC-TV via AP) A group of soldiers drew on experience gained from overseas deployments when they helped rescue a Los Angeles motorist from a flaming wreck on the 405 freeway earlier this week.

A video posted to social media shows a white minivan pull up and four soldiers hopping out to assist at the scene Monday afternoon. Moments earlier, a northbound big rig truck had hit the center divider and flipped its trailer, spilling concrete and gravel onto the roadway.

“It looked like it exploded,” Sgt. 1st Class August Maggio told KTLA news. Maggio had been driving the minivan full of instructors and staff of UCLA’s Army Reserve Officer Training Corps program back to the Westwood campus. “Dust went up, there was a giant fireball.”

The four uniformed ROTC instructors, each with more than 15 years in the Army and at least one downrange deployment, and two civilians had been passing southbound through the Sepulveda Pass and were among the first to arrive on the scene.

Maggio and Maj. Tyrone Vargas helped the driver from the burning rig before realizing that a crumpled Honda was pinned under the truck and rapidly becoming engulfed in flames.

“That’s when we all rushed to aid the trapped driver of the car,” said Maj. Steve Kwon, who was visiting UCLA from Fort Knox, Ky., according to a university news release. “The fire was already burning and was picking up flames.”

A chunk of reinforced concrete from the truck was blocking the efforts to extract the driver, who was on fire.

The man screamed in pain, said Vargas, who told KTLA he battled to keep the smoke from the rescuers’ eyes and the flames from the driver’s body.

Other motorists stopped to help, and video shows some scooping up handfuls of dirt that spilled out of the truck and tossing it on the fire in attempts to suppress the blaze. A soldier standing on the center barrier is seen trying to budge the concrete and steel obstacle.

Soon, someone arrived with a battery-powered saw. One of the soldiers cut through the obstacles another pulled the driver from the wreck.

“Within 30 seconds, the entire vehicle was engulfed in flames,” Kwon said.

The driver was transported to UCLA Ronald Reagan Medical Center with third-degree burns. The soldiers planned to walk across campus to visit and check in on his recovery, officials said.

“I truly believe they saved his life,” California Highway Patrol Sgt. Jose Ahumada told KTLA. “To them, we say thank you very much.”

Vargas told Stars and Stripes he was just happy the man and his family might have a chance to see each other again. Back at the office night of the crash, Stambersky had reminded them all to hug their families when they got home.

The big rig driver and two other motorists were reportedly taken to the hospital for treatment. Emergency crews arrived on scene and put out the fire, though traffic was backed up for hours.

The soldiers credited their Army training and experience with giving them the skills and mindset to react quickly to the chaotic situation.

“We train, we work, we’re ready for when anything happens to make decisions and then lead,” said Vargas. “Everybody just fell in line ... We could not have stopped the fire. It was too big already. But we had enough time to save this individual.”

Kwon hadn’t met Vargas or Maggio until the day of the accident, he said, but the experience quickly bonded them.

“Just the communication we had, we’ve already established a rapport and I would gladly have any of these people in my foxhole during combat,” he said.

It was also a rare chance for the nearly 100-year-old ROTC program to locally practice in the real world what they teach about 100 enrolled cadets on campus, officials said.

“We talk about our deployments to Afghanistan and Iraq, but never in a million years would you ever expect to be called upon to do something in Los Angeles,” Stambersky said.

Vargas, a 22-year veteran, said he’s been drilling it into the cadets to make decisions and be leaders that others will follow. The day after the crash, he said, a cadet approached him after seeing video of the rescue.