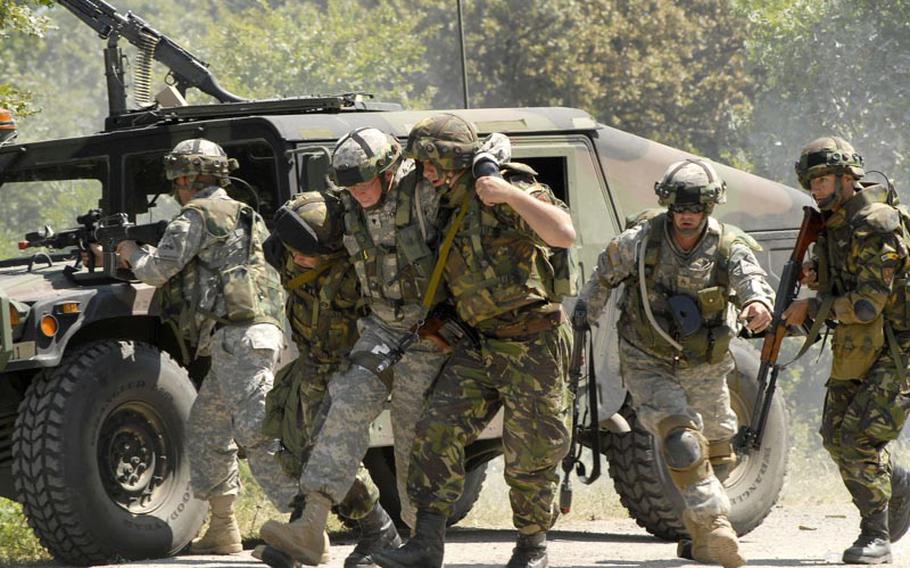 A squad of soldiers attempts to evacuate a "wounded" colleague to safety from the attack area of a convoy ambush training exercise held at the Novo Selo Training Area, Bulgaria in 2006. With the Army poised to begin a substantial troop drawdown in Europe, the Pentagon plans to shift more of its mission in Europe to rotational U.S.-based troops. (file photo Gary L. Kieffer/U.S. Army)

A squad of soldiers attempts to evacuate a "wounded" colleague to safety from the attack area of a convoy ambush training exercise held at the Novo Selo Training Area, Bulgaria in 2006. With the Army poised to begin a substantial troop drawdown in Europe, the Pentagon plans to shift more of its mission in Europe to rotational U.S.-based troops. (file photo Gary L. Kieffer/U.S. Army) 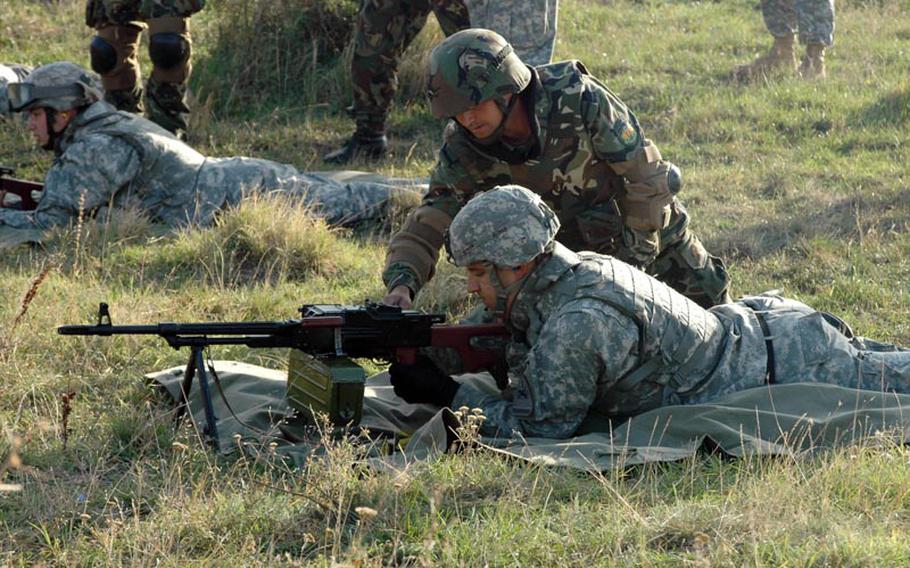 STUTTGART, Germany &mdash; The ranges in Bulgaria are now empty, but when U.S. forces rotate through later this year to work with allies, those vacant training grounds will be transformed.

&ldquo;When we show up this summer, we&rsquo;ll have the targets for them,&rdquo; said Will Alston, chief of the Regional Training Support Division-Expeditionary team in Grafenw&ouml;hr, Germany. &ldquo;We&rsquo;ve got it down to a science now.&rdquo;

The expertise of these six-to-eight man teams will be crucial as the Army begins a system of rotating soldiers in from the United States, to replace the two Europe-based brigades that are being drawn down as part of the Pentagon&rsquo;s budget cuts.

For the military, reorganizing the force structure in Europe will mean a new way of doing business for some U.S.-based troops while maintaining Europe-based support units that make rotational training possible. It also will pose challenges for commanders, who will have to do more with less and find new ways to use rotational forces to accomplish the mission. Meanwhile, U.S. soldiers can likely expect fewer two- and three-year assignments in Germany.

As part of the Pentagon&rsquo;s plan for reducing its footprint in Europe, it will either inactivate two Army heavy brigades, or reposition them in the United States. Some support units also are expected to leave Europe as part of that plan. Defense Secretary Leon Panetta says more of the military mission in Europe will be executed by rotational forces under the plan outlined in a preview of new Defense Department budget projections.

Lt. Gen. Mark Hertling, commander of U.S. Army Europe, says Army training facilities in Grafenw&ouml;hr and Hohenfels will be a key part of that effort and will serve as a destination for U.S. units.

While there is talk of regionally aligned brigades to operate on rotational missions overseas, the plan in the near term will be more modest in scope, according to Hertling.

However, the mechanics of the rotational deployments are still being worked out, according to USAREUR.

USAREUR isn&rsquo;t alone as it develops plans to carry out a more rotational-focused mission in Europe.

In the case of the Marines, commanders are in the midst of conducting a cost analysis aimed at determining the most efficient way to deploy rotational forces. In particular, the Corps needs to find the right balance of active duty Marines versus Reservists, who cost more to deploy, according to Lt. Gen. Dennis Hejlik, commander of Marine Forces Europe and Marine Forces Command.

&ldquo;We have to be very careful that we are not over-extending our resources,&rdquo; Hejlik said. &ldquo;That&rsquo;s what we&rsquo;re working on. We&rsquo;re taking a hard look at that: What&rsquo;s the difference in cost?&rdquo;

Unlike active duty troops, who are paid regardless of whether they are deployed to Europe, activating reservists adds more troops to the overall payroll.

Regardless of whether they are active duty troops or reservists, servicemembers who will be taking part in these missions should not expect a one-size-fits-all approach for their deployments to training grounds across the region, according to military officials. Missions could be for a few weeks or months. Servicemembers could be deployed in squads, companies or battalions. The missions could take them to Germany or Romania, or even Africa.

&ldquo;They&rsquo;re scalable. They&rsquo;re flexible. They&rsquo;re adaptable,&rdquo; said Lt. Gen. John Paxton, commander of Marine Forces Africa and the Corps&rsquo; II Marine Expeditionary Force. &ldquo;Whether they fly over, or are aboard a ship, we can tailor the size of that force. It can be small as a team, as intermediate as a company, and maybe as big as a battalion. They can be deployed multiple places and be employed in multiple mission sets.&rdquo;

Still, the rotational model has some limits, Paxton said.

In the case of the Marine Forces Africa, which is headquartered in Stuttgart and maintains a rotational task force of Marines in Italy to execute the Africa mission, additional air and logistical support will eventually be required, he said.

&ldquo;You need some type of hub and spoke, and you may need some kind of base infrastructure in Europe or in Africa,&rdquo; Paxton said. &ldquo;This is for the departments of Defense and State to work out.&rdquo;

&ldquo;You need intra-theater lift. You need to be able to get them out to remote places, whether its fixed wing or rotary wing, and then you need to sustain them,&rdquo; Paxton added.

Even with a rotational approach, Panetta said, allies could soon see more engagement with their U.S. counterparts, given that Europe-based brigades have spent so much time in Iraq and Afghanistan this past decade.

But frequent training deployments will mean time away from family. However, Marine commanders say the concept isn&rsquo;t viewed as a hardship by rank and file troops.

&ldquo;You don&rsquo;t join the Marine Corps, or any of the services, to sit in garrison,&rdquo; said Hejlik, who said 350 Marines volunteered for the upcoming five-month training mission in the Black Sea region as evidence that troops are seeking out opportunities to train in Europe.

As troop levels drop in Afghanistan, Marines will be looking for other missions, Paxton added.

&ldquo;As we look to restructure all the forces, the ones who want to stay want to capitalize on what they&rsquo;ve learned,&rdquo; Paxton said. &ldquo;They don&rsquo;t want to sit in North Carolina or California. They want to go to Africa, the Black Sea. They&rsquo;re looking to do something tangible.&rdquo;

For USAREUR, the past decade has already been marked by a shrinking footprint.

Yet during that time, cooperation with allies hasn&rsquo;t suffered, according to the USAREUR commander.

&ldquo;We have advanced considerably in our partnering abilities,&rdquo; Hertling said.

USAREUR&rsquo;s expeditionary training support team, based out of Grafenw&ouml;hr, is one of the units that has made it possible for other services to rotate through Europe.

As Marines fan out across eastern Europe later this summer, they&rsquo;ll be using facilities built by Alston and his team from Grafenw&ouml;hr.

In less than two weeks, Alston&rsquo;s crews can sweep through bases in places such as Bulgaria to erect mock villages for counterinsurgency training, build firing ranges and prepare allies for peacekeeping missions or the war in Afghanistan.

&ldquo;We come pretty close to replicating&rdquo; the facilities in Grafenw&ouml;hr and Hohenfels, Alston said. &ldquo;I think it&rsquo;s a good service and there is a lot of use for it.&rdquo;