Rota to get $24.8M commissary, exchange 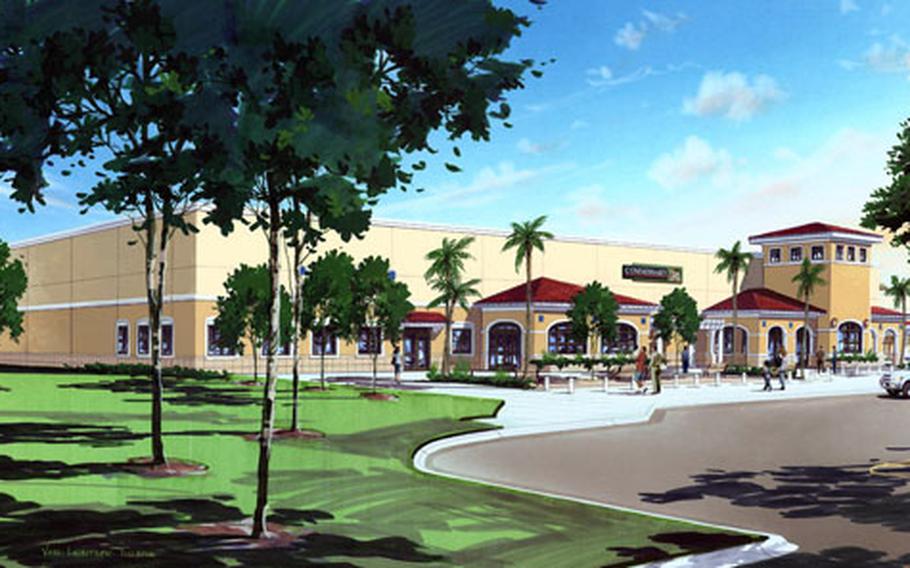 An artist rendering of the retail complex slated for Naval Station Rota, Spain. The $24.8 million complex, a combination of commissary and Navy Exchange, is scheduled to open about Sept. 2007. (Courtesy of Defense Commissary Agency)

Next year, troops and their families in Rota, Spain, will be shopping in a new $24.8 million complex, including a commissary shopping area that will be about twice as large as the current facility, officials said.

The combined commissary and Navy Exchange, roughly 185,000 square feet, is slated to open around September.

The area where customers will shop for groceries will expand from 13,185 square feet to 22,282 square feet, and will have larger spaces for display and sale items, a larger freezer section, an expanded produce area, and a bigger deli area to provide better variety, commissary director Linda Foreback said.

The new 135,000-square-foot Navy Exchange side of the complex will consolidate the exchange, Sight & Sound, video mart and home center, which are now in separate locations, said Navy Exchange spokeswoman Kristine Sturkie.

The store also will have wider aisles and new retail fixtures.

The combined complex will include a food court, barber and beauty shop, laundry and dry cleaning and photo studio.

The food court eateries still have not been determined, Sturkie said.

&#8220;In this new &#8230; shopping center, customers will benefit from a new facility and all of their shopping in one location, [instead of] dispersed areas about the base,&#8221; Navy Capt. Earl Hampton Jr., commander of Naval Station Rota, said in a statement.

The complex is being built a little more than a mile from the current and aged commissary; cater-cornered to the new security building and next to the video mart, Foreback said.

The current commissary was built in 1957, though it has been renovated several times, DECA spokeswoman Gerri Young said.

Officials broke ground Nov. 16, and anticipate the project will be completed around July.

&#8220;We are very excited about this project,&#8221; Gerald Outar, general manager of the Rota Navy Exchange, said in a statement.

&#8220;Once it&#8217;s finished, Naval Station Rota will have a world-class shopping complex. I think our customers will be very pleased with what they see and the convenience of shopping both the Navy Exchange and commissary.&#8221;