A U.S. Navy scraper from Naval Mobile Construction Battalion 74 smooths out the beach in Valdegrana, Spain, on Thursday. Navy Seabees deployed to Naval Station Rota are repairing the beaches near the Navy base in a goodwill project. (Scott Schonauer / S&S)

A U.S. Navy scraper from Naval Mobile Construction Battalion 74 smooths out the beach in Valdegrana, Spain, on Thursday. Navy Seabees deployed to Naval Station Rota are repairing the beaches near the Navy base in a goodwill project. (Scott Schonauer / S&S) 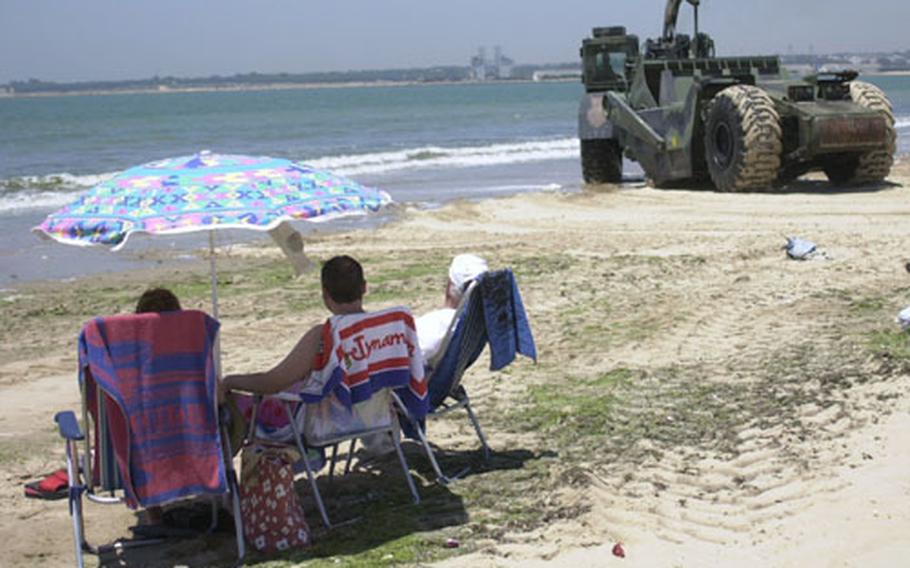 VALDEGRANA, Spain &#8212; It might just be one of the best jobs a Navy Seabee could do: spend weeks helping repair some of southern Spain&#8217;s most beautiful beaches.

While the hours are long, the views are great &#8212; though they can be slightly distracting. And the local restaurants spoil the crews with hospitality and plenty of delicious Spanish food.

Every year, beginning in early May, the Navy construction battalion deployed to Naval Station Rota tackles the job of smoothing out the area beaches along the Costa de la Luz. This year, the Gulfport, Miss.-based Naval Mobile Construction Battalion 74 has the duty of repairing what the winter tides damaged.

This is the 25th year the Seabees have helped rebuild the beaches &#8212; just in time for the tens of thousands of tourists who will converge on the coast for sun and fun. Crewmembers working 15-hour days will complete the job this weekend.

Since May 3, the battalion&#8217;s Company A has grated nearly 13 million square feet of sand on four beaches with a pair of scrapers and a couple of bulldozers, Chief Petty Officer Eleeta Teasley said.

While driving circles in the sand can get monotonous, the duty is not without some interesting moments.

On Thursday, for example, a topless woman came up to Navy Constructionman Joshua Hamman, 18, of Bent Harbor, Mich. to ask a question. She wanted to know if the big scrapers had air conditioning on a day when temperatures were in the upper 80s. Hamman just shook his head and smiled.

The Navy provides the Seabees and the equipment for free, while the cities this year are paying for the fuel. Local restaurants along the beaches give the crews free meals.

While the beaches look better, Ingham said not everybody is appreciative.

The crews start early in the morning, sometimes waking up beach residents, and sunbathers sometimes have to give up their favorite spots on the sand to make way for the bulldozers.

But, in the end, the crews said the residents and the tourists have a much better beach. Winter storms do a lot of damage to the coast, and the Navy does the project annually as goodwill gesture.