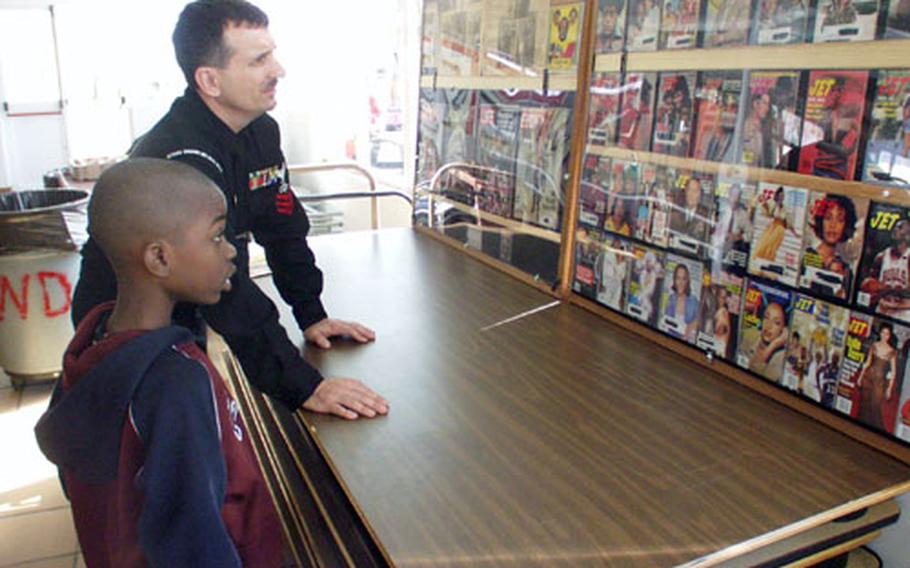 Some of the elementary students might have recognized only a few of the historical black figures pictured on the covers of the magazine display. But the exhibit had third- and fourth-graders looking, pointing and asking questions.

And that was exactly the reason why Petty Officer 1st Class Don Dodson took the magazines to the school.

Dodson, an information technician stationed in Rota who is Native American, has never owned a subscription to Jet magazine, which is geared toward black American readers. But he has an impressive collection, owning issues from 1951 to today.

For the last several years, collecting Jet has been his passion.

A chance meeting helped sparked his interest in collecting black periodicals and his search for rare Jet magazines.

In 1997, he met the owner of a home he was thinking about buying. While looking through the house, Dodson admired the woman&#8217;s old newspaper clippings. One of them included a 1948 issue of Chicago Defender, the first black newspaper to have a circulation of more than 100,000.

A year later, he found a stack of old Jet magazines at a flea market. He bought them for friends but ended up keeping them. From that moment on, he started looking for more issues.

Through the Internet and eBay auctions, he was able to find more than 55 Jet magazines, including one from each year. His most prized possession is a 1951 issue that took him six months to obtain.

In his pursuit for more magazines, he says he has met some generous people who have helped along the way. One gave him a membership card for the March on Washington Movement dated 1945-46. It was a &#8220;thank-you gift&#8221; for buying one of the magazines.

Dodson has put the card, his Jet magazines, the front page of the Chicago Defender and three early copies of Ebony magazine in a case to show people. Avid readers of Jet magazine often say that the collection brings back memories.

One issue has civil rights leader Martin Luther King Jr. on the cover.

Another has Colin Powell in his uniform.

Dodson says he has received offers from people who would like to buy his collection but he refuses to sell it.

He estimates that he has spent $3,000 on the collection and plans to pass it down to his children.

And that reason, he says, is to share it.