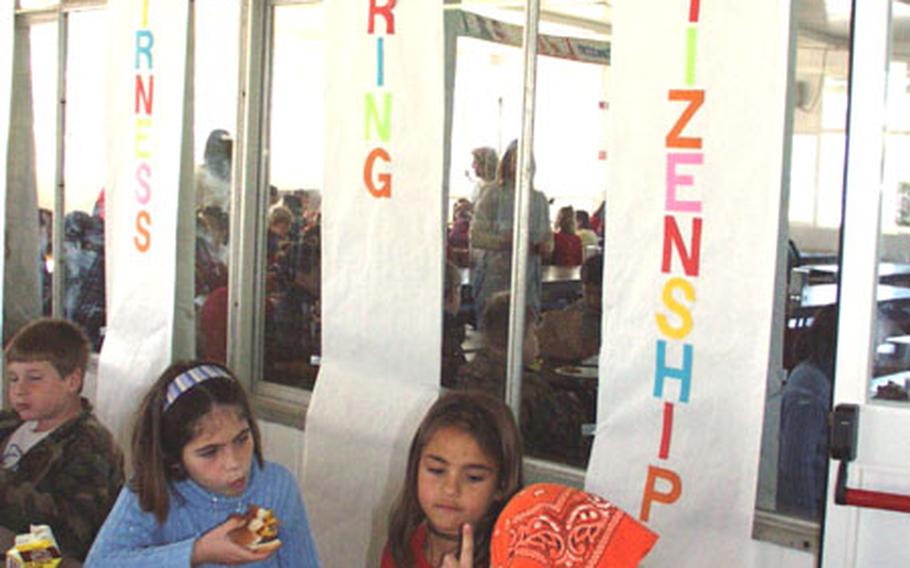 Third-graders Alisha Schiermeyer, Alyssa Toney, and Tamela Queen eat lunch Monday at Naval Station Rota, Spain, in front banners signifying three of the six pillars of character. The base&#39;s elementary school along with all Defense Department schools in the Mediterranean School District have adopted "Character Counts!" The character-building program is popular among schools in the United States. (Scott Schonauer / S&S)

The cafeteria signs, along with the posters and construction-paper collage bulletin boards, are the first salvo in the Rota school&#8217;s new character-building campaign. Students, teachers and parents have adopted the popular Character Counts! program, a value-based training initiative sweeping through schools and communities in the United States.

If a classroom near you isn&#8217;t promoting the pillars, chances are it will soon.

The Department of Defense Dependents Schools&#8217; Mediterranean district is the latest organization to get on the bandwagon. Schools in Spain and Turkey began implementing Character Counts! this year. Some teachers and counselors in Italy started the program as early as 1998.

Last year, the Army joined the growing coalition of schools, businesses and communities and adopted the program for all of its bases worldwide.

Teacher Kathleen Wilson said the school has tried other character-building programs but Character Counts! is so appealing because it focuses on values that are widely accepted across race, religion and cultures.

And there is a need.

In a recent end-of-the-school-year survey, fourth-, fifth- and sixth-graders listed petty theft and bullying as their biggest concerns, Wilson said. That&#8217;s why she believes the character-building program is a good fit for the school.

Pam Harrison, whose husband is a Navy criminal investigator stationed at Rota, said she got involved in the program after she saw a promotional video. Harrison, a mother of two grown daughters and a 7-year-old son, will soon train adults on how to teach the pillars to children.

Character Counts! was founded in 1992 by California lawyer Michael Josephson and his Josephson Institute of Ethics. It is a &#8220;nonprofit, nonpartisan, nonsectarian coalition&#8221; of schools, youth groups, communities and organizations, according to the Character Counts! Web site.

The program &#8212; along with similar character education initiatives &#8212; grew in popularity after the 1999 Columbine High School shootings in Colorado.

Concern over surveys that show cheating, bullying and violence are rampant in schools also encouraged schools and communities look for help in moral-boosting curriculum.

Although there are other character-building programs, Josephson&#8217;s has become the most popular.

Wilson said one of the important aspects of instilling good character rests with adults, who need to be role models. She said the message also should be conveyed in an honest manner that isn&#8217;t &#8220;wishy-washy.&#8221;

A task force hopes to take the message beyond the banners in the lunchroom by holding a parade in July and having teachers focus on the pillars in the classroom.

She said pointing out or complimenting students on good behavior is better than superficial praise in the form of stickers or gold stars.