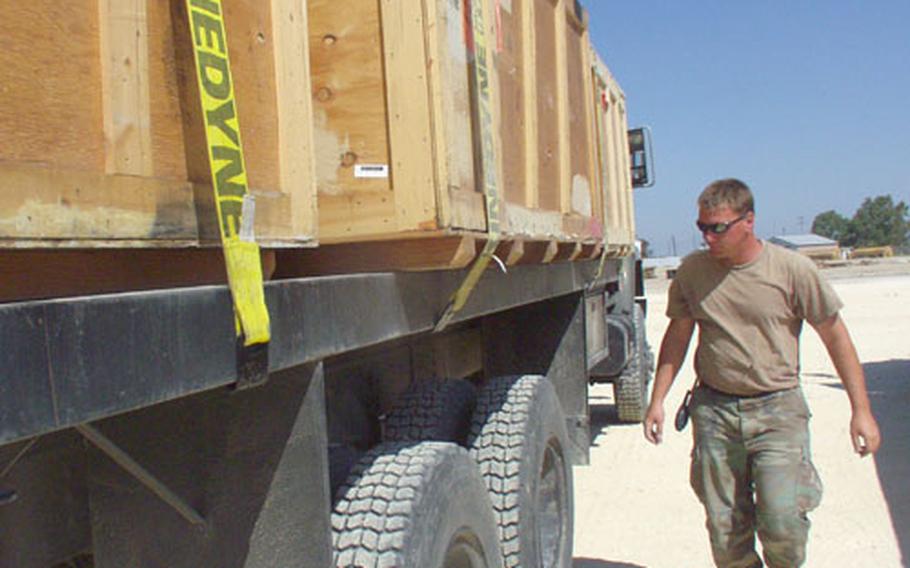 A Navy Seabee on Monday walks past a truck loaded with crates filled with tents used for a fleet hospital at Naval Station Rota in Spain. (Scott Schonauer / S&S)

NAVAL STATION ROTA, Spain &#8212; A tent hospital that treated hundreds of casualties from the war in Iraq has shut down and is sending its deployed doctors, nurses and corpsmen home.

Fleet Hospital Eight in Rota treated its last patient on Friday and began tearing down the hospital that afternoon. Navy Seabees spent most of Monday preparing cargo-ship crates packed with the hospital&#8217;s medical equipment and desert-colored tents for shipment back to the United States.

U.S. troops wounded and injured in the Persian Gulf region will be handled by Landstuhl Regional Medical Center in Germany.

U.S. servicemembers are dying at an average of one a day since President Bush declared major combat operations in Iraq over May 1.

While Defense Secretary Donald Rumsfeld said Sunday that attacks against U.S. forces in Iraq could increase in the next few weeks, Pickett said it would take &#8220;significant hostilities&#8221; to require the fleet hospital to reopen.

Stacked crates and a wide-open dirt field near the base runway are what remain of the hospital, although a sign welcoming patients to Fleet Hospital Eight still stands.

Someone has taped a &#8220;For Sale&#8221; poster to the welcome sign, jokingly asking for $38 million for the spot the hospital once stood. The hospital is not included, the poster reads.

Members of the medical team in Rota found out on July 4 that they would be going home, an announcement greeted by cheers from personnel who have been away from their families for five months.

Navy Lt. Brad Kluegel, the hospital&#8217;s operations officer, is excited about returning home to see his wife and three children.

The bulk of the medical personnel is from Bremerton, Wash. They will leave in two groups. One group of about 170 people leaves this week. The rest is scheduled to depart southern Spain next week.

Since the hospital opened in February, doctors and nurses have treated 1,380 patients and performed 262 surgeries.

Fleet Hospital Eight and Landstuhl served as the primary medical centers in Europe for casualties from Iraq. In a U.S. military wartime first, doctors near the front lines stabilized troops injured in battle before flying them in specially equipped transport planes to Germany or Spain.

Most of Fleet Hospital Eight&#8217;s staff arrived in February and set up an initial 116-bed facility before Operation Iraqi Freedom was launched March 20. Although the hospital was not a secret, the military downplayed its presence because of the anti-war sentiment in Spain.

About a month later, the Navy built a second, 250-bed hospital and mothballed the smaller facility. Additional personnel from U.S. bases were sent to help.

Crates containing the hospital&#8217;s X-ray machines, surgical instruments and other equipment will remain in Rota until they are shipped to a warehouse on the U.S. East Coast. The gear will be refurbished so it can be used again.

Meanwhile, the Navy is trying to figure out what to do with the wooden huts that housed hospital personnel. The SEA Huts will be moved regardless of what is done with the units, base spokesman Lt. Corey Barker said.

The huts are on the site of a planned Navy Exchange complex and must be moved before construction begins.