Flight Instructor Julio Suitt checks to see if the fuel in a Cessna 120 is free of sendiment ... (Scott Schonauer / S&S)

Flight Instructor Julio Suitt checks to see if the fuel in a Cessna 120 is free of sendiment ... (Scott Schonauer / S&S) 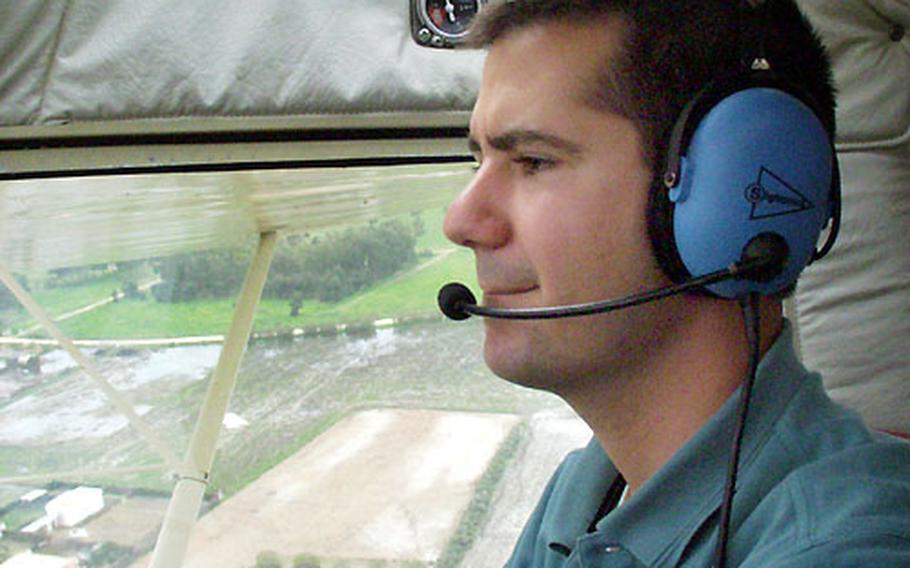 ... and then takes to the skies over the farmlands of Rota, Spain. ()

But time and money always seemed to get in the way of his goal.

Then he found out about the Rota Navy Flying Club, an organization offering inexpensive flight training to military personnel or Defense Department civilians interested in aviation either as a hobby or a career.

Moore, a Navy aircrewman, joined the club and got his license this year, fulfilling a dream he has had since he was a boy.

The club is one of the few of its kind in Europe.

Some sailors and airmen join in hopes that they can later become Navy and Air Force pilots. Other members want to leave the service to become commercial pilots or flight instructors.

The rest just love to fly.

The cost of getting training through the club is about $2,500 over six to eight months. Other clubs and academies in the States charge twice as much.

The price largely depends on how long it takes a student to grasp the fundamentals of flying. Ground school costs $150 and instructional flights cost $45 each. To be eligible for a license, students must complete at least 40 hours of flight training. That includes solo, cross-country and night flying. Most students, however, take 55 hours to hone their aviation skills.

Regulations also prohibit pilots from flying any farther than 12 nautical miles from the naval station. But club members are trying to get the rule changed, allowing cross-country flights.

Club manager and flight instructor Julio Suitt said members would like the club to grow.

There are plans for a new hangar to house the club&#8217;s two operational planes, and members are working to add another plane. The group currently has a 150 Cessna and a 1946 Cessna 120 taildragger.

Rota&#8217;s flying club has been around since the 1950s. Since its inception, members have provided the bulk of the financial support for the club. When membership goes down, which it tends to do especially in winter, the club struggles to make ends meet.

Today, the club offers introductory flights for $45. Students or potential students can go up in a single-engine Cessna and co-pilot the plane with an instructor, performing basic flight maneuvers.

If students catch the flying bug after the trip, they can take the club&#8217;s ground school. The class is designed to help students pass the written test.

Moore said it was not difficult to get his license, but it took some dedication. It can be tough for sailors who must drop their flight training to go on temporary duty or deploy.

But Moore, who has a collection of remote-controlled airplanes, stuck with it because it was his dream to get a license. Now, he wants to qualify to fly dual-engine planes and jet-engine aircraft.

He has considered buying a small plane.