Rota cyclist spins his wheels for his cause 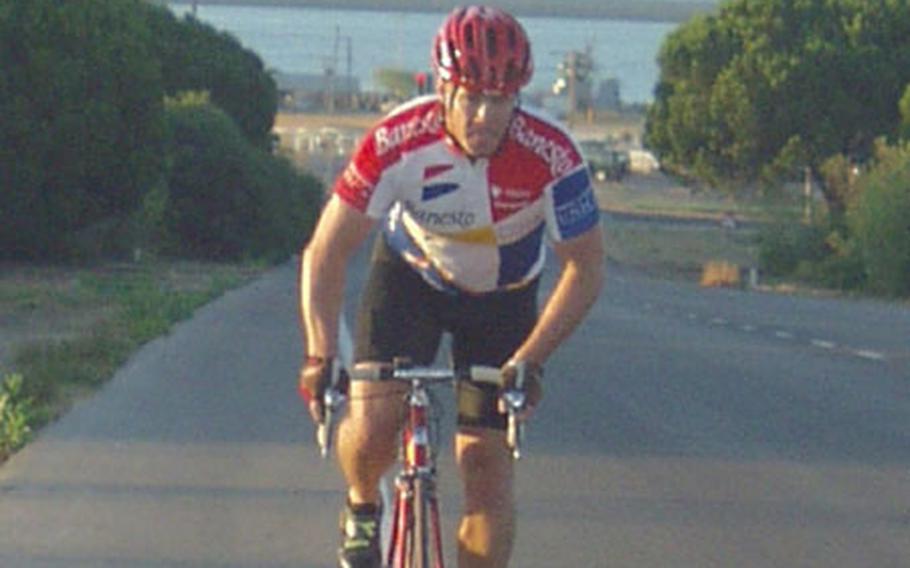 NAVAL STATION ROTA, Spain &#8212; Petty Officer 2nd Class Jason Clayton&#8217;s chin looks as if it might kiss the handlebar of his 18-speed bike as he pedals up another hill on his morning journey.

While Clayton cannot match Armstrong&#8217;s talent on the bike, the two do have some things in common in addition to a passion for cycling.

Both Texans have had their lives changed forever by cancer, and both are trying to help cancer victims and their families cope with the horrible disease.

Clayton has never had cancer, but his mother did when he was growing up, and today she continues to fight its effects.

Clayton, 34, a Navy sonar technician assigned to the Security Department&#8217;s training division at the naval station, said Armstrong&#8217;s own battle with cancer inspired him to raise the money for the foundation.

The foundation helps cancer patients and their families cope with the challenging phases of treatment and beyond. Armstrong was diagnosed with testicular cancer in 1996 and doctors gave him a 50-50 chance of survival. He eventually beat the disease, won four consecutive Tour de France titles and is currently trying for his fifth.

Armstrong formed the foundation within months of his diagnosis, something he deemed &#8220;a special wake-up call.&#8221;

Clayton belongs to Armstrong&#8217;s Peloton Project, a grass-roots fund-raising and outreach program made up of cyclists, cancer survivors and other volunteers. Their goal is to educate people on &#8220;cancer survivorship.&#8221;

He found out about the program after reading Armstrong&#8217;s best-selling book &#8220;It&#8217;s Not About the Bike.&#8221; He liked the fact that the foundation and the Peloton Project focus on educating patients and families about surviving.

Clayton and his two older sisters grew up in a suburb of Houston with their mother in and out of the hospital. Because his father died in a car accident when he was just 20 days old, he and his sisters had to take care of one another.

For years, he said he held some resentment for his mother because he never had a normal childhood.

It wasn&#8217;t until Clayton was older and began raising his own children that he started to realize the sacrifices his mother made to provide for him and his sisters.

Clayton entered the Navy to help provide for his sons after his divorce.

He started cycling to lose the 25 pounds he gained while living on a submarine. His roommate while he was stationed in Hawaii turned him on to the sport.

Now, he says, he feels free when he is on his bike. Free from stress. Free from work. Free from any problems he might be going through.

Since he started cycling in 1999, Clayton has finished 10 triathlons and numerous bike races. He hasn&#8217;t won any, but winning is not important to him.

Just finishing a grueling triathlon of running, swimming and cycling is an achievement in itself, he said.

Clayton tries to ride a couple of times a week. Every two weeks, he embarks on a 100-mile trek through southern Spain.

When he&#8217;s not cycling, he is raising money for Armstrong&#8217;s foundation. He has teamed up with other volunteers to hold carwashes and other fund-raising activities to help him reach his goal.

Because he will be leaving Rota soon for scuba diving school in Panama City, Fla., and his eventual next duty station in San Diego, Clayton&#8217;s money-raising campaign is on hold. But he says he plans to start it up again as soon as he can.

His mother, who still lives in Texas, continues to struggle with problems related to breast cancer. She has gone through additional surgeries recently to remove silicone from her joints after her breast implants ruptured.