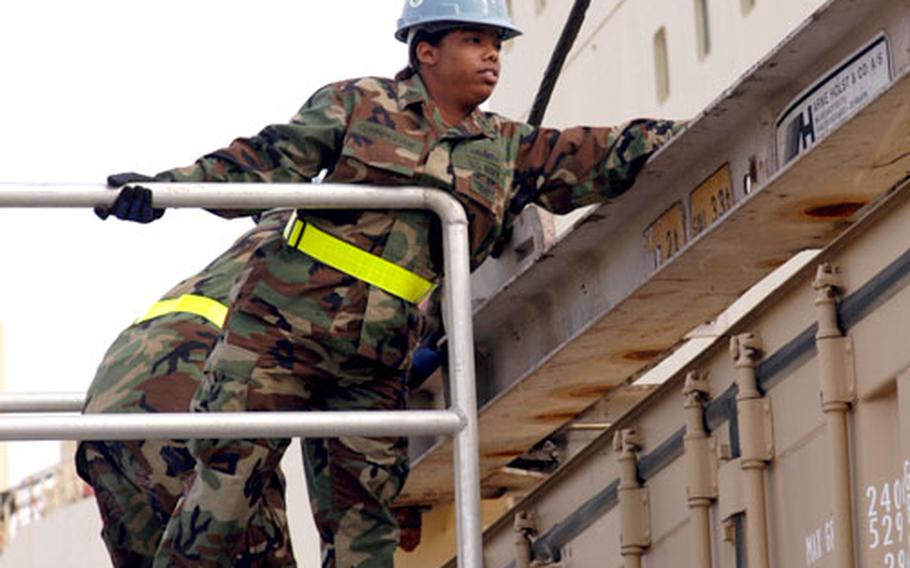 Under the CADS, or containerized ammunition distribution system, the ammunition is moved in standard 20-foot shipping containers by air or sea.

The exercise started in April and runs through June, according to Lt. Major Gooden, Rota&#8217;s weapons officer.

This method of containerizing ammunition was a first for Rota and all of Gooden&#8217;s sailors, he said.

The other services use CADS to move ammunition, but the Navy normally doesn&#8217;t.

Shipboard ammunition needs to be easily accessible for use in guns or on aircraft, and containerizing it makes it easier to ship but harder to access.

Packaging the ammunition in the containers isn&#8217;t as easy as it would seem, said Petty Officer 1st Class Darin Hall, one of the two sailors who received training at Ramstein Air Base.

About 30 sailors from Rota&#8217;s weapons department took part in the packaging, moving and shipping of 93 ammunition containers by sea. Other Rota sailors from various departments helped in the movement and shipment of the containerized ammunition.

In addition to Rota&#8217;s ammunition, base personnel also worked to move an additional 116 containers of ammunition from nearby Mor&#243;n Air Base.

They then spent three days loading all the ammunition onto a cargo ship, which will return to the United States before the completion of the exercise in June.

Working with this new ammunition shipping method, Gooden said, will only benefit the Navy in its interaction with the other services. Rota has Air Force and Marine Corps units permanently assigned to the base and serves as a transit point for Marine units transiting through the Mediterranean.

A number of military bases in Europe other than Mor&#243;n and Rota also took part in this year&#8217;s exercise, including RAF Lakenheath, Ramstein, Spangdahlem Air Base, Camp Darby and Aviano Air Base.