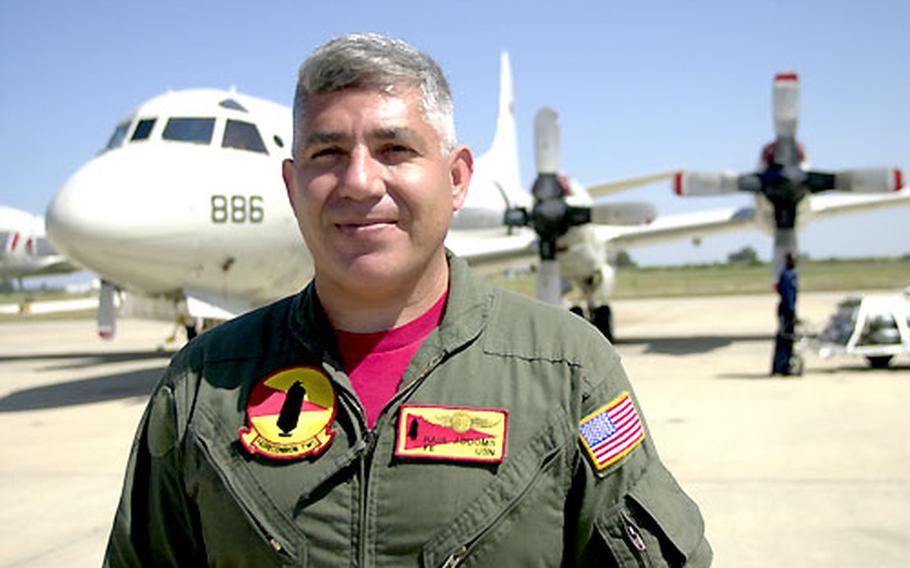 Addoms, a flight engineer with the Rota-based Fleet Air Reconnaissance Squadron Two, surpassed 10,000 flight hours in his career while conducting a mission over Haiti on March 1 in support of Marines on the ground.

It&#8217;s not a record, but it is a milestone that only a small percentage of Navy air crewmembers reach in a career. It can be compared with a professional baseball player reaching 3,000 hits. For most crewmembers, 5,000 flight hours is a major accomplishment. To put it into perspective, 10,000 flight hours is more than an entire year in the sky.

But to Addoms, doubling that figure is no big deal.

Flying has always been in Addoms&#8217; blood. His father worked as an aeronautical engineer in Southern California.

Addoms dreamed of flying while growing up in the San Diego area, but his poor eyesight prohibited him from becoming a military pilot.

Flight engineers, however, do not require perfect vision.

So, when Addoms heard about the flight engineer program from another sailor who had flunked out of the training school, he applied.

He still remembers his first flight in a P-3 Orion, the aircraft his squadron continues to fly today. He never thought the four-engine prop plane could generate so much thrust on takeoff. He compared it to launching off of an aircraft carrier.

That moment hooked him.

The flight engineer, or FE, must know how to operate the engines, and troubleshoot malfunctions in flight. Their main job is to help the pilots if something goes wrong with the plane, using a 4-inch-thick manual as their bible.

Master Chief Petty Officer Glenn Howland said Addoms is a father figure to some of the junior enlisted personnel in the squadron, and everyone in the squadron loves flying with him.

Addoms is not the first flight engineer to fly that much in a career. But he might be the last. The Navy is looking at replacing the aging P-3 with either another turbo prop plane or a modified 737 jet. The newest spy plane might not need flight engineers, he said.

Computers will do the job.

Addoms&#8217; days in the Navy are numbered, too. He plans to retire in March.