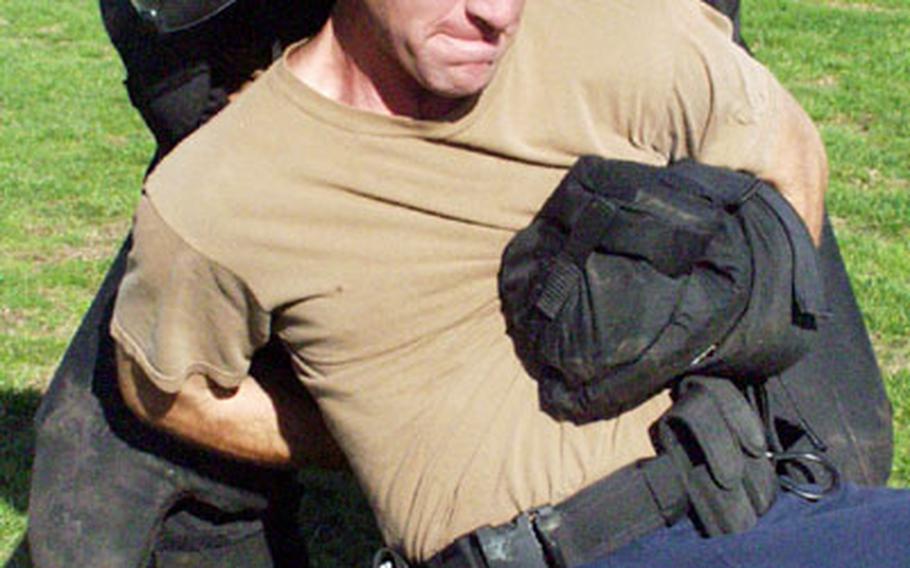 Petty Officer 3rd Class Paul Kuntz tries to keep his plastic gun from an “attacker” in a padded suit as part of a training exercise at Naval Station Rota, Spain. (Scott Schonauer / S&S)

Petty Officer 3rd Class Paul Kuntz tries to keep his plastic gun from an “attacker” in a padded suit as part of a training exercise at Naval Station Rota, Spain. (Scott Schonauer / S&S) 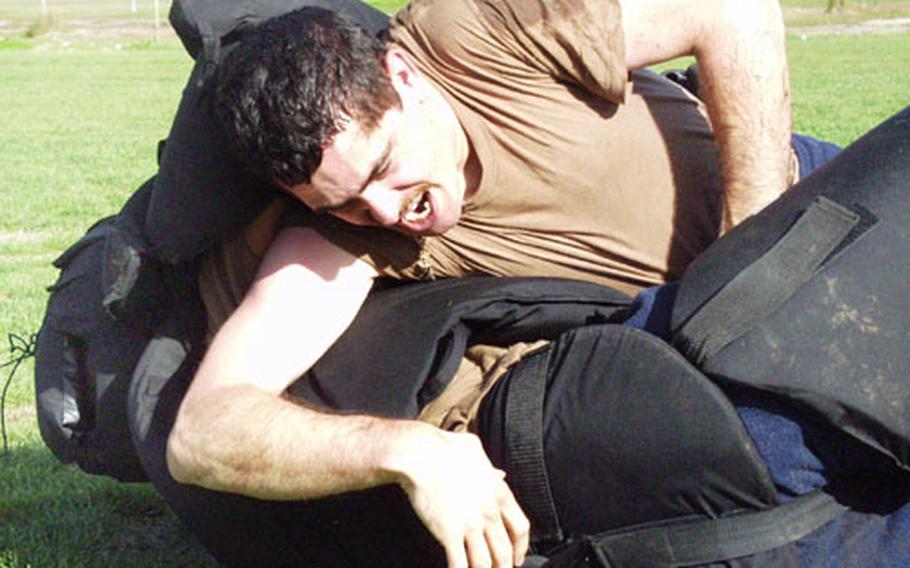 Seaman Apprentice Steven Scott wrestles with a sailor dressed in a hand-to-hand combat suit during security training at Naval Station Rota. The object of the drill was to prevent an assailant from taking the security officer&#39;s gun. (Scott Schonauer / S&S) 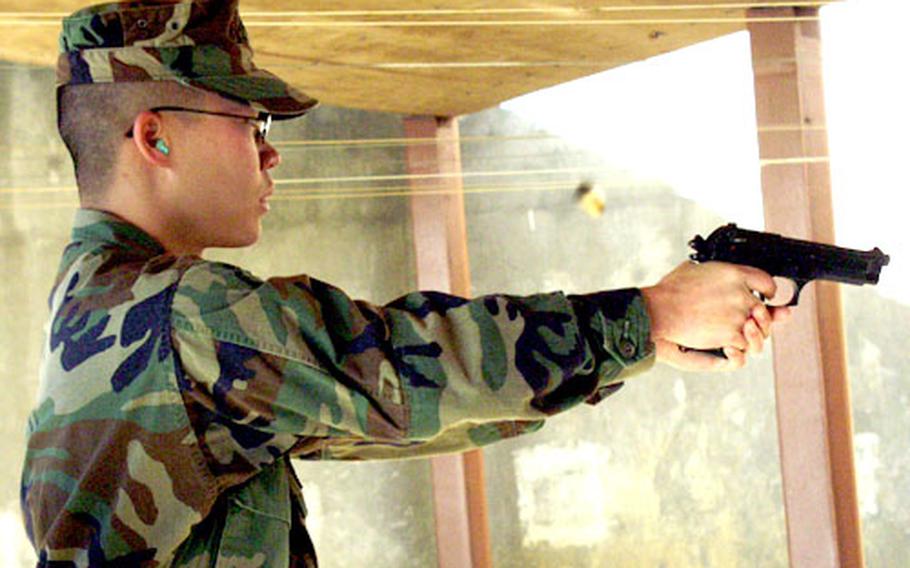 He stands between the yellow lines, loads his gun and aims. With a crowd of sailors and an instructor watching from behind, his trigger hand shakes a little.

For the most part, he hits the right spots, scoring enough points to earn sharpshooter status.

But he insists he could do better.

While most security officers would be proud of such marksmanship, Hung is not a military cop by trade. He is a Navy electronics technician who is among the more than a dozen sailors on base participating in a two-week crash course on force protection and security.

His primary job is with the Rota-based Naval Computer and Telecommunications Area Master Station, but he could get the call to help the naval station&#8217;s permanent security force.

Navy bases worldwide are in the midst of training thousands of sailors to act as part-time, reserve security officers to protect ships and bases against terrorist attacks. As the military braces for a possible confrontation with Iraq, security departments at overseas installations will likely need the extra help to man posts and guard airfields, piers and buildings.

The Navy is trying to boost the auxiliary force in Rota after a review of base force protection measures found that the naval station could use more personnel to aid security in the face of greater terrorist threats.

To meet the base&#8217;s new goal, the department is holding security-training courses every two weeks rather than every quarter, said Lt. Brian Jacobson, Rota security officer. After completion of the training, sailors become members of the Auxiliary Security Force, known on base as the ASF.

The course is a packed, more concentrated version of what Navy master-at-arms sailors go through to earn their security badge.

The course includes the principles of terrorism, basic post security, firearms safety and hand-to-hand combat. After the initial training, sailors must go through monthly refresher courses.

The program is not as detailed as the Navy master-at-arms training, but it is rigorous.

After Hung and other sailors honed their skills on the firing range, instructors set up an obstacle course to test how sailors could shoot on the run. After doing jumping jacks and running in place to get their hearts pumping, trainees must sprint to and crouch behind obstacles before firing at a target.

During hand-to-hand combat training, sailors learn how to wrestle and subdue an assailant who attacks them from behind.

One trainee dresses up in a padded suit and plays the part of the attacker. Trainees have to prevent the attacker from stealing their gun.

At one recent class, a trainee subdued his attacker and then rushed over to help another trainee by tackling his foe.

After the fatal bombing of the destroyer USS Cole and the Sept. 11, 2001 terror attacks, anti-terrorism training at Navy bases and aboard ships became a top priority. In addition to training a reserve security force, the Navy is increasing its full-time, uniformed police departments.

There are about 4,700 master-at-arms sailors, up from 1,700 nearly two years ago. In 2005, the number is expected to grow to 8,867, Navy spokesman Lt. Whit Deloach said. The exact number of auxiliary force members is not available because each base commander determines the size of his or her own reserve force.

Although bases have had auxiliary security forces years before the Cole incident, the way the Navy uses them has changed. No longer are they expected to only fill in during large base social events or concerts. During an emergency or crisis situation, they get the call.

Members must have at least 18 months left at the base, at an E-6 pay rate or below, be in good physical health and have a clean record. They can be from any branch of the military.

The overwhelming majority of the members volunteer for the job.