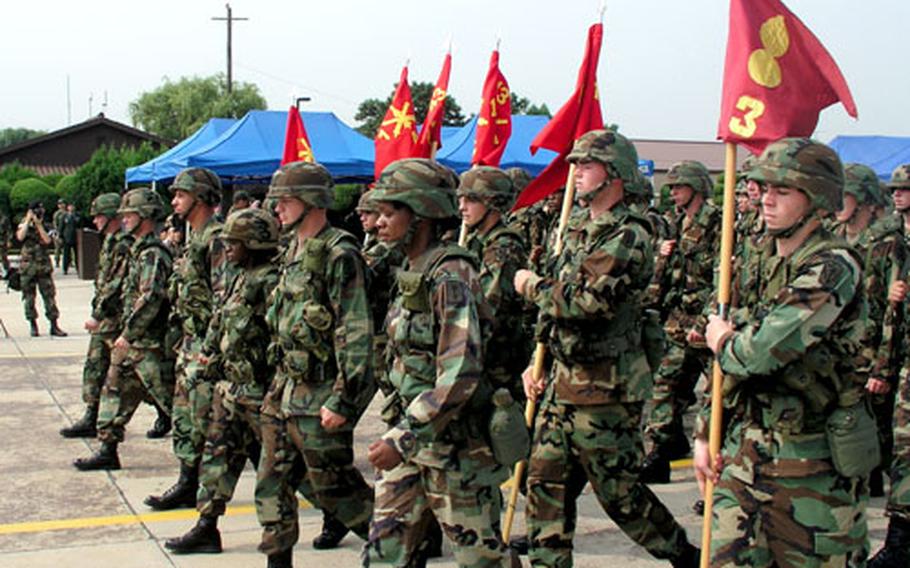 At Osan Air Base in South Korea on Friday, troops of the U.S. Army’s 35th Air Defense Artillery Brigade pass in review during a change-of-command ceremony in which Col. John G. Rossi assumed command of the brigade, a Patriot missile unit. (Franklin Fisher / S&S)

OSAN AIR BASE, South Korea &#8212; The U.S. Army Patriot missile brigade that deployed from Texas to South Korea in 2004 has a new commander Friday following its first change-of-command ceremony on the Korean peninsula.

That period included an intense six-month span during which it received orders to deploy to South Korea, pack up and move its troops and equipment to the peninsula, set up a new headquarters at Osan Air Base and operate firing batteries at four locations around the country.

&#8220;Two years ago, I was given the honor of standing behind a podium and addressing the great soldiers of the &#8216;Ready in Defense&#8217; brigade for the first time in El Paso, Texas,&#8221; Cox said during the ceremony, which proceeded under bright, hazy skies, with the brigade&#8217;s troops formed up along the flight line&#8217;s northern edge.

&#8220; &#8230; Much has happened since &#8230; that this change-of-command is occurring at Osan Air Base, in the Republic of Korea, is just one small indicator,&#8221; he said. &#8220;It is an honor to turn over the brigade to a great leader in Colonel John Rossi. Although I have known him personally for only two years, he has a reputation that precedes him and it is a reputation of excellence.&#8221;

Earlier in the ceremony, 8th U.S. Army commander Lt. Gen. Charles C. Campbell called the brigade&#8217;s deployment to South Korea a &#8220;remarkable achievement.&#8221; Noting the brigade was alerted to deploy in spring 2004, he said, &#8220;less than six months later, they were here in Korea, integrated, prepared and ready to assume their mission. &#8230; Your deployment, Texas to Korea, can best be described by one word: professional!&#8221;

&#8220;Firmly established in Korea,&#8221; Campbell continued, &#8220;the brigade, under Colonel Cox&#8217;s leadership, changed the operational paradigm for Patriot operations on the peninsula. He, along with the other great leaders of the brigade, developed training and exercise plans that moved Patriot operations away from the traditional static defense to a mobile defense.&#8221;

A 1983 West Point graduate, Rossi was commissioned as an officer in the Air Defense Artillery branch.

He holds a master&#8217;s degree in management from Webster University and a master&#8217;s in national strategic studies from the U.S. Naval War College. He also is a graduate of the U.S. Army Command and General Staff College.