Roosevelt sailors made to feel at home in Naples port call 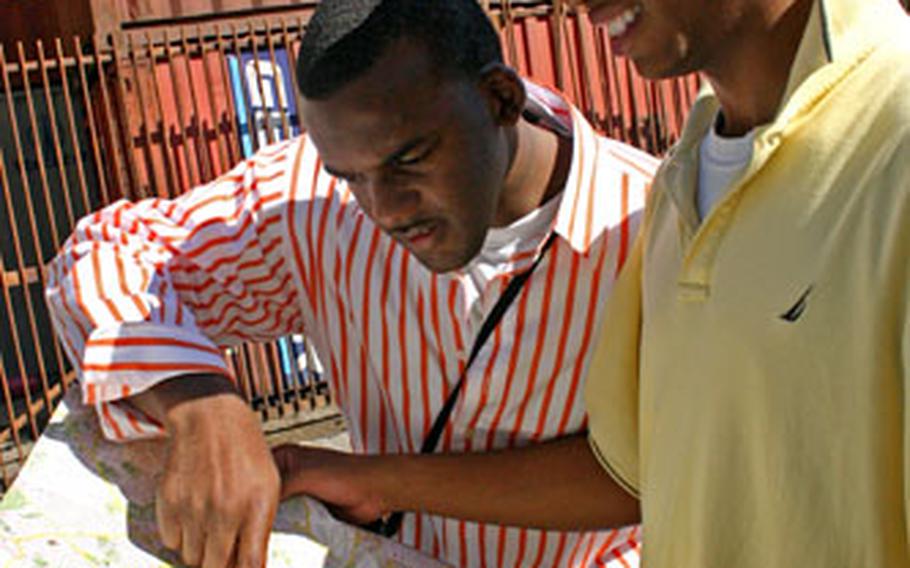 Petty Officer 2nd Class Jesse Johnson points to some key tourist attractions on a map of Rome held by Petty Officer 3rd Class Kristopher Long. The sailors are from the USS Theodore Roosevelt, which made a rare port call in Naples, Italy. (Sandra Jontz / S&S)

Petty Officer 2nd Class Jesse Johnson points to some key tourist attractions on a map of Rome held by Petty Officer 3rd Class Kristopher Long. The sailors are from the USS Theodore Roosevelt, which made a rare port call in Naples, Italy. (Sandra Jontz / S&S) Laura Ingle stands on a pier in Naples, Italy, and scans a water taxi for her husband, who works aboard the USS Theodore Roosevelt. (Sandra Jontz / S&S) 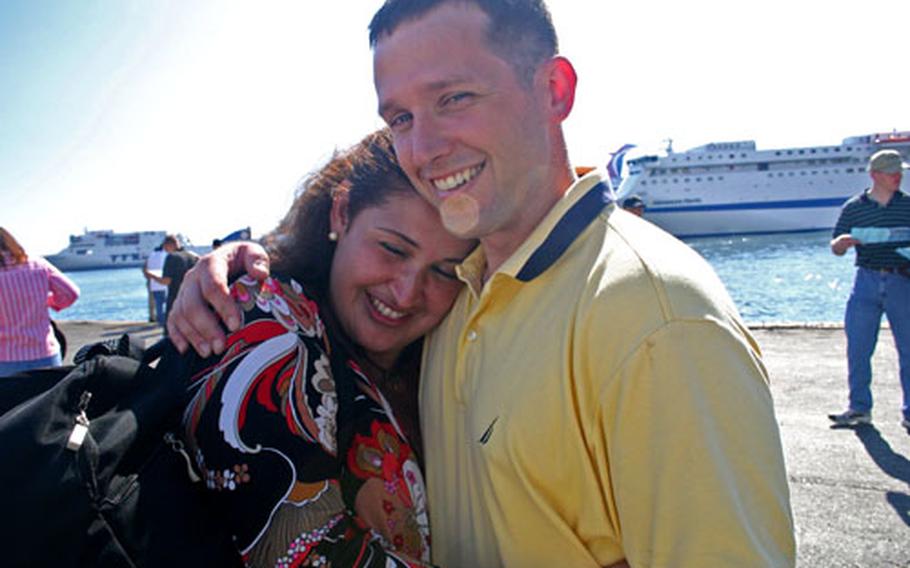 NAPLES, Italy &#8212; At the seventh hour of waiting, Laura Ingle started the pacing. For Laura, unlike her husband of six years, patience is not her strongest asset.

On Sunday, she left her Norfolk, Va., home and two children, one barely 2 months old, flew to Rome, and then took a two-hour train ride &#8212; all so that on Monday morning she could surprise her husband, Petty Officer 1st Class Kenneth Ingle, as he came ashore in Naples for a port visit.

The hours dragged Monday as water taxi after water taxi showed up pierside, ferrying hundreds of sailors from the USS Theodore Roosevelt anchored about five miles out. Hour after hour, Kenneth Ingle didn&#8217;t show. Laura grew increasingly frustrated at the wasted hours &#8212; he on the ship and she alone on the pier.

Finally, clad in a yellow T-shirt and toting a sea bag of dirty laundry, Kenneth Ingle sauntered off a boat and slid into his wife&#8217;s eager embrace.

The nuclear-powered aircraft carrier, its air wing and battle group deployed from Norfolk on Sept. 1 on their way to relieve the USS Nimitz in the Persian Gulf to support the wars in Iraq and Afghanistan.

Naval Support Activity Naples and its Morale, Welfare and Recreation office rolled out the red carpet for the Roosevelt sailors Monday for their first day of a weeklong port call &#8212; from fresh-cooked hamburgers and hot dogs waiting at the pier to transportation, organized tours, sporting activities and an Oktoberfest celebration at Carney Park.

The commercial firm of Multinational Logistic Services Ltd. provided everything from the barges that carried the sailors to shore to 15 buses, 30 cars and 40 cell phones to make their stay as comfortable as possible, said Carlo Greco, the company&#8217;s agent for Naples and Salerno.

Naples is the carrier&#8217;s second port city visit in the Mediterranean. Last week, the crew got a little rest and recuperation time in Palme de Mallorca, Spain.

Where the sailors stopped wasn&#8217;t as important to Petty Officer 2nd Class Jesse Johnson as the fact they get some relaxation time, he said.